In this article, we will explain what the letters and the number means so you can decide the best Sheepadoodle generations that are right for you. 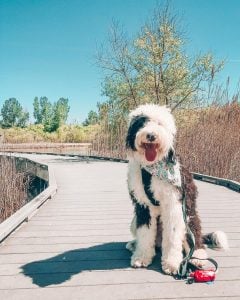 In order to understand the terminology, we will start with an example. In this example we will explain what “F1B Sheepadoodle means” so you get a good understanding of what the letters and numbers mean.

In a F1B Sheepadoodle the F represents Filial Hybrid. This may sound like a hard word, but it just means that this is a crossbred canine. All Sheepadoodle generations will begin with the letter F because they are a hybrid dog between the Old English Sheepdog and the Poodle. In other words, they are not a 100% purebred dog.

What does the number stand for in F1B?

Below is the genetic breakdown for the most common Sheepadoodle generations. This will show you the amount of Poodle genetics vs. Sheepdog genetics in a dog. In the section below, we go into more depth for each generation..

Pet owners prefer Sheepadoodles that have more Poodle genetics. Sheepadoodles are usually backcross bred to the Poodle for the nonshedding genes. However, it should be noted that there are some specific cases where a breeder may backcross breed to purebred Old English Sheepdogs in which case an F1B Sheepadoodle will be 25% Poodle and 75% Old English Sheepdog. However, these cases almost never happen. Check with your breeder if you have any doubts.

F1 Sheepadoodle genetics aren’t that desired by dog owners. This is because the genetics can vary significantly which will affect their looks. For instance, F1 Sheepadoodles can have straight coats that shed or curly coats that don’t shed. Since it is a 50% Old English Sheepdog and 50% Poodle, you won’t know what the genetics will be. Most pet owners usually would not prefer an F1 Sheepadoodle for this reason.

The F1 Sheepadoodles coats can be flat like the Old English Sheepdog or curly like the Poodle. However, it is worth noting that F1 Sheepadoodles gain the most health benefits of a health term called hybrid vigor. Hybrid vigor means the first cross between two purebred canines will almost always be healthier than any of the parent purebred canine. A purebred dog is basically inbreeding of the same genes which causes genetic defects over time. Since Sheepadoodles are a hybrid dog, they will only inherit genetic problems that is common to both the Poodle and Old English Sheepdog.

A F1B Sheepadoodle is 75% Poodle and 25% Old English Sheepdog. The F1B is by far one of the most popular generations of Sheepadoodle. Most of these dog breeders will claim that F1B Sheepadoodles don’t shed and are allergy-friendly.

The F1B Sheepadoodle has some distinct features that you will notice in this dog. First, F1B Sheepadoodles will almost always have a mostly wavy or curly coat that is inherited from the Poodle. The curlier the coat the more unlikely the dog is to shed. Also, this generally means that the canine is going to be allergy friendly than a Sheepadoodle with a flat or straight coat. The downside of a coat that doesn’t shed is that you will have to regularly groom your Sheepadoodle with pet clippers or take them to the groomers. Grooming your dog get’s very expensive unless you decide to do it yourself.

Secondly, F1B Sheepadoodles are likely to get the hereditary qualities of a Poodle, including the personality and temperament. It’s likely that they will have long legs, have tons of energy, require physical excise, and mental stimulation. If the F1B Sheepadoodle isn’t regularly exercised or mentally stimulated, they will get bored and may chew things around your house.

Regardless, this F2B Sheepadoodle generation has a majority of Poodle genes which gives the dog a wavy or curly coat. This implies that it’s like the Sheepadoodle will also have less shedding hair and be more hypoallergenic.

A F2BB Sheepadoodle is very hypoallergenic and non-shedding because of the large amount of Poodle hereditary qualities. This Sheepadoodle has the 2nd most Poodle genes, only behind the F1BB Sheepadoodle (87.5% Poodle, 12.5% Old English Sheepdog). F2BB Sheepadoodle will have a curly coat that will need to be groomed with dog clippers since the hair doesn’t shed. However, this Sheepadoodle generation is best for people who have pet allergies and don’t want to have to pick up their canine hair everywhere.