Each year, hundreds of French Bulldogs are surrendered to rescues and shelters. These dogs may be given up due to circumstances, and once surrendered, they’re not guaranteed a chance at a long and healthy life.

Many dogs surrendered to shelters are never matched with forever homes, and many are euthanized instead of placed with foster families. We’d love to encourage you to consider adopting a rescue dog for those reasons. Surrendered dogs are generally well-mannered and may be ready to join you and your family even if you have existing pets in your home.

Find a French Bulldog Rescue Near Me in Indiana 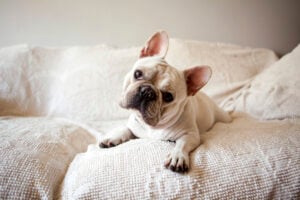 If you live in Indiana and would like to rescue a French Bulldog, check out this list. These shelters may specialize in the breed or host a variety of puppies, but one thing is for sure – adopting a rescue from these shelters will help ensure that a dog lives a happy and fulfilled life as a member of your family.

The first French Bulldog rescue on our list is the Indiana Bulldog Rescue. This group is focused on the rescue of bulldogs of all sorts, whether they be English, Old English, or French. They are Indiana-based, but there is no one physical location from which this shelter operates.

Instead, they’re made possible because of a network of rescue families and foster homes that care for your French Bulldog until you’re ready to adopt. You’ll be expected to extensively interview with the Indiana Bulldog Rescue before you’re permitted to adopt.

The group wants to ensure that each dog is placed with the home that will be their last, forever home. Adoptive families must live in western Ohio, Kentucky, or Indiana because you will be required to participate in a home visit. After you’re approved to adopt a bulldog from Indiana Bulldog Rescue, you’ll be permitted to bring home your dog for a trial week adoption.

During this time, both you and the rescue can determine whether the dog is a good fit for your family and your home. Should the match not work out, you can remain on the list to adopt another more appropriate dog for your family. The cost to adopt your puppy will range from $200 to $700, depending upon your dog’s age. You will need to sign an adoption contract before bringing your puppy or dog home to stay.

Hoosier Bulldog Rescue is another rescue “facility” that doesn’t have a physical location. The organization is run by a team of volunteers committed to ensuring that French and other types of bulldogs are homed with families who will love them forever. The group strives to accept and foster bulldogs from anyone who can no longer care for them, no questions asked.

You’ll need to meet the criteria before adopting a puppy, too. You can expect to pay between $200 and $800 for your dog, but the average cost to adopt is $650. You must apply to adopt a specific dog at Hoosier Bulldog Rescue – general applications are not accepted. There is a $10 application fee that is non-refundable.

Be sure you fill out all questions on the application to avoid rejection of your app. While most adoptions take place within Indiana, Hoosier Bulldog Rescue does consider out-of-state adoptions. Contact the team at the organization for more details on whether you may be eligible. Available dogs are frequently updated on social media, so check back frequently for information on available puppies.

As you may have assumed, Buckeye Bulldog Rescue isn’t located in Indiana but neighboring Ohio. The rescue allows out-of-state adoptions, but they will not ship dogs. You must be willing to travel to pick up your French bulldog from Indiana to adopt it from this facility. The adoption process at Buckeye is a little different than some other facilities.

First, you’ll have to choose a specific dog to apply to adopt. If there is more than one dog you’re interested in, you must submit multiple applications. The team at Buckeye Bulldog Rescue is very good at updating the status of each of its dogs online, so be sure to check back with the website often to view which dogs are available.

You will need to submit your application within a designated time frame. Once the application period is closed, the Buckeye team will review each application and choose the most suitable families for each dog. Fees must be paid in full at the time of adoption, and your dog will cost between $250 to $1,000 to adopt.

If you have limitations on what you can afford, please contact the team before applying for your dog. The cost of your dog will vary depending upon age, health, and other considerations, so the team may be able to work with you on finding a suitable dog for your price range.

Because of this, you’ll need to keep track of the available dogs listed on its social media; dogs and puppies are listed for 24 hours or until twenty applications are received. The “available” status will be changed, and the Rescue Network team will begin to find a suitable adoptive family.

You must pay a $10 application fee to be considered for a dog. This is non-refundable. Once you have been approved for a dog, you can expect to pay between $400 and $900 for your dog, depending upon your dog’s age and whether your dog is special needs.

The “heart” of the French Bulldog Rescue Network is located in West Hartford, Connecticut, but the team wishes to ensure that all dogs are suitably matched. They do operate in all fifty states, but if distance looks like it may impede making a good match happen, the group may be able to arrange to meet you.

Shipment of dogs isn’t ordinarily an option, but exceptions may be made in the case of placing special needs dogs. In addition to accepting adoption applications, the French Bulldog Rescue Network also seeks volunteers. If you have experience with the breed and are “vet-checked,” you may be eligible to help with events that are local to you or even to foster a French Bulldog until it finds its forever home.

Conclusion For The “Best French Bulldog Rescues in Indiana”

You may have always thought you’d adopt a brand new, bouncing little French Bulldog puppy. Have you considered giving your heart and home to a French Bulldog rescue? If you live in Indiana and are considering this breed for your home, why not take a look at the rescued puppies who are waiting to meet you?

Contact one of the rescue groups on this list to find your next forever puppy. You will be enriching the life of a canine companion and helping keep shelters from overcrowding while adding a valuable addition to your own family.

For more guides similar to this list of French Bulldog rescues in Indiana, you can check out:

Before you bring home a French Bulldog companion from a rescue shelter in Indiana, you can learn more about this dog breed by watching “Before You Own a French Bulldog” down below: