Here’s what you need to know if you’re searching for the best French Bulldog rescues in Oklahoma. One of the cutest dog species out there, French bulldogs are a sight for sore eyes.

Their mild temperament, adorable appearance, and endearing aura make them the ideal pet choice. As if this wasn’t enough, the American Kennel Club itself has ranked them as the 4th most favored breed of dog worldwide among dog lovers.

Because of this, many rescue organizations work around the world to shelter and rehabilitate these charming creatures. The French Bulldogs are also quite in demand which is why the adoption process isn’t quite as easy and is based more on the temperament and needs of the dog than on the choice of the applicant.

Find a French Bulldog Rescue Near Me in Oklahoma

Are you interested in raising a French Bulldog companion in Oklahoma? Do you need a companion that is both adorable and easy on the eyes? If you are a resident of Oklahoma, we can help you get a companion. Here are the top French Bulldog rescue centers that operate in and around Oklahoma to aid you in this quest.

The Tornado Alley Bulldog Rescue Center is a subdivision of the national BCARN organization. They work for the facilitation, medical care, food, shelter, and proper training for French Bulldogs that await adoption at their rescue center.

The TABR is proud to announce that it has successfully rehabilitated more than 200 dogs in recent years. They work by getting the rescued dog to a foster home as soon as possible, evaluating the medical and physical needs of the dog, and maintaining them until the dogs are ready to be adopted.

TABR receives these puppies by either their owners turning them in from breeding facilities or collecting them as local strays. They are dedicated to providing the best of the best for their dogs which is why it costs them a lot, and so they rely heavily on donations from philanthropists.

They are quite serious about training their dogs properly and cannot provide you with a french bulldog as soon as you apply. Instead, it is more likely that you’ll need to wait up to 6-8 weeks for them to get a dog for you. So if you are looking to adopt a well-trained, medically fit dog, the Tornado Alley Bulldog Rescue is your ideal choice. 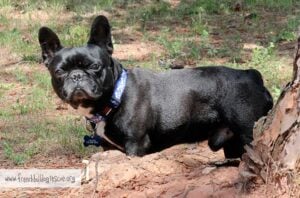 The French Bulldog Rescue Network is a non-profit rescue organization that works on a rescue with rehabilitation agenda. They rescue dogs from breeding facilities, other smaller rescue groups, shelters, and people. They boast of volunteers in all 50 states and Canada; in fact, their entire organization is a volunteer-based one.

Their volunteers are dedicated to providing quality training, nurturing, and basic medical care to their rescued french bulldogs. The FBRN works on sponsors and donations. They also allow for foster care for their rescued dogs. They have connected many handicapped puppies and those needing proper healthcare to foster homes that sponsor proper veterinary treatments for the cute dogs.

The FBNR has a proper channel for adoption. All of their rescued bulldogs are either spayed or neutered. All dogs are available on their website with detailed information for you to determine whether one of those dogs can be your ideal companion.

When you decide about one of these adorable puppies, you can submit an online application. They do, however, require a small adoption fee which is only a portion of their veterinary fees. They also adopt dogs for people in Continental USA and Canada, so do not hesitate to apply for dog adoption if you’re at a distance.

The Short Mugs Rescue Squad is mainly operated by a group of volunteers dedicated specifically to the rehabilitation and rescue of these endearing puppies. They rescue and rehome puppies from local animal shelters, owners who willingly surrender their bulldogs, commercial kennels, and even rescue private groups.

In addition to this, they also rescue breeds like English Bulldogs and Boston Terriers. The SMRS, however, does not allow adoption out of its operative state apart from Oklahoma and Louisiana. That, too, only on a case-to-case basis. In case of any returns, they don’t have any volunteers available in other states for the safe transfer and return of the dog.

Their application form is efficient and designed so that the dog finds itself a home that best suits it. By this, they get to match the dogs to specific families. Their adoption process comprises a detailed application review, visits to the vet, and home check-ins.

The application is not directed on a first-come, first-serve basis; instead, they narrow down the list of applicants according to the dog’s needs. They state that the best way to get picked would be to be as detailed as possible in your application. They also allow foster care and work on donations and sponsorships for their dogs.

They also have hospice dogs that are looking for sponsorships. However, they only allow the adoption of the dogs listed on their website and not ones still in foster care. So if you are a resident of Oklahoma and are looking for a french bulldog for a pet, the Short Mugs Rescue squad may be just the place you’re looking for.

Now that you know where all the great french bulldog rescues in Oklahoma are, you need to think about what you need to do to match up with the best dog for you.

It would be best to choose any of the 3rescues mentioned above, considering that any of the above would be an amazing choice. It would be best if you made sure to contact the rescue and book an appointment for a visit in person in this way. You can meet all the adorable dogs and take the one that fits your family best home.

Next up is the actual meeting with your dog. Now it can be both exciting and overwhelming but know that you can go at your own pace and that the people or trainers there can help you and the dog get acquainted.

Make sure that you read about the dog you want to meet and ask if the dog has any known and diagnosed health conditions, as every dog goes through vet visits and full checkups before being put up for adoption.

Committing to a new family member is a big decision, so making sure that you can handle the financial responsibilities for any of the dogs’ special needs is important.

As soon as you have an appointment, make sure to go through all the available dogs and the ones available by the date of your visit. Being thorough is the key to making sure that there are no accidental mishaps and the dog doesn’t have to go back to back to the rescue as it is very bad for the dog’s mental health.

Once you know that you want to take the dog to its new home, fill out the required documents and abide by any special policies set by the rescue shelter, as most of them have their way of making sure their dog is going to a good home.

Related: What is a Puppy Mill?

Conclusion For The “Best French Bulldog Rescues in Oklahoma”

Now that you know everything there is to know about French Bulldog rescues in Oklahoma, you can contact them in case of a stray dog, one who needs urgent medical care, or if you are looking for one to adopt.

For more guides similar to this list of French Bulldog rescues in Oklahoma, you can check out:

Before you bring home a French Bulldog puppy from a rescue shelter in Oklahoma, you can learn more about this dog breed by watching “Things You Can’t Have When You Own a French Bulldog” down below: