If you’re searching for the best Rottweiler breeders in the United States, you have come to the right place. Strong and protective, especially if trained and loved well – you can bank on your Rottie for life. The Rottweiler gets its name from the German town of Rottweil, known for villas with scarlet tiles.

Also referred to as the “Red Tile Dog” and “The Butcher’s Dog of Rottweiler,” this breed has been an essential part of Western European history. The origins of the Rottie can be traced to between 6 B.C. and 4 A.D when the Roman legions marched to Germany.

These soldiers brought along Rottie’s ancestors to conquer and set up colonies. The Rottweiler’s ancestor was used for strength-based activities, like transporting cargo and driving cattle. They still have that strength in their bones, making them excellent guards and police dogs.

Rottweilers were brought to America in the 1920s. When their popularity reached its peak in the mid-1990s, irresponsible breeders and puppy mills started to mass-breed these innocent beings. Little or no attention was paid to their quality and temperament.

As a result, Rottie puppies became notorious for their fierce personality and sensitive health. Demand for these dogs quickly dived. Some states even banned them. However, a well-trained Rottweiler is alert, wise, and calm.

They are devoted protectors who take their time to trust strangers. If you’ve bred them well and devoted time to supervising them, you’ve won the battle right there. Fortunately, some honest breeders do their best to conserve the American Kennel Club (AKC) breed standard.

Rottweiler Puppies For Sale in the United States

Finding Rottweiler puppies for sale in the United States can be challenging. Of course, everyone wants the best Rottweiler breeder to bring home a quality companion. When searching for your Rottweiler companion, you should always do your due diligence if you come across any potential puppy mills.

1. PuppySpot’s Rottweilers For The United States

We recommend future dog owners use PuppySpot’s platform because of how simple and easy to use. There’s no sign-up required to start browsing for Rottweiler puppies. With the link we provided below, you can immediately start your browse for available puppies. Once you find a Rottweiler puppy of your choice, you can contact the breeders to begin the quick application.

If you’re not the type of person to travel far – don’t worry. PuppySpot has a delivery program where the company will bring your Rottweiler safely and sound to your doorstep. They screen all the Rottweilers to verify they are state-licensed, USDA approved, and still pass a 100-point PuppySpot inspection. Less than 10% of breeders will pass all of these qualifications, so you can ensure that you aren’t buying from a puppy mill.

All Rottweiler puppies also come with a health guarantee and health inspection. PuppySpot is one of the few breeders networks with a private airline carrier to transport your puppy directly to you safely. It doesn’t matter where you are in the United States. We highly recommend that you check them out.

You can get $100 off a brand new Rottweiler puppy using coupon code “WLD100” at checkout! PuppySpot has given our readers an exclusive discount. 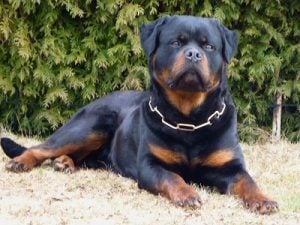 First on the list of the best Rottweiler breeders in the United States is “Von Evman Rottweilers.” A “Code of Ethics” Rottweiler Breeder, Von Evman Rottweilers, aims to produce attractive, healthy, and intelligent puppies. Breeding parents are certified by the Orthopedic Foundation for Animals (OFA), so puppies inherit fewer defects.

Aside from OFA health certifications, this breeder has belonged to the “Code of Ethics” Rottweiler Breeder community with the American Rottweiler Club (ARC) for over 30 years. Von Evman Rottweilers boasts of breeding the best 100% German bloodline and strives to follow a strict standard. They take great pride in being the “Silver Breeder of Merit” with the AKC. They also have a reputation for breeding Rotties with a long life expectancy.

Champ, one of their puppies, reached the grand age of 15 and a half years. He remains one of the oldest Rottweilers on record. A member of many prestigious clubs and organizations, they breed their puppies with a combination of beauty and brains. These puppies often become Registered Therapy Dogs and Service Rottweilers. Each Rottie is kept in a spacious fenced-in yard with a house with doggy doors to facilitate free movement. 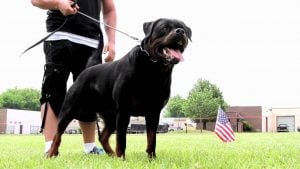 When the breed’s popularity was rising in 1992, the owners of Carrabba Haus bought their first Rottweiler from a reputable breeder in Pennsylvania. They fell in love with the breed as they attended various Rottweiler shows and trained dogs. In 2000, they imported their first dog from Germany.

Having spent a great deal of time studying Rotties, they have identified common mistakes by breeders:

These mistakes make a difference in the puppies produced and affect bloodlines for generations. They believe proper upbringing is as crucial as genetics for breeding the perfect Rottie. That’s why they utilize the latest and best practices in nutrition, health, and character development. Their foundation-building methods give their Rotties an edge over dogs from other breeders.

They are firmly against spoiling their dogs. Using a tough-love philosophy, they train the dogs to think that playing with humans is rewarded for good behavior. They devote hours to training each puppy with socialization techniques. This approach has produced extremely well-behaved yet playful Rottweilers. 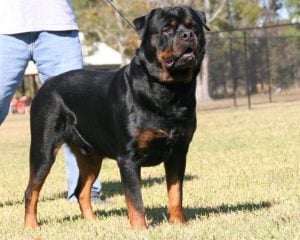 Warren Johnson established the kennel in the spring of 1991. When Warren was called to pastor a new church a decade later, this commitment prompted a change of ownership. Since 2015, Jerry Scott has been the owner and operator of the kennel. Scott continues to breed dogs in Texas using the principles and philosophy of the original owner. Von Warterr produces show-quality Rottweilers with sound temperament and an imposing appearance.

Aside from beauty, these canines possess great intelligence, excellent health, and a reputable pedigree. This breeder takes pride in offering quality show dogs that can also serve as security and protection. They do not breed pet-quality dogs to eliminate any faults in the bloodlines. They take a scientific approach to Rottweiler breeding and endeavor to whelp litters with a strong bone structure and substance. Von Warterr boasts of show-quality dogs affectionate, with a drive to protect their family and environment. 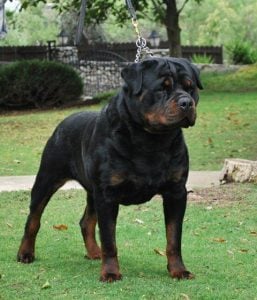 When undergoing hip evaluations, nine out of ten Von Ruelmann offspring receive passing ratings from the OFA. This kennel offers 100% breeder support and encourages buyers to keep in touch with them when they need to do so. Clients can avail of either shipping or pick-up options once puppies reach eight weeks. Temperament tests for each litter are finalized when the puppies reach seven weeks. This stringent process helps determine which home best matches each puppy based on their personality.

Their 20 years of experience have bred few litters and maintained their “one of the top pedigrees” reputation. They try to produce healthy, well-tempered dogs that conform to the European standard drawn for Rottweilers. The team at Central Valley Rottweilers believes that undesirable traits like missing teeth starts are caused by overbreeding.

Dogs are served a special diet that keeps them in the best shape possible, and conditioning and training as part of their lifestyle. They are kept on a strict eight-week deworming schedule and monitored for infections and parasites. They also get tested for dysplasia, healthy hearts, Juvenile Laryngeal Paralysis & Polyneuropathy (JLPP).

Conclusion For The Best “Rottweiler Breeders in the United States”

Rottweilers are fiercely protective and watchful of threats from intruders. However, you must train them to be friendly with neighbors and other trusted individuals. They make brilliant pets, thanks to the following traits.

For more articles with mentions of the Rottweiler dog breed, check out:

To see the affection of a Rottweiler dog, watch “Rottweilers Reaction to Seeing Owner After 3 Months” from HAUS OF RAUCHIGROTTS down below: