Most Labradoodles are great for people who have pet allergies and are nonshedding since they contain a lot of Poodle hereditary qualities. The downside of having a nonshedding Labradoodle is you have to groom your dog’s hair all of the time since it doesn’t fall out. Grooming incorporates bathing, brushing, cutting their hair, and nail trimming! Labradoodle grooming is generally pretty simple once your Labradoodle becomes accustomed to hair cutters, scissors, and nail cutters.

Also, check out all the different types of Labradoodle Haircuts. 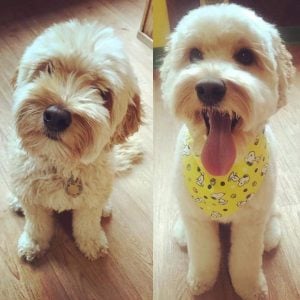 Labradoodle Grooming is very troublesome if you don’t have the correct tools and instruments. Thus, we have created a Must-Have Tools and Optional Tools list to help you groom your Labradoodle.

How to Groom a Labradoodle 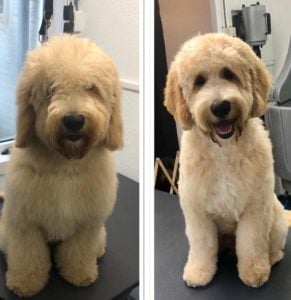 In short, we will bathe, brush, cut, and nail trim our Labradoodle. In the event that this is your first time, I would designate a few hours to completely groom your Labradoodle.  The first time grooming your dog is always the hardest, and you’ll get quicker the more you do it.

Tips Before Your Labradoodle Grooming 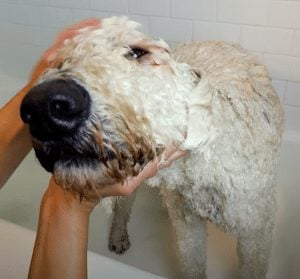 The best way to start Labradoodle grooming is by bathing your dog. Washing with a cleanser and conditioner makes it simpler to brush which will remove tangles and mattes. If you’ve never given your dog a bath, it’s very simple.  Splash some water on your dog and rub in the shampoo and conditioner like you would for a normal shower! Try to stay away from your dog’s eyes as they are normally a sensitive area to clean. Next, wash the shampoo off your Labradoodle with water and apply the hair conditioner. Lastly, rinse your pooch and dry them with a towel. 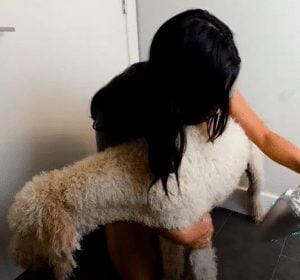 Some of the time Labradoodles hate grooming and you will need to get a muzzle to keep from biting or snapping at you. However, I would try positive reinforcement and lots of treats first since Labradoodles are generally nonaggressive.

You’re going to need to brush your Labradoodle before utilizing the pooch hair scissors. On the off chance that you don’t get the mattes and tangles out, at that point you won’t have the option to shave through them. Start by utilizing the slicker brush and afterward switch over to brush. When you evacuate the vast majority of the mattes then you can prepare to prep your Labradoodle. 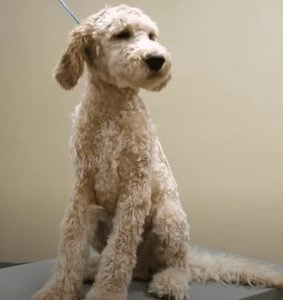 Grooming a Labradoodles Back 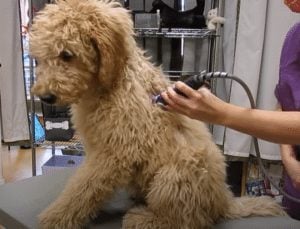 If your Labradoodle is squirming too much, have a go at trimming their leg hair from top to bottom (paw). 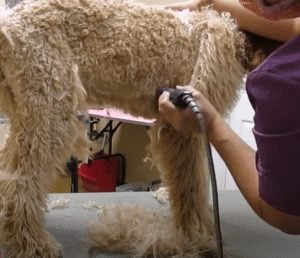 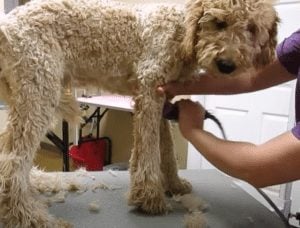 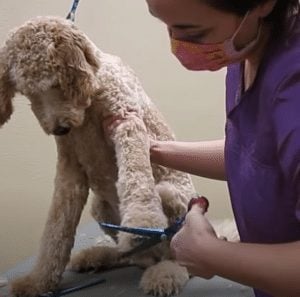 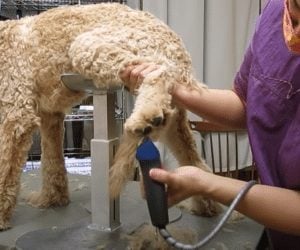 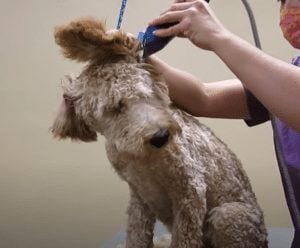 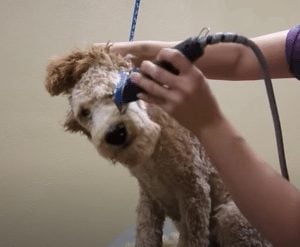 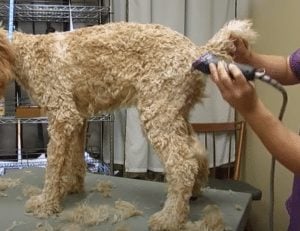 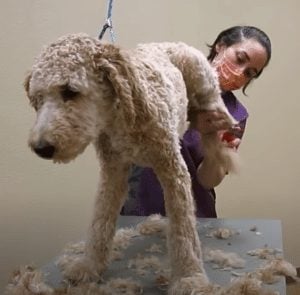 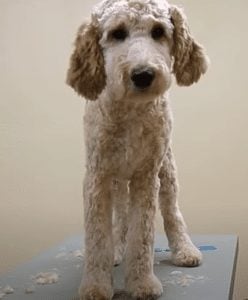 On the off chance that this is your first time, Labradoodle grooming might seem incredibly troublesome since it will probably take you a few hours. Try not to stress, the procedure gets quicker once you have the correct tools and your Labradoodle becomes acclimated to grooming. Once you get good at grooming your dog, you can usually finish in just over an hour.. Labradoodle grooming isn’t just fun for dog owners because you can create your own hairstyles, but it also saves you a ton of cash over the long haul.

Other Articles to Read:

How often do you groom a Labradoodle?

When do you groom a Labradoodle puppy?

Generally, Labradoodle owners wait between 4 and 6 months to groom their Labradoodle puppy coat.  This is because puppy coats don’t get as many mattes and tangles as the adult coat. In addition, this allows your Labradoodle to get all the necessary vaccinations needed to go to a groomer.

Do Labradoodles need to be groomed?