If you’re wondering about Labradoodle coat changes, then this guide has everything you need to know. Labradoodles are one of the most popular dog breeds in the world. A cross between a Labrador Retriever and a Poodle, an owner can have the best of both worlds. Intelligent, playful, and loyal, the Labradoodle becomes an instant friend and splendid companion. One of the biggest questions, however, what if Labradoodle coat changes? When deciding which Labradoodle to make a member of the family, keep in mind that their coat might change over time.

Labradoodle coats experience changes with age, such as between puppyhood and adulthood, and well into their senior years. Not only is the texture affected, but so is the color. Sometimes, a Labradoodle’s coat will get darker or lighter, depending on their genetics. The guide below will provide all the information concerning a Labradoodle’s coat. Learning about their coat is as significant as the grooming process. 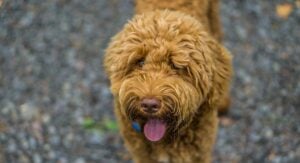 Depending on the generational mix, Labradoodles have three distinctly different coat types. An F1 Labradoodle is the first-generation puppy of a Labrador Retriever and Poodle. The F1B generation is a Labradoodle and a Poodle mix. Each of the coats will vary in feel and look, and specific grooming requirements.

Not a common type of coat for a Labradoodle, but it’s one that resembles the texture of hair rather than fur. Labradoodles born with this coat don’t resemble their counterparts in the least, and often look scruffy. On top of that, this hair is not noticeable until they turn a minimum of 12 weeks old. Straight-coated Labradoodles will have straight fur around their muzzles. They will also have a teddy bear-like appearance in general. Of course, since this type of fur resembles hair, it’s more prone to shedding, which isn’t always desirable.

Labradoodles with a fleece coat are the most common, and it’s the easiest to maintain. Low shedding, this soft coat only requires a brush once a week to make it looks pristine. Kemp, or coarse, hair is found around the eyes of Labradoodles with a fleece coat. The rest of a fleece-coated Labradoodle ranges from slightly wavy to curly. This is one of the most desired coats, especially for someone with allergies. Their coat is less prone to shedding or triggering an allergic reaction. Often referred to as shaggy, this fleece coat is the typical look for a Labradoodle.

Often referred to as just curly, a wool-coated Labradoodle is the second most common Labradoodle. Though how tight the curls actually are solely depends on the puppy’s genetics, they are more likely to resemble their Poodle parent. The F1B generation of Labradoodle is more likely to have this coat, which is a good question for the breeder. One reason they’re so popular is how easy they are to maintain. Most owners will have the fur-trimmed short, requiring only a weekly brushing. They’re also more allergy-friendly and considered hypoallergenic.

A Labradoodles color can range drastically, depending on their genetic and immediate parents. With a color to suit any potential owner, the important piece of information to remember is that it can change.

Some Labradoodle colors available are: 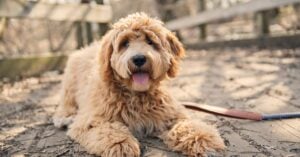 A Labradoodle does not get to keep the coat they’re born with into adulthood. Unfortunately, this soft and inviting coat will begin to change somewhere between 6 and 12 months, though the number is not a fast rule. Some pups will lose their coats sooner and some later than others, but it is something to expect. When the coat is going through its transition, as the owner, you will notice quite a bit more shedding than normal. Even in pups that have curlier fur, shedding is unavoidable during this time.

The best way to get through the time of shedding is to brush your Labradoodle as much as possible, helping the fur come off and prevent matting.  Once the process is complete, the puppy, closer to adulthood, will sport a coat of different colors and textures. Of course, the type of coat the puppy was born with won’t change to another type of coat–straight won’t suddenly become curly. There will be changes in the texture, so slightly curly might get curlier, and the color will change. 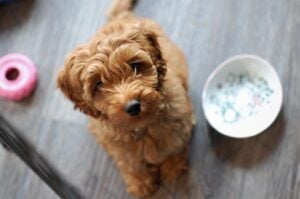 Once a puppy grows into its adulthood coat, it’s unlikely to change its type of texture. The color, however, is something that is still subjected to change as the puppy grows into adulthood and then becomes a senior. Some of the changes will depend on the original coat color. 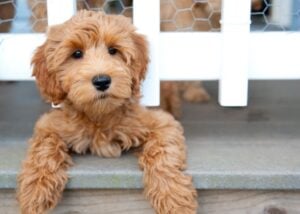 Though not always common, there are other factors because of time and genetics that will change the coat of a Labradoodle.

A Labradoodle will go through many changes in its life, ones of the most significant ones are to the coat’s texture and color. Sometimes in the first year of the puppy’s life, they will shed the coat they’re born with as their adult coat grows in, usually with some changes. With age, time, and even the climate, a Labradoodles coat color will probably change. Some colors, such as cream or white, are lucky in that they don’t fade over time, but most others do, giving the puppy a much different appearance later in life.

Even something as simple as getting the dog properly groomed may cause the fur to appear a slightly different color. Since Labradoodles go through these changes, choosing your newest companion when they’re a puppy should never be made based on the coat they’re born with. Instead, it’s best to look at previous litters to see what types of coats offspring had. Coat and color are important to many owners, but it’s also important to remember their loyalty and playfulness.

For more articles with mentions of the Labradoodle breed, check out:

To learn more about this topic, watch “Labradoodle Puppy Colors and Patterns” from Van Isle Doodles down below: