When people hear the word “Labradoodle,” what comes to their minds is the Red Labradoodle. Red coat colored Poodles are unusual, which explains why it is rare to find a red Labradoodle. The red Labradoodle’s coat is a replica of that of an Irish Settler dog. You can tell a true red Labradoodle by looking at their nose. If the nose pigment color is black, then you’ve got yourself a true red. Authentic red Labradoodles are pricey when compared to other colors because they are in higher demand and rarer.

Labradoodles that are red are hard to breed and you’ll often get a litter with many different coat colors.  Labradoodles have an extensive range of coats because they are a hybrid dog breed that can carry several dominant and recessive coat colors. If you take a look at the American Kennel Club (AKC), the purebred Poodle has over 10 different standard coat colors.

You can cross a standard, miniature, or Moyen Poodle with a Labrador Retriever to produce various sizes of Labradoodle puppies. Red Labradoodles come in three main sizes:

Related: What Labradoodle Size is Best?

However, if you have a nonshedding red Labradoodle, you’ll have to frequently groom and brush them to get rid of debris and trapped shed hairs. If you fail to do so, the results may be mats and tangles that irritate your Labradoodles skin and can lead to infection. 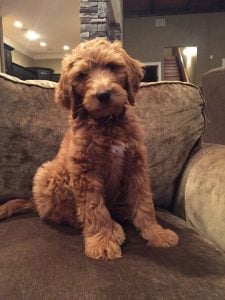 There has not been any study to show how the red coat in Labradoodle dogs relates to their temperament. However, according to a study involving Cocker Spaniel dogs, different coat colors show different personalities and temperaments. Golden-coated Spaniels were found to be more dominant than parti or black color dogs. Also, male dogs have a more dominant character than females.

Due to a lack of scientific evidence, we cannot say how the red coat color relates to Labradoodles’ temperament or personality. However, Labradoodles did not become popular because of their non-shedding nature alone. They make great companion dogs, and people love how pleasant and friendly they can be. Since they inherit genes from the Labrador Retriever, you’ll find many Labradoodles that are therapy or service dogs due to their easygoing temperament.

Red-colored Labradoodles are quite playful and rambunctious. This is expected of a mix of the Labrador retriever and the Poodle – two dogs with strong people-pleasing personalities. In general, they are considered easy to train, and they make excellent companions pets. You can never overstate the importance of socialization and positive training for your dog.

Labradoodle dogs have a good reputation with kids. However, they require proper training and socialization. If you don’t train or socialize your Labradoodle, they can become aggressive in certain situations. 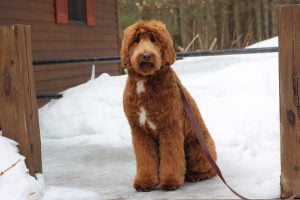 Dogs get ill from time to time, and many pedigree dogs are more likely to be sick than other dogs. On the other hand, hybrids are not as susceptible to illnesses as the pure breeds, thanks to hybrid vigor. However, you can check how healthy your Labradoodle pup is by looking at his parents’ health.

The Labrador and the Poodle come from a long lineage of hunting and working dogs. They are both natural athletes. Labradoodles are very happy and healthy when you give them enough room to play, exercise, perform other activities, and get enriched. After all, a tired Labradoodle is a well-behaved one.

As a responsible breeder, you must test all Poodle, Labrador Retriever, and Labradoodle parents for inheritable health issues listed below.

Red Labradoodle puppies tend to be a bit more expensive than other coat colors. The cost of purchasing a Labradoodle puppy is within the range of $1,500 to $3,000+. We wrote an in-depth article on How Much Does a Labradoodle Cost, which will provide you with the latest pricing. 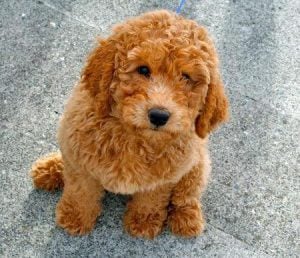 The right breeder can greatly influence the temperament and health of your Labradoodle puppy. Ensure that you chose a breeder that offers verification of health testing, genetic testing, an initial health guarantee, and required vaccinations. In addition, make sure that any Labradoodle breeder properly socializes their puppies with early neurological stimulation and other techniques.

Red is one of the most unique among other Labradoodle colors. While some people prefer red, others would instead go for another color. We can’t say which color is best because it’s a matter of personal preference. Labradoodles are playful, energetic, and great companion dogs. So, if these qualities are what you’re looking for in a pet, you should get a Labradoodle. We hope you enjoyed learning about the red Labradoodle!

To learn more about the Labradoodle dog breed, visit:

If you want to see what the red Labradoodle looks like in action, watch “We Got a Puppy! Bringing Home Our 8-Week Old Labradoodle” from Brenna K. Lyons down below: