If you’re raising a puppy, you’re probably wondering when do Labradoodles stop growing. The Labradoodle dog breed grows extremely fast the first 10 months of their life and it may seem like they will never stop growing. A good rule of thumb is that Labradoodles are 97% of their total body weight by the time they are 12 months old.

If you want the full metrics, we did a study on “When is a Labradoodle Full Grown?” At the 18 week mark, you should be able to double your Labradoodles total weight and that’s when they will stop growing. However, their weight and when they stop growing depends on a variety of factors.

When will my Labradoodle Stop Growing? 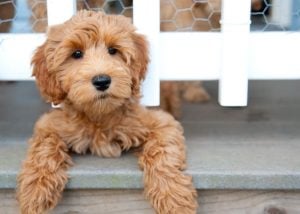 Based on the recommendations of the Australian Labradoodle Association, the cross-breeding to produce Labradoodles should be for three sizes which follow the Poodle sizes:

Determining the age at which your Labradoodle will stop growing can be quite tricky as this subject to the genes inherited from either the Labrador Retriever or Poodle. However, on a general basis, Labradoodles are considered to be adults after 52 weeks old. The reason for this is hinged on the fact that at 52 weeks, the Labradoodle would have grown 97% percent of its body features. However, nutrition and diet also play a big role in how much your dog will potentially weigh.

Therefore, it is important that you always engage in activities that will help your Labradoodle stay fit and healthy to avoid obesity in its adulthood. You should also note that Labradoodles grow according to their sizes (Mini, Medium, and Standard). By the time your Labradoodle has hit 2 years of age, you can expect it to stop growing fully irrespective of which parent’s genes and characteristics are dominant.

Related: What Labradoodle Size is Best? 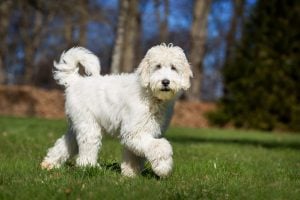 As we highlighted earlier, there are 3 different sizes of Labradoodles based on the parents’ genes during crossbreeding. Contingent on what the size the Poodle is, you can expect your Labradoodle when fully grown to look like this:

Another way by which you can determine the weight of your Labradoodle (especially the mini and medium sizes of LDs) before they fully become an adult is by multiplying its weight at 18 – 19 weeks by 2 i.e.

On the other hand, to determine the weight of your adult standard Labradoodle, you simply multiply the weight at 23 – 25 weeks by 2 i.e.

Please note that these methods are effective but might not be fool-proof. 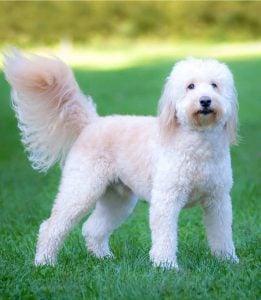 Related: How Much Does a Labradoodle Cost?

Conclusion For When Do Labradoodles Stop Growing

No matter what size of Labradoodle you choose, you are guaranteed a good companion. Although, they are not yet recognized by the American Kennel Club (AKC) because they are a hybrid dog, the size of a Labradoodle is subject to the genes that are dominant during the crossbreeding. In general, Labradoodles will be 97% of their body weight after 1 year old and be fully grown by 2 years old.

For more questions about the Labradoodle, check out: