The curiosity around the Blonde Labradoodle has raised many questions and interests around the world. You’re probably wondering what makes this Goldendoodle coat color different from the others. In this Blonde Goldendoodle guide, we’ll break down everything you need to know about these multicolored beauties, including:

With their intelligence and affection, Labradoodles are perfect as service companions. They are also perfect with family-oriented households and children. Many people are seeking a more cream and yellow-colored Labradoodle so we’ll explain everything you need to know about the blonde Labradoodle breed.

The Blonde Labradoodle traces its origins to Australia. In the late 1980s, Willy Conron was trying to create a Poodle hybrid at the request of a visually impaired lady in Hawaii. The lady wanted a service dog but was allergic to dogs. In 1989, Conron cracked the code and created Sultan, an Australian Labradoodle. Willy Conron’s action led to a variety of Doodle breeds we have today.

When the Australian Labradoodle was originated, many people begin to understand its intelligence, the benefits of its curly coat, and its perfect temperament. When Sultan, the first Australian Labradoodle arrived in Hawaii met his owner, the connection was perfect. Sultan’s character, abilities, and personality were admired by many people in Hawaii and across the world. This is what prompted Doodle’s popularity, demand, and increasing supply. Unfortunately, in 2019 – Willy Conron said that he regretted creating this designer breed and that it’s one of his deepest regrets in life.

People had speculations that Willy Conron regretted this decision because of the unethical breeding practices. Aside from Willy Conson, some people believe that the Labradoodle originated in the 1950s. There isn’t much information about its history other than Sultan’s introduction in the 1990s.

Blonde Labradoodles are famous for their intellect and friendly nature. They receive all people and dogs (if well trained) with open paws and a bone of friendship. When it comes to family, these doodles love to experience life with their humans by being active. You will need to include them in your family activities and engage their mind. That being said, Blonde Labradoodles can be quite the task. They are naturally very playful and lively. If you’re not keen, you might notice your Blonde Labradoodle has a penchant for extreme roughhousing.

The average lifespan of a Blonde Labradoodle is anywhere from 12 to 15 years. This is dependent on lineage, hereditary, and lifestyle choices. You can extend your Blonde Labradoodle’s lifespan by ensuring their medical, psychological, physiological needs are met. This can be something as little as taking your dog for daily 30 to 45-minute walks or as big as overhauling their diet in consultation with your vet to ensure your doodle is eating healthy.

The Blonde Labradoodle tends to be healthy and strong. With healthy parents and good lifestyle choices, the blonde labradoodle will live for many years. That being said, there are a few health issues you need to be aware of.

By maintaining your dog’s regular checkups with the vet, you have a better chance at beating any of these issues if your dog develops any of these conditions. Keep in mind some of these issues are hereditary. By doing your due diligence when selecting a Blonde Labradoodle breeder, you will be able to save yourself the heartache.

The first 4 months of a Blonde Labradoodle’s life are the most crucial in their development. As the owner of these blonde beauties, you will need to ensure your doodle gets trained and socialized the right way. You can choose to do this by yourself or get an extra pair of hands through professional dog training. Either way, we recommend you do a few lessons with your doodle to continue building trust and connection. Blonde Labradoodles are easily trainable so this might not be a hassle for you.

The average price of a Blonde Labradoodle ranges from $1,500 to $3,500 depending on the doodle’s size. The price in your state may be higher or lower due to factors such as location, demand, breeder’s reputation among others.

How To Find A Blonde Labradoodle Breeder 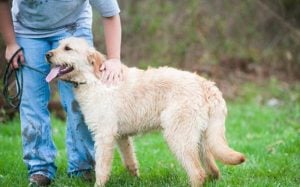