Why does my dog lick my underwear? Here’s what you need to know before diving deeper into the topic. Dogs are incredible companions. Dogs can sense your emotions and give you comfort. They also like to go on adventures and keep you company in different settings.

However, that doesn’t mean that they also don’t have some gross habits that can be pretty confusing to us. A particularly annoying, gross, and puzzling dog behavior is licking underwear. If your canine companion digs into the laundry, it can be puzzling why they end up licking your underwear.

If this has happened to you, you might wonder, why does my dog lick my underwear? Why not my pants, shirts, or anything else? If your dog has been acting this way, you have come to the right place. This article covers everything you need to know about why your dog is licking your underwear.

By the end of this article, you will learn about dogs’ sense of smell and taste, how that impacts their decision to lick your underwear, why your dog is licking your underwear, and what can be done to stop this behavior.

Before you scroll down to a more in-depth answer to this guide, “Why Does My Dog Lick My Underwear,” you can check out these other dog-related questions answered by our team at We Love Doodles: Why Does My Dog Eat Grass Frantically and Why Does My Dog Roll Around After Eating?

Dog’s Sense of Smell and Taste

The primary reason why your dog is licking your underwear is that they have a keen sense of smell and taste. Smell and taste are primary senses that dogs use to interact with the world. Just as humans like looking at and touching things, dogs want to smell and taste something.

Dogs smell and taste things to identify friends from foes, what is safe to eat, and satiate their curiosity. Dogs’ sense of smell and taste is much more advanced than humans. Dogs have an organ in their nose called the vomeronasal organ or Jacobson’s organ.

The Jacobson’s organ allows them to process smells differently than humans and identify a broader range of scents. Dog experts estimate that dogs have a sense of smell over 100,000 times stronger than humans. Their high-powered olfactory abilities allow them to pick up things like pheromones and other scents that we cannot even begin to detect.

In addition to their incredible sense of smell, dogs also have a great sense of taste. Dogs have around 1,700 taste buds, while humans have approximately 9,000. However, that doesn’t mean that dogs have a weak sense of taste. Dogs’ tasting abilities differ from humans in that they can taste water and salt but not sweet things.

The difference in how dogs taste things is because they lack something called the sucrase-isomaltase gene. This gene is responsible for the ability to taste sweet things. All mammals have this gene except for dogs, foxes, and wolves. The combination of an advanced sense of smell and taste allows dogs to identify various scents and flavors and is the primary reason your dog likes to lick your underwear.

More Dog Guides: Why Does My Dog Nudge Objects With His Nose?

Reasons Why Your Dog Is Licking Your Underwear

Now that you know why your dog is licking your underwear let’s look at why your puppy engages in this behavior.

1. Your Dog is Curious and is Attracted to a Smell

The most common reason your dog is licking your underwear is that they are attracted to the smell. Dogs are curious creatures and constantly explore the world through their sense of smell.

Your dog is probably smelling your underwear to figure out what it is and why it smells the way it does. In addition, dogs are also attracted to certain smells. Just like humans, dogs have their scent. Your scent might tempt your dog, which is why they are drawn to lick your underwear.

Related: What Smells Do Dogs Hate?

2. Your Dog Could Be Attracted to Your Underwear’s Pheromones

Another reason your dog is attracted to your underwear because it contains pheromones. Pheromones are chemicals released by the body that impact the behavior of other individuals. Pheromones play a role in many mammalian behaviors, such as social bonding, mate selection, and territorial marking.

3. Your Dog Doesn’t Have Much Attention, or It’s Bored

In addition, if your dog is bored, it may turn to your underwear to entertain itself. Dogs are known for their destructive behaviors when bored, such as chewing on furniture or digging holes outside. Licking your underwear may be your dog trying to find something to do.

Related: Why is My Dog So Obsessed with Me?

4. Your Dog Could Be Dealing with Stress and Anxiety

One of the less obvious reasons your dog may be licking your underwear is because of stress or anxiety. Dogs can suffer from stress and anxiety just like humans. When stressed or anxious, dogs may engage in repetitive behaviors like licking. Compulsive licking is a common symptom of anxiety in dogs. If your dog is licking your underwear compulsively, it may be a sign that they are stressed or anxious.

5. Your Dog Probably Has a Poor Diet

Your dog’s diet could also influence your dog to lick your underwear. Dogs need a balanced diet to stay healthy. If your dog is not getting the nutrients it needs, it may turn into weird behaviors like licking your underwear.

A lack of specific vitamins and minerals can lead to deficiencies that can cause several different problems. For example, a lack of zinc can lead to skin problems like dermatitis, making your dog more likely to lick its owner’s underwear to soothe its skin.

Additionally, if your dog is iron deficient, it may try to lick any period of blood stains on your underwear because blood contains high iron levels. Talk to your veterinarian if you think your dog’s diet may cause its licking behavior. They can recommend a balanced diet to meet your dog’s needs.

6. Your Dog Probably Has Poor Hygiene 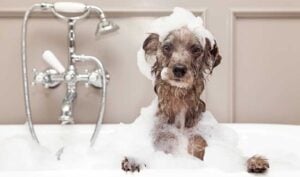 The bacteria that cause this odor may also be attractive to your dog. To avoid this issue, make sure you are showering and washing your underwear regularly. It would be best to keep your underwear where your dog cannot reach it, such as in a dresser drawer.

7. Your Dog Could Be Seeking For Your Attention

In addition, if you often punish your dog when it licks your underwear, it may continue to do so as a way to get your attention. Dogs are known for their attention-seeking behaviors, such as barking or chewing on furniture.

If you think your dog is licking your underwear for attention, try to give it more attention throughout the day. Play with it, pet it, and give it treats. Additionally, do not punish your dog when it licks your underwear. Punishment will only reinforce the behavior and make it more likely to continue.

8. Your Dog Has an Obsessive Compulsive Disorder 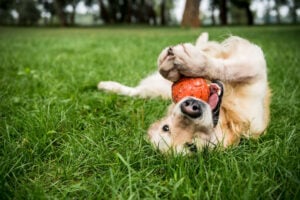 Dogs with an obsessive-compulsive disorder may lick their owner’s underwear because it is a part of their compulsions. If your dog is licking your underwear obsessively, it is essential to talk to your veterinarian. They can help you create a treatment plan to help your dog.

9. Other Dogs Could influence your Dog

Additionally, if you have a dog that is often aggressive, your other dog may start to lick your underwear to try to defuse the situation. If you think another dog influences your dog’s licking behavior, try to keep them separated. Separating your dogs may require crating or penning your dog when you are not home.

10. Your Underwear Reminds Your Dog of its Toys 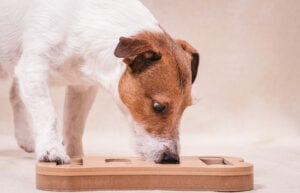 If your dog often plays with toys, it may start to lick your underwear because it smells like its favorite toy. Confusing toys and other items is especially likely if you have a puppy still learning to differentiate between toys and other objects.

Related: Best Indestructible Dog Toys and Are There Sexual Toys For Dogs Humping?

How to Stop Your Dog from Licking Your Underwear

Now that you know the various reasons why your dog is licking your underwear, you are probably ready to get them to stop this behavior. Thankfully, there are several effective methods to prevent this from happening.

Use positive reinforcement whenever your dog is not licking your underwear. You can accomplish this by giving your dog treats, verbal praise, and pets when it behaves correctly. Keep your underwear out of reach by putting it in a drawer or hamper your dog cannot access.

Consider using a bitter-tasting spray on your underwear. This spray will deter your dog from licking your underwear since the unpleasant taste. Talk to your veterinarian. If the problem persists, there could be an underlying medical condition causing it. Get help from a professional dog trainer.

Conclusion For “Why Does My Dog Lick My Underwear”

So, if you’ve ever asked yourself, ‘why does my dog lick my underwear,’ you can rest assured knowing they do it for various reasons, most of which are innocuous, such as attention-seeking and boredom. However, others are more problematic, such as anxiety and even compulsion.

If your dog is licking your underwear, there are several things you can do to get them to stop. The most important thing is to be patient and consistent with your dog. You can get your dog to break this unwanted behavior with time and effort.

If you find this guide, “Why Does My Dog Lick My Underwear,” helpful, you can check out these other dog-related questions answered by our team:

You can learn more about why your dog would lick your underwear by watching “Why Do Dogs Lick Everything” down below: