Within the last 10 years, the doodle has become one of the most popular dog breeds in the world. It’s very likely that you have heard of one of these Goldendoodle, Labradoodle, or Bernedoodle dogs because they are considered to be mostly nonshedding and hypoallergenic. Thus, these dogs are great if you hate vacuuming and you have any mild form of pet allergies.

Today, we will talk about a relatively new form of doodle which is called the “double doodle”. A double doodle just means that it is a dog that is mixed with two different doodle types. We will also talk about what it means to be a “mini double doodle”.

What is a Double Doodle? 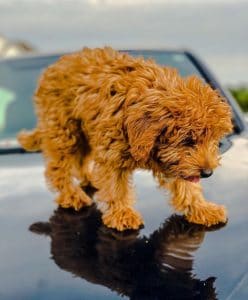 Double doodles are a relatively new form of dog breed that is a mix between two doodles. For instance, if an F1 Goldendoodle and an F1 Labradoodle breed together, they would form a type of double doodle.

What about a Mini Double Doodle?

A mini double doodle is bred between two doodle dogs and is less than 30 pounds. They usually stand around 16 to 18 inches tall depending on the type of doodle breed and the amount of Poodle genetics (Poodles usually have long legs). 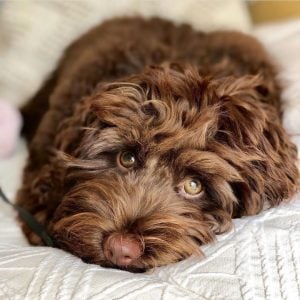 By far the most common double doodle is going to be a Goldendoodle Labradoodle mix which also goes by the name as Golden Labradoodle. The Goldendoodle and Labradoodle are the two most popular types of doodle breeds due to nonaggressive temperament and beautiful looks. Additionally, they inherit outstanding genes from the Poodle that make them nonshedding and hypoallergenic.

It’s worthwhile to note that the Goldendoodle and Labradoodle come in several different types of coat colors, so it’s virtually impossible to know what your double doodle will look like without observing the parent dogs. The standard double doodle sizing is going to be a mini, medium, and standard sizes. 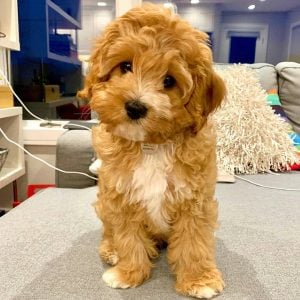 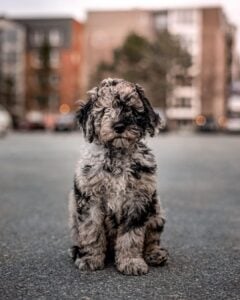 The Aussiedoodle Goldendoodle mix is a type of double doodle that is trending in popularity because of the merle colored coat. In addition, one of the biggest downsides of an Australian Shepherd is they shed a lot of hair all over the house and your clothes. Combining an Aussiedoodle with two different types of doodles makes this dog a lot less likely to shed. This is because an Aussiedoodle is only going to be roughly 25% or less Australian Shepherd genetics. 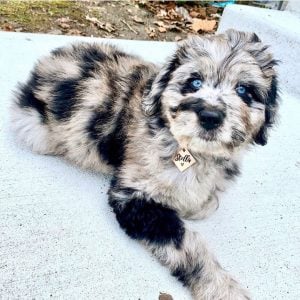 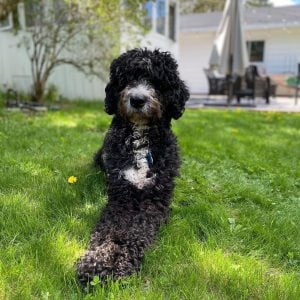 The Golden Mountain Doodle is a Bernese Goldendoodle Mix and is one of the most popular double doodle breeds.  The Bernese Mountain Dog and Goldendoodle are a trending dog breed because of the tri-color coat including the colors black, brown, and white. This breed is considered highly trainable, and less energetic than a standard Goldendoodle. So if you’re looking for a dog that is multi-colored and isn’t going to have a crazy amount of energy like the Goldendoodle then this might be the right choice for you.

The three most common double doodle sizes are going to be mini, medium, and standard. We explain more information about each size below. 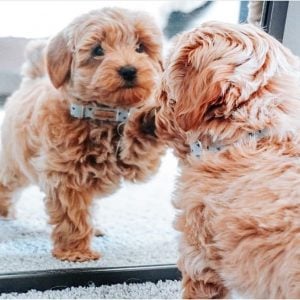 However, as a general rule of thumb, you shouldn’t be buying double doodles that are less than 20 pounds. This weight is unnatural to the doodle breed. The way that you create the micro double doodle is that you selectively breed the “runts” of each litter to get smaller and smaller dogs. This inherently creates health and genetic issues for your mini double doodle. 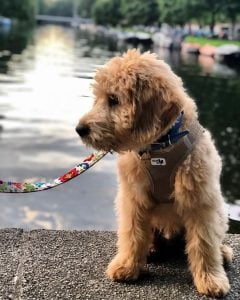 The medium double doodle size is generally considered to be a dog that is between 20 and 45 pounds. They generally range in height from 18 inches to 21 inches depending on the exact breed of double doodle. 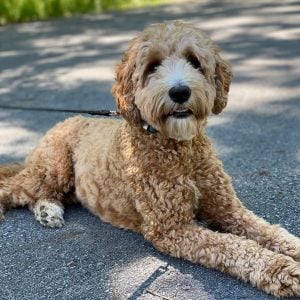 The standard double doodle is the largest size double doodle that weighs more than 45 pounds. These are going to be big and tall dogs so you’ll likely need a big backyard or live an active lifestyle to get their energy out. Since double doodles are extremely smart dogs, if they don’t adequately release their energy every day, they will engage in destructive behavior around your house chewing on objects or scratching at things.

However, the standard double doodle is big enough to provide someone with a sense of security and is great for people who like larger dogs. The bonus of having a standard sized double doodle is that they don’t shed a ton of hair like most other big dogs. You won’t have to vacuum the dead hair every day from your dog’s coat. 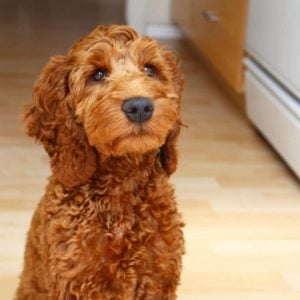 One of the most popular and common double doodles colors is golden. The golden double doodle typically has some sort lineage to the Golden Retriever and usually comes from the Goldendoodle. However, it’s not uncommon to find Labradoodle mixes that are also golden in color. Golden is a popular double doodle color because it makes your dog look like a teddy bear and many people think that this look is cute. 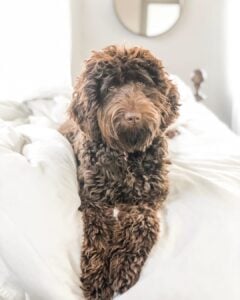 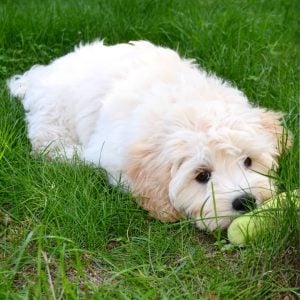 The cream double doodle is another common color for the double doodle. This color can range from an off-white to a faded gold and is very typical when breeding with a lighter colored poodle. This is probably the easiest color to breed when it comes to creating these dogs.

If you want to figure out the exact generation of your double doodle, you can contact me with the lineage and I will help you figure it out. In general, most people want a double doodle that has a significant amount of Poodle genetics because they will be more non-shedding and hypoallergenic.

Unfortunately, double doodles are still really expensive dogs and will be similar in price to a Goldendoodle or Labradoodle which is roughly $1,500 to $2,000 if you go through a reputable breeder. The demand is really high for these dogs so they are currently in short supply which causes the prices to be high. It also highly varies on which state you buy from.

However, it’s not uncommon to see double doodles sell for more than $3,000 if they are smaller sizes and multi-colored. If you’re seeking a teacup, petite, or micro double doodle then you should expect to pay more. In addition, if you’re looking for a coat color that is two or three colors then you will also pay more money.

There are several different double doodle dogs to choose from including the Goldendoodle Labradoodle Mix, double Labradoodle, Aussiedoodle Labradoodle mix, or double Aussiedoodle. This dog also comes in a variety of different sizes including the miniature, medium, and standard sizes. In addition, they have a variety of coat colors that vary depending on the parent dogs’ coat color. We hope that we helped you learn about the double doodle!