I recently met a dog owner of a 2-year old double merle Aussie Doodle who was deaf and visually impaired due to the double merle breeding practices.  This person had inherited the dog from a rescue since the previous breeder didn’t want to take care of the animal due to its special needs.  This caused me to do a ton of research on how dogs get to be a double merle.  In addition, I also explored what the probabilities and downsides of being a double merle were.

The merle colored Australian Shepherds, Great Danes, Corgis, and Border Collie’s all have a unique and signature look because they are usually multi-colored.  Many new pet owners seek out this multi-colored look, but there are a downsides and risks that dogs can be a double merle.  If you’re a breeder, keep in mind that two merle dogs should not be bred together or there is a chance of developing a dog that has the double merle gene.  Many breeders have also been reproducing this dog due to the high demand and low probability of getting a double merle.

What is a Double Merle Dog? 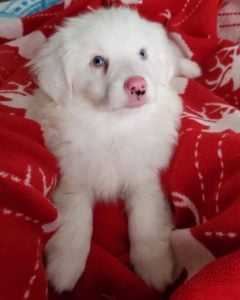 In order to understand the meaning of a double merle, it’s important to know what a merle dog is. Essentially, a merle dog is a specific coat pattern that consists of several different potential colors including blue, red, tan, white, brown, or black.  You’ll commonly see the merle pattern on Australian Shepherds, Border Collie’s, Great Dane’s, or Dachshund dogs.

In order to get the merle color, you have to dilute the normal base color of a solid coat.  For instance, for a tri-color merle Aussie, you are essentially diluting the color black to get the famous patches, patterns, and shades of color.

The problem starts to arise when a merle pattern is diluted too much.  This is what people refer to as the double merle gene.  Once the black color gets diluted too much, you start noticing white or pink colored skin on a dog (particularly Australian Shepherds).  This is essentially how double merle dogs start to become blind or deaf because the merle gene doesn’t only affect the outside coat color.  You’ll notice lots of pink and white skin around their nose, eyes, and face.  You may also notice that their eye colors turn a lighter colored blue.

How does a dog become a Double Merle? 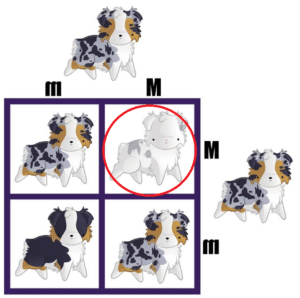 In general, you should never be breeding two merle colored dogs together.

The Downsides of a Double Merle Dog 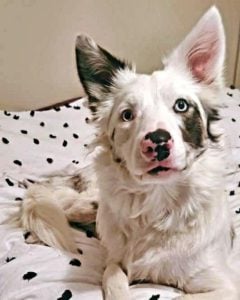 Since the merle gene not only dilutes the coat color of a specific dog, but it also dilutes other genetic traits, there are severe downsides of a double merle dog.  Some of the most common downsides are listed below:

There are certainly more downsides than deafness and blindness in a double merle, but these are the most common downsides.  Unfortunately, due to these special needs dogs, they often times are euthanized or sent to shelters where they don’t get adopted.

How do you Prevent Double Merles? 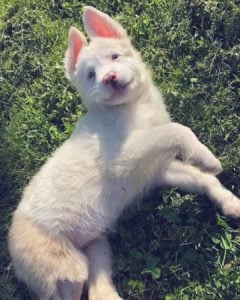 In order to prevent double merle dogs, you should not breed two merle dogs together.  For the most part, the merle gene is a dominant trait.  This is why almost all the dogs who carry a merle gene (Australian Shepherd, Border Collie, Dachshunds, Corgis, etc.) have a multi-colored coat.  Typically, it is very obvious when your dog has a merle gene.  Any two merle dogs should never be breed together.

If you’re worried about potentially breeding two merle dogs together, there is genetic testing that you can do to verify whether or not your dog has a merle gene.  If you’re looking for a genetic test for your dog, you’ll want to look if the “M allele of the PMEL gene” is present.  This is also called the M Locus test.  If you’re buying a merle dog, you should verify that your breeder has done some form of genetic testing to prevent against two dominant merle genes.

There are a couple of reasons that you see double merle dogs still.  First, the breeder simply didn’t know that a double merle dog was possible.  Second, there is a high demand for the merle color coat so many breeders will risk taking the chance of not having a double merle dog.  In this case, these are not good breeders.  If you ever see a litter of Australian Shepherds, Great Danes, or Border Collies with white coats you should definitely be wary because that is not a reputable breeder.

In addition, before purchasing a dog with merle coloring, make sure that the breeder is reputable.  You should definitely ask to see the parents verify that they are not both merle.  In addition, you can ask for the genetic testing of the parents to make sure that the M locus doesn’t appear on both dogs.  It’s important that you don’t buy a dog from a breeder who is potentially breeding double merles.

What happens to Double Merle puppies? 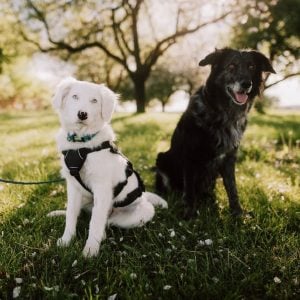 Unfortunately, if a double merle puppy isn’t killed or abandoned they will almost always end up in a shelter or rescue.  However, there are cases where shelters won’t accept special needs dogs because they almost never get adopted or rescued because they are difficult to care for.  It’s completely understandable that most people would not want to adopt a deaf and blind dog.

Some shelters and rescues dedicated to double merles:

Unfortunately, double merle dogs are often the case of negligent breeder practices because the demand is high for merle colored dogs.  For these types of dogs, they will forever live a life where they are going to be mostly blind and dead which is a series of unfortunate events.  Before you purchase a dog of merle coloring, we suggest that you inspect the parent dogs to verify that they aren’t both merle.  In addition, you should make sure that the breeder has done genetic testing to verify that the dogs aren’t both carriers of the merle gene.  It’s quite unfortunate that there are a lot of double merle dogs.