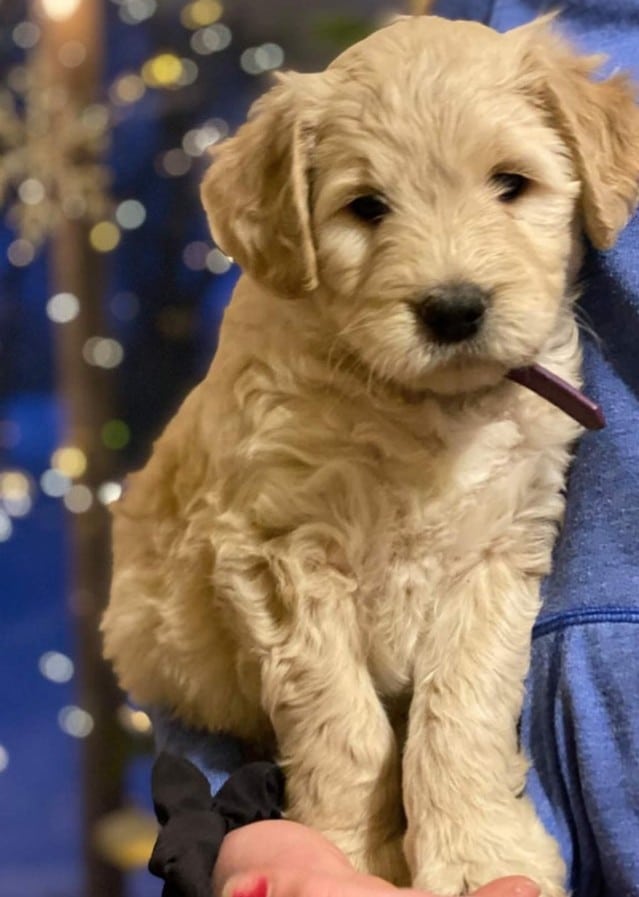 How does a Goldendoodle get a straight coat?

There is a dog gene called Cu locus (AKA Curly Coat Gene) which determines if your dog will have curly hair.  The absence of Cu locus means that you will have a straight hair Goldendoodle.  The Cu locus gene typically comes from the Standard Poodle because they have the extremely curly coat.  Cu locus prevents keratin from binding together structural components which results in a curly coat.  The means that if you have keratin from your genetic structure than your Goldendoodle will have a straight or flat coat.  You can get a DNA test to determine if your dog has the presence of this gene.

In reality, most Goldendoodles will have a wavy coat and won’t actually have straight or flat coats.  This is because they usually get a mix of the Cu Locus gene since they are a hybrid dog breed of Golden Retriever and Poodle.

Which generation of Goldendoodle has a Straight Coat?

We’ve written an extremely in-depth article of the Best Goldendoodle Generations.  This article gives all the in-depth information on what the terminology of a Goldendoodle offspring means. In general, F stands filial and means that it is a hybrid dog, the # means the generation of dog, and the B means back cross.

Since most Goldendoodle’s are back crossed bred with a Poodle in order to become more hypoallergenic and non-shedding, you don’t want any back crossed Goldendoodle’s.  In addition, this means that the higher the number of generations and the more B’s in the name the curlier the coat will be.  If you want a straight hair Goldendoodle than you want more Golden Retriever genetics.

As a quick recap, here are the most popular generations of Goldendoodle and what percent the genetics should be:

In general, try to get a Goldendoodle that is at least 50% Golden Retriever in order to maximize your chances of getting a straight coat.  Otherwise, you can try to find a breeder that back crosses Goldendoodles with Golden Retrievers (this is rare). 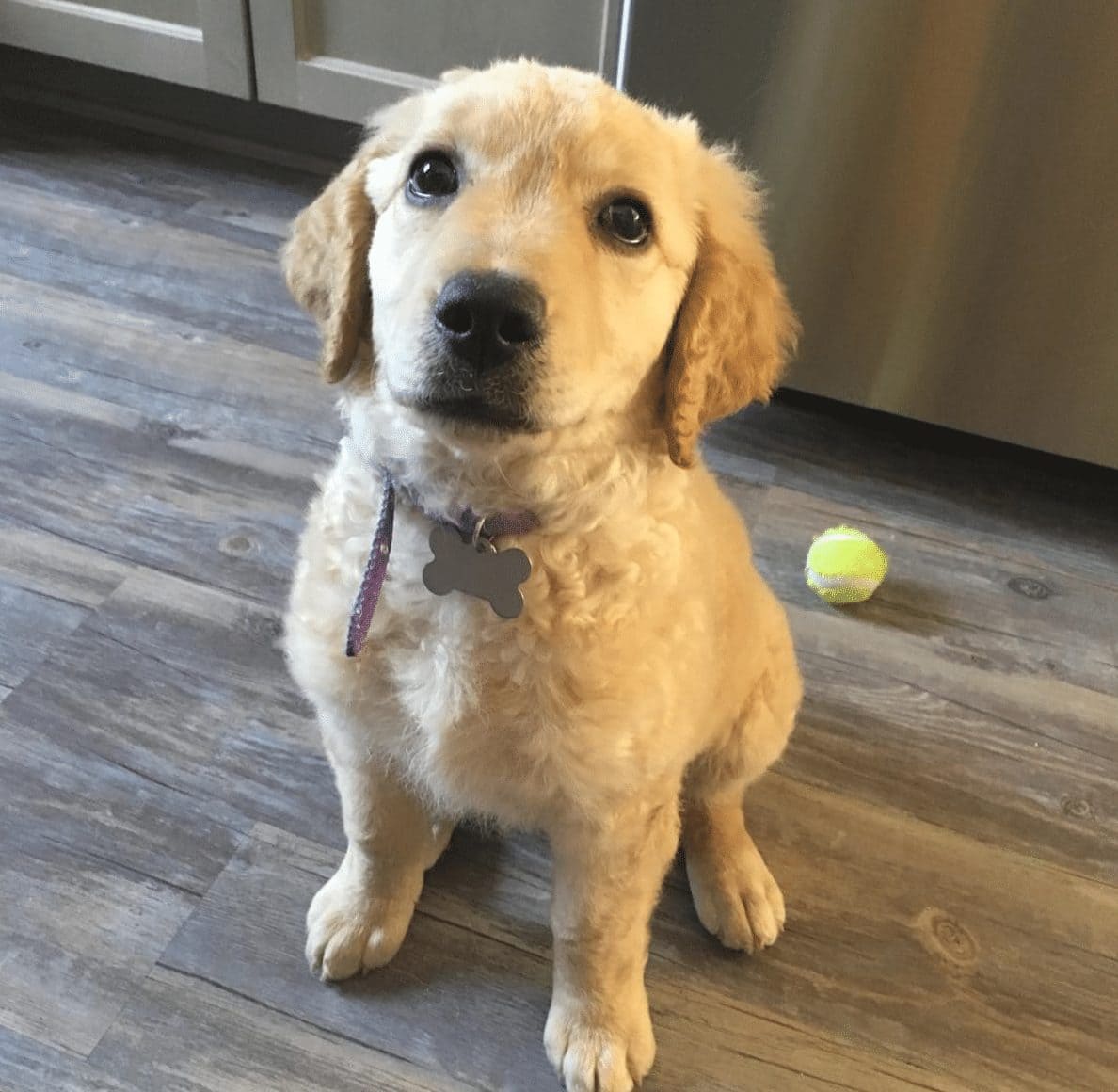 Downsides of a Flat Coat Goldendoodle

Getting a straight or flat coat Goldendoodle does have some downsides compared to a typical wavy to curly haired Goldendoodle.

Please note that curliness generally correlates to non shedding and hypoallergenic features.  This is not always the case though and is more likely to correlate to your dog’s genes.  Specifically, you’ll want to look at the Furnishing Gene and Shedding Locus Gene to get a better understanding of if your dog is non shedding and hypoallergenic.  We recommend getting a DNA test on your dog if you want to figure out their genetic structure.

Why should you get a straight coat Goldendoodle?

Genetic testing of the Cu locus gene, also known as KRT71 gene, will determine whether or your not Goldendoodle will have a straight coat, wavy coat, or curly coat.  In general, the less Cu locus gene your dog has the more straight their coat will be.  Since Goldendoodles are typically multiple generations of Golden Retriever and Standard Poodle, typically back bred with the Standard Poodle, it’s more likely that their coat will be wavy or at least have a recessive Cu Locus gene.

You can consult your veterinarian for a reliable DNA test of your dog to determine what kind of coat they will have.  In general, you can usually determine whether or not your Goldendoodle will have a straight coat or curly coat based on their puppy coat.  Typically, Goldendoodle litters will have a mix of straight coats, wavy coats, and curly coats.  Once they use their puppy hair, typically the adult hair doesn’t change structure type.

How can I tell if my Goldendoodle will have straight hair?

You can avoid them shedding too much by brushing their coats on a daily basis. But how will you know whether your Goldendoodle is going to have straight hair or not?

If your Goldendoodle puppy is other than a first-generation dog, you should look to the parents to see what their coat looks like. If the parents have straight hair, it’s likely that their offspring will have the same type of coat.

Unfortunately, there is no clear-cut way to determine whether your Goldendoodle will have straight hair or not. The only way to really find out is to wait for them to grow up and mature into their final coat types!

Can Double Doodles have straight hair?

A Double Doodle is a dog breed mixed between a Goldendoodle and a Labradoodle. As both of these dogs are already a mixed breed between other dogs and Poodles, they can both have straight, wavy, or curly coats.

This means that Double Doodles can also have straight coats, although this is much less commonly seen than Double Doodles with wavy or curly-haired coats.

Any dog that has Poodle lineage will often be much more likely to have a wavy or curly coat than a straight-haired coat. While you can get straight-haired Double Doodles, they’re uncommonly seen among owners and breeders.

Again, you won’t know for sure what type of coat type your Double Doodle has until they reach an older age. The puppies will all have coats that are too short to know whether they will be curly or not for sure.

How rare is a flat coat Goldendoodle?

Flat coats come from Retrievers who often have black or liver-colored coats. Their fur is medium-length, thick, and sleek. The hair is straight without any curls and lies flat against the dog’s body.

As Goldendoodles have a lineage of Golden Retrievers, there is the question of whether a Goldendoodle can have a flat coat or not.

When purchasing a Goldendoodle, most people want the traditional curly-coated look. For this reason, flat-coated Goldendoodles are not bred as much or seen among breeder’s portfolios.

So, they are a rarer type of Goldendoodle because they are not bred as much, but this doesn’t mean that they are necessarily rare. You might have seen a flat-coated Goldendoodle without even realizing it.

We hoped you enjoyed our Straight Hair Goldendoodle Guide.  In general, if you are targeting a get a straight hair Goldendoodle than you should focus on either a F1 Goldendoodle or F2 Goldendoodle.  When you go for your Puppy Pick out day, try to find the dog with a flatter or straight coat.  Goldendoodles tend to grow into their coats and more or less keep them into adulthood.  In general, we’ve noticed that our dog’s coat has gotten slightly more curlier over time.  Don’t worry though, you can’t go wrong with a Goldendoodle as these dogs are the cutest teddy bears with hypoallergenic and nonshedding features.  People will love your Goldendoodle no matter what!