Doodles themselves are of a new mixed breed. Their invention dates back to around the 1960s. This hasn’t given humanity much time to learn about them or create many breed members.

However, what experts know about Doodles can help you learn about the Golden Sheepadoodle. By looking at the traits of this hybrid doodle’s parents, experts can infer or predict its traits. This will help explain some terms that you will find later in the article.

Before scrolling down this guide “What is a Golden Sheepadoodle,” check out these other helpful articles: Do Sheepadoodles Shed and Sheepadoodle vs. Labradoodle Dog Breed Comparison.

How Heredity Works For Golden Sheepadoodles 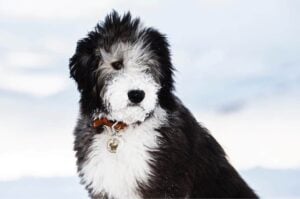 Any living creature inherits genes from its parents. These genes mix and create traits. These include eye color, hair texture, personality, and so on. However, the mere mixing of genes is not what causes certain traits to appear over others.

Instead, the building blocks of specific genes, called alleles, cause this to happen. Each gene has alleles. An offspring inherits half of its genes from one parent. It inherits the other half from the other parent.

The gene with this combination will then cause the dominant trait to appear, or it will be a part of a string of genes that lead to a trait. However, if there are two recessive alleles, their traits will activate.

Then the single gene will cause the recessive trait to appear or be a part of a string of genes that cause a trait. For instance, dominant alleles cause a curly coat in dogs. More specifically, the C² or C variant allele causes a curly coat, while two n alleles cause a straight coat.

How Dog Breeders Use Genetics For Breeding

Dog breeders use a method known as selective breeding. They take two dogs with specific traits and breed them together. Usually, if both dogs have the same characteristics, their offspring will inherit these.

For example, two black dogs are more likely to produce black puppies than a black dog and a white dog. This isn’t 100% certain, though. A puppy can inherit recessive alleles from both their parents even if the parents show dominant traits.

However, this chance becomes less likely as breeders breed multiple generations of dogs with similar traits together. All this breeding has resulted in the purebred dogs that we see today. Breeders also prefer to use these, as the traits of their offspring are easier to predict.

Humanity has been learning about dogs through centuries of breeding and scientific study. On top of humanity’s experience with selective breeding, scientists have also learned a bit about dog genetics.

They now know somewhat about which genes cause certain traits in dogs. For example, they know which traits are recessive or dominant and need multiple genes and alleles to appear.

Size of a Golden Sheepadoodle

Breeders can breed Doodles from every size of a Poodle. However, Standard Poodles are the popular parent choice for Sheepadoodles. This is because sheepdogs are enormous dogs, and it’s difficult to breed them with dogs many times smaller than them. Therefore, Sheepadoodles measure around 17 to 20 inches tall. Breeders breed Goldendoodles with all sizes of poodles.

Color and Coat Texture of a Golden Sheepadoodle

As mentioned earlier, one of two dominant traits often causes curliness in a dog’s coat. However, the genes controlling dog coat colors are a bit more complex. As shown here, different variations of multiple genes cause different black, red, brown, and cream colors to appear in the coat.

Beyond that, many color patterns (such as spots) appear on dogs. Another thing to consider is that all Doodles (Sheep and Golden) come in a wide range of colors. For example, Sheepadoodles can range from black to white and all black and all gray.

Goldendoodle’s coat colors range from white to apricot to dark black. Therefore, it’s not a great idea to expect a particular color coat on any Doodle. However, you can expect the dominant curly coat trait to appear.

The Personality of a Golden Sheepadoodle

Personality is difficult to determine in Golden Sheepadoodles. This isn’t just because multiple genes determine canine personality. It’s also because Doodles are hybrids and not purebred dogs.

It’s easier to predict personality traits in purebreds because these dogs all have similar traits. Two dogs of different breeds have unique traits. It’s uncertain which of these genes the offspring will receive.

The best thing to do is use the specific personalities of each parent to predict the personality of the offspring. Then, experts can use the average personality to predict each offspring’s personality better across all members of the two Doodle hybrids.

Goldendoodles are, on average, quiet dogs who are affectionate to all kinds of humans, even strangers and other dogs. They need to spend a lot of time outside, have high energy levels, and love to play. They are also very intelligent and can somewhat tolerate being alone.

Sheepadoodles are also, on average, quiet, affectionate to everyone, and playful. They also lean more towards having high intelligence, high energy levels, and a great need for exercise.

A significant difference is that they can tolerate indoor living much better than a Goldendoodle. They also have less tolerance for being alone. As a Goldendoodle Sheepadoodle mix, the Golden Sheepadoodle will probably take the most similar traits between both parents.

Therefore, a member of the mixed breed will at least likely be quiet, playful, intelligent, and affectionate to all. There’s one last thing to consider about personality, though.

Owners can control at least part of a dog’s personality by being raised. An owner should treat a dog with love and socialize it properly. This will best help their dog to have a preferable personality.

Related: Why Choose a Sheepadoodle For Your Next Pet? 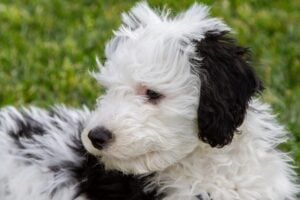 Experts don’t understand the genetic causes of most canine diseases just yet. However, just as with personality and appearance, a puppy will probably have the traits of similar parents. Therefore, reputable dog breeders will do what they can to breed these diseases.

There are also different health certifications that they can get for the dogs they breed. However, they can still appear even when parents don’t appear to have them. This happens even more often in hybrid breeds.

A Golden Sheepadoodle can inherit any of these health issues. You can get a puppy checked with a reputable vet for some of them after they’re born. Most veterinarians, however, cannot determine certain diseases until the animal is much older.

One positive health trait of hybrid dogs is that they are healthier than their purebred cousins. Similar traits between purebreds can apply to diseases as well. Thus, it’s less likely that the same conditions will show up in the offspring of two different purebred dogs in hybrids.

Conclusion For “What is a Golden Sheepadoodle”

Goldendoodles and Sheepadoodles are popular hybrids for a reason. They have far more good traits than bad ones. These are what make them wonderful pets. These traits they share are also similar to each other, mainly because they share a dog breed between them.

For this reason, as a Sheepadoodle and Goldendoodle mix, each Golden Sheepadoodle is more likely to inherit each parent’s beneficial traits. That said, future owners should know that they can have downsides.

If you find this guide, “What is a Golden Sheepadoodle,” helpful, feel free to check out our breeder recommendations:

With Golden Sheepadoodles out of the way, you can learn more about the breed by watching “Sheepadoodle – Top 10 Pros and Cons” down below: