Before scrolling down our list of German Shepherd rescues in Arizona, here’s something you should know about the breed. The German Shepherd Dog is one of the most loved dogs around the world. German Shepherds always make the list of top dogs to own. There is no surprise for this since German Shepherds are loyal, confident, display a large amount of courage, their willing to learn, and the fact that they adapt to pretty much any situation, be it whether or new accommodations.

People know German Shepherds as police dogs, military dogs, or even service dogs to lead the blind or other people with disabilities. German Shepherds are good working dogs since they are easy to train and follow instructions well. German Shepherds date back to the late 1800s. German Shepherd dogs were originally responsible for heard sheep and also kept predators away. The dog was created to be “unmatched” as a herding dog. Post-World War I, the popularity of the dog skyrocketed. The breed got recognition since soldiers spoke highly of the dogs.

After World War one and the increasing tension with the world and Germany before World War II, the dog had a different name. People did not want the breed to be associated with anti-Semitic Germany. There are various names used around the world for this breed of dog. Alsatian, which this name is still widely used around the globe, GSD, Alsatian wolf dog, Berger Allemand. And Deutscher Schäferhund. Five different types of German Shepherds are available around the world today. Shepherd East European Shepherd, Shiloh Shepherd, White Shepherd, King Shepherd, and White Swiss Shepherd.

This is one of the most popular dog breeds, so you will not have a hard time finding a good shelter to adopt one at.

Here are just a couple of the German Shepherd Rescues available to you in Arizona. These are reputable and well-known locations. 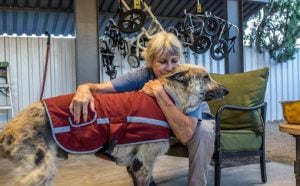 They will then reach out to you to set up an appointment to view the dogs you want. If adopting from out of state, or even in-state but not locally, the entire family (including other puppies) needs to come in for a meet and greet. If you live out of state Saving Paws Rescue also will require a home visit after the dog has been in the home for a while (should you decide to adopt and take one home). The adoption fee ranges from $250 to $500. The typical price is $350 for puppies and $500 for adults. The adoption fee is significantly less than what it would cost for veterinary services. 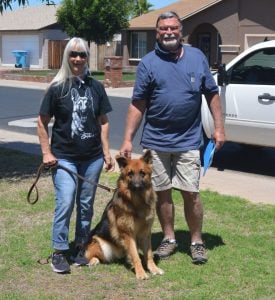 It would be best to have a secured fenced yard, and SW GSD Rescue requires that the dog live inside. After completing an application, you will have a phone interview and a home visit before showing any dogs. You will also have a two-week trial period with your dog, and the dog can be returned minus any administrative fees. The adoption fees for the dogs at Southwest German Shepherd Rescue can vary from $75 to $450. Some of the more senior dogs might not even have an adoption fee but a small “donation.” 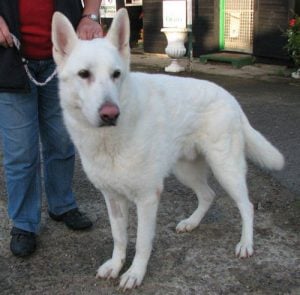 You will have to complete an application. The adoption fees are White German Shepherd Rescue vary from as little as $150 to $400. The way that White German Shepherd Rescue prices their dogs vary by the dog’s age, training level, and the different types of medical conditions that the dog might have. Adoption fees are charges because this shelter, along with most others, is fully funded by donations and volunteers. So, your adoption fee goes toward caring for your pet and other pets that will pass through the shelter until they find their forever home.

Why Are German Shepherds Put Up For Adoption in Arizona? 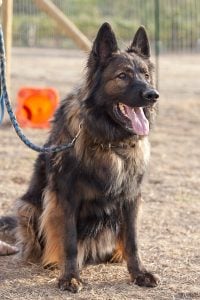 You’re probably thinking that there are many negatives about owning a German Shepherd but don’t worry, there is so much to love about these puppies.

Conclusion For The “Best German Shepherd Rescues in Arizona” 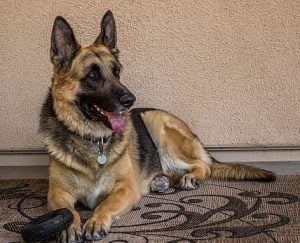 Before you adopt any pet, there are several things that you need to consider. Do you have the financial and mental means to keep up with a pet? Owning a pet of any kind can be very expensive, so keep in mind all the potential costs that can come with this. This can be veterinary expenses, toys, boarding, pet fees, etc. If you have gone over all the potential issues and still feel you are ready, reach out to your local rescue, and they can match you with your new best friend.

For more articles with mentions of the German Shepherd, you can check out:

If this guide is helpful, you can watch “5 Things To Know Before Getting a German Shepherd” from Lucy Lane the Queen of Balmain to learn more: