However, various factors dictate its price. The puppy’s cost depends on whether it’s purebred, where you’re from, and the breeder. It’s vital to know how much a German Shepherd puppy will cost before contacting a breeder. You can expect to find the cost implication of getting this breed, as well as why certain breeders charge more for German Shepherd puppies.

The only difference between older versus younger German Shepherds is that they’ll already have habits developed. The main reason for the price difference is because many people prefer raising puppies. If you’re looking for a cheaper option, you can get a GSD puppy from a shelter. Thankfully, there are numerous shelters with gooey-eyed German Shepherds in search of a loving home.

What Influences the Cost of a German Shepherd? 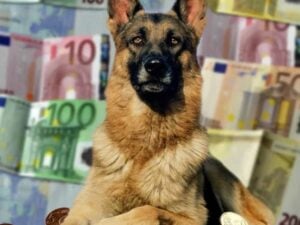 The actual cost of a German Shepherd puppy varies with a lot of factors. These factors include location, parentage, breeder, and life purpose. We say purpose because German Shepherds are brilliant and hardworking dogs. Their skills and readiness to learn to make it easy for them to specialize in diverse areas. It isn’t much of a surprise to know that they’re higher in price than other dogs.

Let’s take it down a notch – when we say purpose, we’re simply referring to the role you expect your companion to fill. The truth is that many German Shepherd puppies are not bought solely to live in a family-like environment. Often, they have another role waiting for them after they’re purchased. For instance, you’ll spend less on getting an average German Shepherd dog versus a police dog. Generally, they’ll cost between $500 to $1,500. German Shepherd puppies bred from show-quality parents, however, will cost much more. 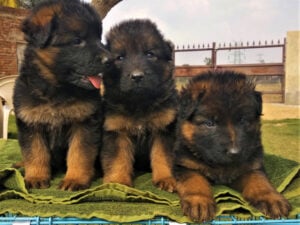 How Much Does a Purebred German Shepherd Cost?

Getting a purebred German Shepherd puppy from a reputable breed can be a bit pricey, but it’s a more thoughtful decision because you’re potentially avoiding puppy mills. To prevent unethical practices, purchasing from a trustworthy source will keep your mind at ease because you know that your puppy grew up healthy. Purebred German Shepherds have genetic and phenotypic traits that they inherit from their parents and ancestors.

How Much Do Czech German Shepherd Cost?

Czech German Shepherds are another one to keep in mind if you’re shopping. They tend to have a wolf-like appearance but don’t let that fool you – they’re great family dogs. The Czech German Shepherd is a highly intelligent, strong, calm, and fun breed to be raise. They’re strong enough to be used as military or police dogs.

If you want to get a great Czech German Shepherd, you should be expecting to pay extra. They cost more than the regular German Shepherd puppy because they’re both bred for different purposes. Since you’ll be spending a great deal of money getting the puppy, you should see the breeder in person and do your due diligence.

How Much Does a Black German Shepherd Cost?

However, black and grey-born German Shepherds can change colors as they reach adulthood. German Shepherd puppies born black retain their black color, which will eventually fade. If you want to adopt a black-colored German Shepherd, we’d advise you to get an adult because you’ll know that’s the color it’ll stick with and are less likely to change colors.

Factors to Consider Before Purchasing a German Shepherd 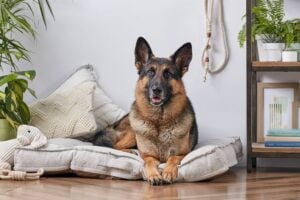 Bringing home a German Shepherd is a life-changing decision.  Besides being prepared to love and care for them, there are profound cost implications and additional responsibilities. These responsibilities include:

Your German Shepherd’s health and lifespan depend on many of these factors. You’ll also need to get your companion vaccinated, and that can boost up the cost of raising one quite a bit.

German Shepherds, like all dogs, need a balanced diet rich in protein and healthy fats. To match the energy of your German Shepherd puppy, you’ll have to take care of it and feed it with the proper dietary needs. You want to provide your companion with a healthy amount of high-energy food. It would be best if you also broke their meals in-between time.

For instance, feed them between three to four times per day. While it sounds painful for your wallet, try to diversify its food source. Nutritious and high-energy dog food can cost as much as $63 per bag. Multiply that, and it could cost as much as $1,000 in less than a year. Unfortunately, other factors include giving your companion dog treats, which you’ll need for training, and having a happy companion.

Asides from feeding your German Shepherd dog food and treats, there’s another task, and it’s training your companion. German Shepherd puppies are best when taught at a young age. You should be consistent and shape its habits early on because it hasn’t developed any good nor bad habits yet. You can try using food or treats when your companion shows any good habits. Always reward it for good behaviors and avoid all cruel punishments. You can switch from food to secondary reinforcements like a pat on the head and the occasional treat as time goes on.

The most important thing of all is your German Shepherd’s health. Exercising and feeding are some of the few factors for your German Shepherd to live a long and healthy life. With that aside, you’ll also need to schedule veterinary appointments for shots and annual examinations. The exams and shots could cost as much as $100 annually, which is something you’ll also need to consider. 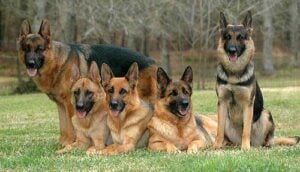 Purchasing a German Shepherd puppy is a huge investment, which means that you’ll need relevant information to make a better decision. Fortunately, we’ve done our research for you and gathered all of the data into one place to help you make a better and informed decision. It’s best to get your German Shepherd puppy from a reputable breeder and do your research as well. Well-known breeders always have documents that show proof of the dogs’ bloodline and health information. The extra mile they go for you might come at a slight additional cost, but it’s all worth it long-term.

Conclusion For “How Much is a German Shepherd”

Introducing a German Shepherd into your home is a huge decision and investment. A German Shepherd’s upfront cost depends on various factors such as the color, purpose for breeding, location, and parent breeds. On average, German Shepherd puppies could cost anywhere between $500 to $1,500. However, they’re well worth the cost because the memories are something you’ll cherish for the rest of your life.

For more content related to “How Much is a German Shepherd,” check out:

Before making any purchasing decision, watch “Things To Know Before Getting a German Shepherd” down below: