Traits of an English Labradoodle 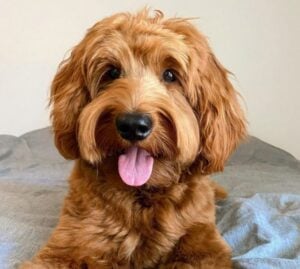 Designing a hybrid dog such as an English Labradoodle is not an exact science. With each dog, even purebreds, having traits of their own, the offspring can differ significantly from one another. Each litter will have something unique no other puppy will have from size to coat appearance and color.

Females will be slightly smaller than their male counterparts, though there’s never a guarantee of how big the dog will get.

Genes play a significant role in the appearance of each puppy in the litter. Since the parents are purebred, puppies will inherit the parents’ looks, though the Poodle gene might dominate. Overall, they look like large Poodles with some Labrador Retriever traits. There’s a wide variety of colors to an English Labradoodle’s coat, such as silver, chocolate, apricot, caramel, cream, chalk, black, red, gold, and parchment.

Coats can also have parti-colors such as phantom, sable, brindles, and patched. The coat will be different for each puppy though it will reach 4 to 6 inches. The typical textures of an English Labradoodle will vary greatly depending on which genes dominate.

No one English Labradoodle is the same as the other. Even with the same parents, every litter can possess a unique look, from the color to the texture. 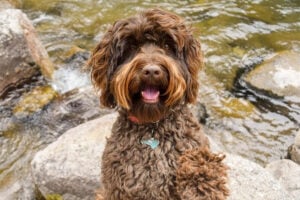 Intelligent dogs, English Labradoodles are lovely family pets, so long as they receive the proper training. Though they’re considered gentle and loving, English Labradoodle likes to show off their excitement—they love jumping and playing. Training is a must for these dogs even if they aren’t considered aggressive—early socialization helps immensely.

The more socialization provided, the higher the likelihood the puppy will grow to become a well-rounded dog. Choosing the right puppy will go a long way in finding the right companion for English Labradoodle temperament. Getting a feel for the entire litter will help find the puppy whose character is neither too aggressive nor too passive.

Considered generally healthy, English Labradoodles are prone to certain health conditions, much like any other dog.

Though English Labradoodles come with their own set of health issues, that doesn’t mean it’s time to discount the dogs. On the contrary, with the right amount of care and diligence, these dogs can live long, happy lives.

Caring for an English Labradoodle includes regular veterinarian visits and careful grooming. Yearly shots and check-ups are essential for the dog’s well-being—they give the vet time to catch anything that might start happening. Part of their care requires regular grooming and exercise. English Labradoodles, especially the larger ones, are not recommended for individuals living in apartments for the sheer amount of activity they need.

They require at least half an hour to an hour of exercise every day, which is best accomplished through a fenced yard. They’re great jogging companions—they’re best when off the leash. Crate training is also an integral part of owning an English Labradoodle. Curious by nature and in need of lots of exercise, they’re likely to get into something they shouldn’t when left unsupervised.

Crate training from the get-go will give the dog a place to feel safe, secure, and keep them out of mischief. Grooming and providing the right nutrition will go hand-in-hand in maintaining the overall health of an English Labradoodle. With as many food options as there are on the market, a veterinarian can help guide an owner through the best choice for the puppy so they grow healthy and strong.

Proper nutrition also helps keep the coat shiny and strong, preventing hair loss, dandruff, and other skin conditions. So whether the dog sheds or not, an English Labradoodle should get a good brushing at least once a week, with a proper groom at least once every month to a month and a half.

Conclusion For “What is an English Labradoodle” 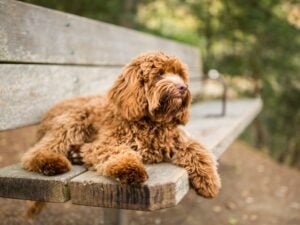 English Labradoodles—a cross of a purebred Labrador Retriever and Poodle—make the most wonderful family pets. With their loving and loyal temperament, all they require is a loving hand and some training to become a family member. Popular among many families for their hypoallergenic properties, their coats make them unique. These one-of-a-kind dogs become family companions in no time. All they require is attention, training, and lots of room to use all that excess energy.

For more guides with mentions of the Labradoodle dog breed, you can check out:

To learn more about the Labradoodle breed, watch “Labradoodle – Top 10 Facts” from Dogs Wiz down below: