Do Aussiedoodles have blue eyes? First, here’s what you need to know about the Aussiedoodle. The Aussiedoodle is a cross-breed combining the Poodle and Australian Shepherd. It’s one of the famous “designer breeds” that many pet owners now favor.

Mixed breed dogs differ from purebred canines because it’s difficult to predict their exact characteristics. For example, one Aussiedoodle puppy might take more after its Poodle parent while its littermate has more characteristics than the Australian Shepherd.

As well as several coat colors, Aussiedoodles also have a variety of possible eye colors. While Aussiedoodle blue eyes are uncommon, they can be found with certain colored coats.

Before scrolling down this guide, “Do Aussiedoodles Have Blue Eyes,” you can check out these other Aussiedoodle guides from our team at We Love Doodles: Aussiedoodle Puppies For Sale and Best Aussiedoodle Generations.

Can Aussiedoodles Have Blue Eyes?

You may even see Aussies with orange or yellow eyes. While Aussiedoodles of any coat color may have blue eyes, this eye color is especially common with merle-coated dogs.

What is a Blue Merle Aussiedoodle?

Like in Australian Shepherds, blue eyes in Aussiedoodles often appear with a merle coat. Blue eyes are genetically linked to the merle coat pattern. A merle coat includes mottling of different intensities. Some areas with color might have dense color, while others are more transparent.

Can Non-Merle Aussiedoodles Have Blue Eyes?

Is It Common for Aussies To Have Blue Eyes?

Do Poodles Have Blue Eyes?

Poodles can have blue eyes. This is good news if you want an Aussiedoodle to have blue eyes, as the Poodle parent also needs to have that eye color.

However, the American Kennel Club (AKC) and Poodle Club of America don’t recognize blue eyes as acceptable in show Poodles. Instead, dark brown eyes are considered most desirable and part of the breed standard.

Do Australian Shepherds Have Blue Eyes? 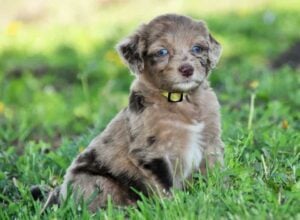 Like many other breeds, Aussiedoodle puppies are born with blue eyes. However, in many cases, those eyes will darken as they gain more pigment during development. So, you cannot assume that a blue-eyed Aussiedoodle puppy will retain that eye color. 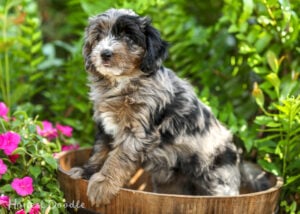 It’s not always a “true” or “pure” type of blue, but it will usually be visibly blue. If your Aussiedoodle puppy’s eye color changes, the process will start when they’re around one month old. The puppy should have its adult eye color by the time it’s around four months old. 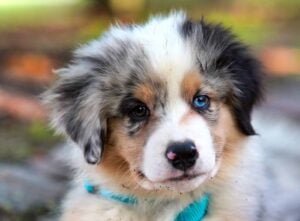 How to Find an Aussiedoodle With Blue Eyes

There’s a quite reliable way that breeders can get Aussiedoodles with blue eyes. They can cross a Blue Merle Australian Shepherd with a white Poodle to achieve this. It doesn’t always work, though. In other words, the puppies might not have blue eyes (or their blue eyes might change later). If you want an Aussiedoodle with blue eyes, you should put your name on a breeder’s waiting list.

First, ask them to let you know if they have a puppy with blue eyes. Then, you can discuss the matter with them and determine whether the puppy’s eyes are likely to change color later on. While you might want an Aussiedoodle with blue eyes, you should know that this eye color can come with health problems.

Many dog owners love blue eyes and seek them in their pets. But you should know that certain health problems can be attached to blue eyes in canines. Dogs with blue eyes are at greater risk of hearing and sight problems. A hearing problem that may come along with blue eyes is cochleosaccular deafness.

This kind of deafness is often present in dogs with Merle coats and piebald coats. It’s also seen in dogs with white coats. If a dog has cochleosaccular deafness, the dog may be deaf in just one ear, or they may be deaf in both ears. This kind of deafness is connected to blue eyes because it’s linked to a lack of pigment. Blue eyes are caused when there isn’t enough pigment for darker eyes.

Let’s look at the answers to some frequently asked questions.

What dog breeds have blue eyes?

What is the Rarest Color of Aussiedoodle?

What is the Temperament of an Aussiedoodle?

However, the Australian Shepherd is a working and herding breed, so it’s especially lively. Don’t get an Aussiedoodle if you don’t have time to devote much of the day to give your dog exercise and interaction. Aussiedoodles will feel the need to have a “job” and will be eager to please.

This is a highly playful and high-energy dog. Their intelligence means they are easy to train, but only if you do it correctly. This is such a brainy dog. It may even try to trick you! But for the most part, Aussiedoodles are sweet-tempered and friendly.

Are Aussiedoodles Easy to Groom?

The exact grooming your Aussiedoodle needs depends on whether they take more after their Poodle or Australian Shepherd parent.

If your Aussiedoodle has more of an Australian Shepherd-type coat, it will have quite a bit of shedding. When you brush your dog, focus the most on taking out loose hairs in the undercoat.

If your dog has more of a Poodle-type coat, then you’ll be pleased by how little your Aussiedoodle sheds. However, you’ll still have to do plenty of brushing, as curly hair gets matted quickly.

Conclusion For “Do Aussiedoodles Have Blue Eyes?”

As we’ve seen here, Aussiedoodles have a variety of eye colors. Some dogs of this designer breed have blue eyes as adults, but others don’t. Even if an Aussiedoodle puppy has blue eyes when born, its eye color may change as it matures.

While Aussiedoodle’s blue eyes are beautiful, be aware a dog with this eye color has more of a risk of deafness. Overall, you shouldn’t choose a puppy based on just one characteristic. Instead, you should research and find all the other characteristics you want.

For more dog guides on eyes, you can check out:

You can see a blue-eyed Aussiedoodle in action by watching “Austin the Apricot Aussiedoodle with Blue Eyes” down below: