Finding the best Rhodesian Ridgeback breeders in California can sometimes be challenging. However, our team at WeLoveDoodles got you covered. Before moving on, here’s what you need to know about this dog breed. The Rhodesian Ridgeback is an ‘all weather’ tough dog. The ridgeback is famed for its ridge and stripes of smooth backward-growing hair.

The dogs were initially bred in Africa, where they were used for tracking and hunting. Rhodesian ridgebacks have evolved over the decades to become adorable family dogs and pets. They are innately independent-minded and have a strong zeal to hunt their food. The dogs are also suited for California’s rugged terrain. 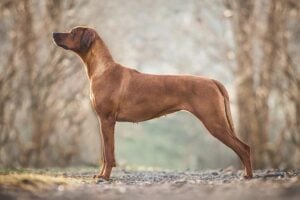 Get started in advance with your Rhodesian Ridgeback companion. Take a look at our recommendations: Best Device to Stop Dog Barking and Best Outdoor Dog Bed. 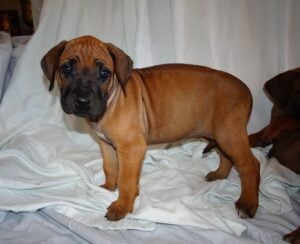 Occasionally, males are imported from abroad for a breeding process to ensure that only the best litters are produced. For instance, in 2013, the breeder imported male dogs from South Africa to boost the genetic pool of their dogs. The Rhodesian ridgebacks are bred for agility, beauty, and strength. If you need a breeder where you are sure to get well-trained Rhodesian ridgeback puppies, you should check them out. You can find photos of their beautiful litter on their website. 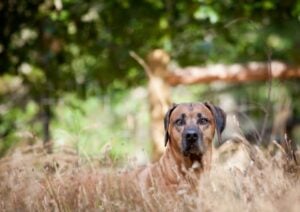 Situated in Southern California, Kohana Ridgebacks is a breeder owned by the Cradle family. Rickey and Jenny Cradle own and run the kennel, living in Orange County. The duo has served on the board of Rhodesian Ridgeback associations in different counties in California. Rickey was on the San Diego Rhodesian ridgeback club board while Jenny was in Orange County.

The breeder is strongly committed to the breeding and lures coursing of Ridgebacks. The kennel only breeds healthy dogs with a good bloodline. At Kohana Ridgebacks, the incredible characteristics of the breed are enhanced through breeding. They produce breeds adaptive to sports, biddability, and other dispositions.

They also have championship dogs with excellent conformation and wonderful temperaments. The Rhodesian ridgebacks at the breeder are well-socialized and relate easily with other dogs. The breeder also showcases all its puppies on its website and gives regular updates on them—indeed, the best breeder for any person looking to adopt ridgebacks in southern California.

If your goal is to adopt a high-quality bred Rhodesian ridgeback, RiverCity Rhodesian Ridgebacks is your breeder. The farm was founded in 1984 by Troy Abney. Her mother, Sandra, also joined her in the breeder. Troy developed a fondness for Rhodesian ridgebacks after owning one herself when she was eight years old. The incredible characteristics her dogs displayed made her open a ridgeback breeder.

The breeder produces ridgebacks with sound health and impeccable temperament. They also train dogs to be agile and profitable.RiverCity Rhodesian Ridgebacks is a member of different Rhodesian ridgeback clubs in California, including RRCUS and OCRRC. Breeding only occurs when their ridgebacks have passed all the necessary health tests. If you’re looking to get the healthiest Rhodesian ridgeback puppy in CA, you should consider RiverCity. They are always ready to respond to you and answer any questions.

If your ultimate pet goal is to find a dog with the right qualities, Skydancer Rhodesian ridgebacks are the breeder for you. The ranch is located in Santa Barbara. The breeder has a meticulous standard of following the German tradition of breeding ridgebacks. There are specific characteristics they seek when it comes to breeding: appearance, obedience, intelligence, and beauty. They also breed dogs that are safe and family-friendly.

The breeder commits to providing the best meals to its puppies right to adulthood. The meals they serve their ridgebacks are nutritious and help them develop intelligence. The environment is also conducive for many dogs at the breeder. They take great care in raising the most adorable ridgebacks you will find anywhere. The adoption process is also hitch-free and professional, with staff ready to answer your questions every step.

LamardePerro was founded in 1954 by Margaret Lowthian Cook. They incredibly built the future of the Rhodesian ridgeback in the United States. The breeder was one of the first in the entire country to begin ridgeback breeding. The founder initially bred Weimaraners but later divested them into the Rhodesian Ridgeback breeding. She picked an interest in the breed while on a trip to South Africa.

She went on to rank among the most renowned ridgeback breeders in California and beyond. Many ridgeback breeders in the US trace the origin of their dogs back to her ranch. If you want to buy your puppies at a farm with a rich history of ridgebacks, check them out. The ranch is now run by her children, who have strived to maintain the ranch’s legacy. The breeder still produces agile and obedient Ridgebacks. 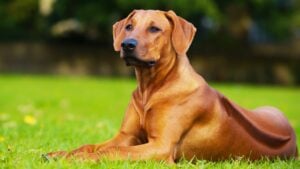 The breeder raises the puppies on the ranch as though they are members of their own family. The litters live in the main bedroom. Yes, you read that right! They get first-class treatment at this breeder, and that is what those adorable puppies deserve to get. The dogs are bred following Natural Rearing edicts.

Their front dewclaws are not removed as the breeder believes this will traumatize them. You will also not find kennels or cages at this breeder. Like we said earlier, they breed puppies like family. When you adopt a puppy at the breeder, you can rest assured of their temperament and behavior.

They are trained to have great humor and often display innate abilities. Afrikka Rhodesian Ridgebacks are members of the Rhodesian Ridgeback Club of the United States. They adhere to their principles and ethics. The breeder comes highly recommended, especially if you live around northern California or southern Nevada. Pictures of some of their puppies can be found on their websites and social media pages.

Conclusion For The “Best Rhodesian Ridgeback Breeders in California” 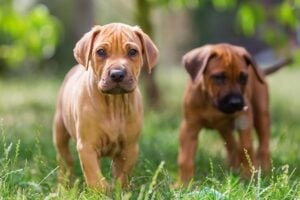 Rhodesian Ridgebacks are indeed a pet you want to have if you are a fan of agile pets. They are also excellent hunting dogs and could come in handy if you like hunting for game. However, they are no pushovers, and it’s pertinent to get a breeder that sells the best.

There are many quack breeding puppy mills out there, and you may want to avoid adopting an improperly bred or trained ridgeback. Make inquiries about a mill before patronizing them, and look for potential red flags. We have made the job more straightforward with this vetted breeder list. We wish you the very best in your adoption journey.

For more dog breed recommendations in California, you can check out:

To learn more about this dog breed, watch “Rhodesian Ridgeback Breed Review” from Dogumentary TV down below: