In this guide, our team did our due diligence to find you the most dangerous dog breed in the world. Annually, about five million Americans get bitten by pet dogs. Most dog bite victims require medical intervention. Dogs may become violent due to abuse, neglect, or a lack of socialization. Such dogs will be suspicious of strangers and attack when threatened. Some breeds are natural protectors and guardians. However, this defensive tendency can cause a dog to attack without provocation. Which types of canines should you watch out for? Let us take a closer look at the most dangerous dog breeds.

Before scrolling down this list of the most dangerous dog breeds in the world, check out our other dog breeds that might interest you: Best Barn Dog Breeds For Farms and Outdoors and Dog Breeds That Can Be Left Alone For 8 Hours.

Most Dangerous Dog Breeds in the World 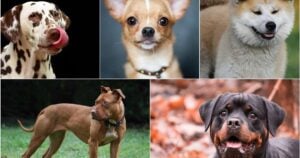 The Rottweiler is a breed that is known for its barrel-chested and muscular build. An adult Rottie can weigh up to 130 pounds. This working dog was initially bred to herd livestock. Today, people adopt Rottweilers as house pets. Rottweilers are passive most of the time, but they do not respond well to forceful petting, loud noises, or yelling. These robust dogs have been known to attack people approaching from behind, including children. This defensive reflex leads to severe injuries since Rottie’s bite is quite powerful. Its jaws can exert a bite force equivalent to over 320 pounds. Unfortunately, this has also given Rottweilers a reputation for savagery.

Typically, German Shepherds are friendly, intelligent, vigilant, and brave dogs. These qualities make them excellent family pets and make them useful for the police and military. A mature German Shepherd can weigh up to 100 pounds. This breed is not usually perceived to be violent. However, a German Shepherd can be highly protective of its family members. If this dog is not appropriately trained, it can attack friendly strangers who enter its territory.

The Gull Dong is a hybrid parented by a Bully Kutta and Gull Terrier. Originally from Pakistan, these massive dogs can weigh up to 140 pounds. Since a Gull Dong was bred to be a fighting dog, it is naturally more aggressive and difficult to control. Gull Dongs are not a good option for novice pet owners because they require a firm hand. They are also not ideal for families with children. However, if raised correctly, a Gull Dong can be fiercely protective and loyal. If you wish to adopt a Gull Dong, ensure that you get it trained by a professional from an early age.

It can be easy to get intimidated by a Bullmastiff, owing to its large stature and aggressive nature. Adult Bullmastiffs can reach up to 130 pounds, which is why they are commonly employed for security. Its highly temperamental behavior and powerful bite make it a canine to watch out for. Bullmastiffs don’t need as much exercise as other working canines. If you want to keep one as a family pet, you need to train it well to learn to follow instructions. It requires patience, consistency, and positive reassurance. If trained harshly, the Bullmastiff can become aggressive and attack people.

A Doberman Pinscher is potentially dangerous due to its large size, muscular frame, erect body posture, and naturally aggressive nature. However, this does not imply that a Doberman Pinscher cannot be a good family dog. If trained well and raised in the right environment, no dog will be friendly, loyal, and intelligent as a Doberman Pinscher. These personal protection dogs rarely attack their owners. If your Doberman Pinscher has been previously abused or trained poorly, then there is a high probability that it will be highly aggressive. It will not easily reciprocate care and affection.

Traditionally, Boxers were trained as hunting, guard, and attack dogs. They were initially a gamekeeper’s dog and bred to defend against predators. You can easily spot them because of their square heads, imposing build, and sleek coats. They are included in this list because of their powerful bite and large size. For those who want to adopt a Boxer as a pet, make sure that you provide it with the right environment and training. This ensures your family has an intelligent, sweet, and playful companion.

The Saint Bernard breed originates from the Italian and Swiss Alps. It is famous for its ability to rescue lost or stranded hikers in the snowy terrain. These dogs are some of the most significant pets around. An adult Saint Bernard has a weight ranging between 140 and 260 pounds. Some Saint Bernards may even exceed 300 pounds.

This breed is friendly and protective, but it can also be quite territorial. Saint Bernards can be highly aggressive when threatened. Their bites can have serious consequences, from brain injury to death. To ensure that your Saint Bernard does not display aggressive or territorial characteristics, ensure that it is socialized toward people and other dogs.

As the name suggests, a Wolfdog is the offspring of a wolf and a domesticated dog. Thanks to their wild parents, these wolf-dog hybrids are natural hunters with a keen survival instinct. Even though they are not usually killers, it is not unusual for a Wolfdog to attack small animals unprovoked. As a result, even after numerous attempts at breeding and domestication, it has been difficult for people to adopt Wolfdogs as family pets.

They do not like being petted and consider any form of physical affection as a sign of aggression. Moreover, Wolfdogs are known to be unpredictable and fidgety. Due to the problems faced in breeding Wolfdogs, many states in the United States have made it illegal to own it as a pet. Those who wish to cage Wolfdogs require special permits to do so.

Last on our list of the most dangerous dog breeds in the world is the Akita. The Akita originated in the snowy mountains of Japan. It is considered to be a dominant, independent, and sturdy breed. An adult Akita has a muscular frame and can weigh up to 100 pounds. These cold-weather dogs have a double-coat reminiscent of Huskies.  With proper training and care, the Akita can be an affectionate and obedient dog. Otherwise, it can become awkward and even defensive in the presence of strangers. If neglected or abused, the Akita can become violent and defensive.

Why Are These Dog Breeds Considered Dangerous? 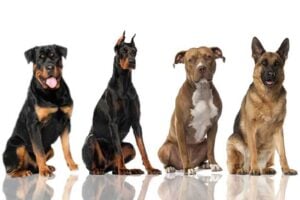 This line-up is based on dog-related injuries in the United States documented by breed. Dangerous breeds are identified according to the:

It’s no surprise that larger dogs make up the majority of this list. These breeds are more dangerous because of their sheer size. It’s harder to defend yourself against an attacker that can easily reach your throat and push you to the ground. These imposing dogs also cause more damage because of their powerful jaws. An attack can have life-altering consequences, including facial injury, fractures, and brain damage. A dog’s bite can break bones and tear tissue in seconds. These were the top factors present during most documented attacks by dogs:

However, keep in mind that 80% of victims could not identify the breed of the dog that attacked them.

Why Are Some Dogs More Aggressive Than Others? 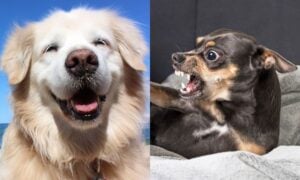 One of the most common questions that dog lovers have is why some dogs are more aggressive than others. Several factors influence a dog’s behavior, including genetic predisposition, environmental factors, and size.

Can You Tame an Aggressive Dog? 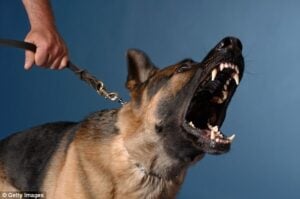 Aggressive behaviors in dogs are classified as territorial, dominant, fearful, and predatorial. These behaviors can manifest for various reasons, including abuse, neglect, health problems, a highly aggressive owner, harsh punishments, or lack of socialization with people and other dogs. To ensure that your pet doesn’t become violent, here are some tips that you can follow.

Conclusion For The “Most Dangerous Dog Breeds in the World”

Dogs have been bred to be protectors, hunters, and fighters. These breeds are incredibly loyal, protective, and fearless. Unfortunately, these traits can also be viewed as territorial, aggressive, and savage when taken to extremes. When this happens, a dog breed can pose a severe threat to life and limb. However, it’s still possible to adopt these seemingly dangerous dog breeds as family pets. You can counteract these traits with the proper training, socialization, and positive reinforcement. You need to put in the effort so that your dog will turn out to be a sweet, gentle, and playful animal.

For more similar dog guides, you can check out:

You can learn more about this topic by watching “10 Most Dangerous Dog Breeds in the World” from TheRichest down below: