Here’s what you need to know if you’re searching for German Shepherd rescues in Pennsylvania. German Shepherd originated in Germany dates back to the late 1800s. German Sheppard’s are known as a few different things GSD, Alsatian, Deutscher Schäferhund,and Berger Allemand.

We all know these mid to large-sized puppies as police or military dogs, but they are much more than that. The German Shepherd is a good working dog since they are easy to train and follows instructions well.

German Shepherd was created to herd sheep and were companions to the German Farmers. Only a select amount of dog breeds were deemed fit to herd sheep. However, after World War I, the popularity of the breed skyrocketed.

The name “German” was frowned upon by many countries due to the anti-Semitic association. The breed is still referred to as Alsatian wolf-dog to remove any Hitler Germany association. The name Alsatian was removed in the year 2010.

If you fall in love with this type of dog and wonder where you can adopt one, you have plenty of options.

German ShepherdRescue of SE Pennsylvania is a 501c3 non-profit organization. The shelter was founded back in 1999. GSR-SP helps find the perfect family for the dogs they have in their care or fosters care.

GSR-SP helps find homes for dogs that have been abandoned, left at a shelter, or in need of a new home. German ShepherdRescue of Southeastern Pennsylvania has different adoption fees for the different age puppies they have.

This additional five dollars covers the cost of transportation, long-distance charges, and other fees that might incur.  You will, of course, have to fill out an application. It is also essential to consider the dog that you are interested in might be taken or might not be a good match for you.

Woody’s Place Senior German ShepherdSanctuary is a 501c3 non-profit organization. The shelter has been in operation since 2011. This Sheppard specifically caters to “senior” German Sheppard’s aged eight years and higher.

Please reach out to them to find out more about Woody’s Place Senior German S Shepherd Sanctuary. This is an appointment-only shelter since this is a private residence.

Char-Will Kennels is located in New Ringgold, Pennsylvania. The founder, Diane’s mother, bred German Shepherd for over 40 years. This shelter is a German Shepherd rescue located on quiet farmland.

Char-Wills adopts families outside of PA, but you will have to travel (by appointment) to meet your new puppy if interested. You will have to fill out an application. Upon review of your application, which could take up to two weeks, you will be contacted.

Every animal you adopt from Char-Wills is spayed/neutered, microchipped, vaccinated, dewormed, and tested. The adoption fee at Char-Wills is $300. Char-Wills also matches based on need. The dog you want might not be the best fit for your family, so please keep that in mind.

They find homes for puppies that have been abandoned, abused, strayed, or even surrendered by their families. You will need to complete an application. The adoption fee for Mid-Atlantic German Sheppard Rescue is $300.

Several things are included in this adoption fee, such as vet services like vaccinations, rabies shots, heartworm treatments. Mid-Atlantic German ShepherdRescue also requires a home visit after submitting your application.  The home visit is to meet your family and other pets to ensure that the dog is going to a loving home.

Why Do Owners Give Up Their German Shepherds in Pennsylvania? 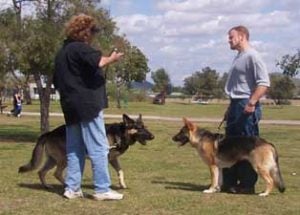 There are several reasons that families might surrender their puppies and why they end up in various rescue centers worldwide.

Not everything about these puppies is bad. Depending on your need for the dog, there are so many positives about adoption.

As with any pet adoption, there are several things to keep in mind before you pick your new pet. Getting a pet is not an impulsive decision. Make sure that you want and understand the commitment and responsibilities that come with owning a pet.

Dogs are a long-term commitment, so make sure that you are mentally and financially stable. Please think of the long-term costs of having a pet, whether vet fees or damages to your apartment/condo or even house.

Make sure the breed of your choice does well with kids or babies if you have one. Understand that pets are very time-consuming. If you are always traveling for work, having a pet might not be for you.

Let’s say you don’t travel for work, but you work long extensive hours and don’t have time to take your dog out or give it the proper playtime it needs? These are all factors, even if everything goes well with the puppy. How much is training in your area? If you feel ready to adopt, then your life will change for the better.

Adopting a pet means you’re not supporting puppy mills. You can find whichever breed you want, you’re giving your puppy another chance at life (especially if you adopt a senior one since many people want puppies), and you have just adopted a lifelong friend.

Conclusion For The “Best German Shepherd Rescues in Pennsylvania”

Adopting a pet means you’re not supporting puppy mills. You can find whichever breed you want, you’re giving your puppy another chance at life (especially if you adopt a senior one since many people want puppies), and you have just adopted a lifelong friend.

For more articles with mentions of the German Shepherd, you can check out: