The Cavapoo and Maltipoo are hybrid breeds of Cavalier King Charles Spaniel and Maltese, each mixed with a Miniature Poodle. They’re small doodle dogs that perpetually look like puppies and can be perfect for small homes and apartments. Cavalier King Charles Spaniel is the type of dog you see in the movie Lady and the Tramp while the Maltese is a sleek, small white dog fit for royalty.

Even though they look cute and are cuddly, potential owners shouldn’t forget about their Poodle side. They’re still descendants from this regal breed that is known for intelligence and trainability. In addition, the Cavapoo and Maltipoo inherit nonshedding and hypoallergenic coat features which are great for pet owners with allergies.

Both the Cavapoo and Maltipoo are smart dogs that benefit from frequent outings and lots of training. They can benefit from formal training by professionals, who know exactly how to instill the right behaviors in dogs when they’re puppies. Below are some of the major differences between a Cavapoo vs Maltipoo: 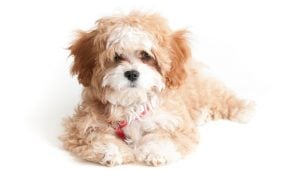 The Cavapoo is a mix between the Poodle (Miniature) and a Cavalier King Charles Spaniel. This breed looks a lot like a Cavalier, with the fur texture and slightly larger size of a Poodle. They’re super smart with a keen sense of hearing and great for apartments or houses with a yard.

The Cavapoo is considered a low-shedding dog breed, as a result of the Poodle genes for their hair rather than fur, that needs to be cut professionally. This breed has been around for only a few decades, but have already stolen the hearts of many devoted pet owners. Many new crossbred Doodles are becoming available that were just fantasies in the past. More still needs to be researched about these breeds, but so far they seem like great dogs.

As a hybrid breed, their fur can vary between Poodle-fluffiness and the Spaniel’s silky texture. Both of these breeds are quite intelligent, so training is a must for a well-adjusted Cavapoo. Don’t let their small size fool you: they’re intelligent and need to be trained properly to avoid big serious behavior problems and destructive tendencies. 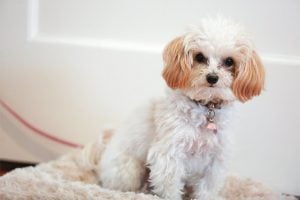 The Maltipoo, on the other hand, is a mix between the Miniature Poodle and the Maltese. This canine hasn’t been around for long either but is quickly becoming popular if you can find the right breeder. Ethical breeders put the parent dogs’ health first, ensuring that the two mating dogs are well-suited for each other. Otherwise, painful births can occur that have the potential to hurt the mother due to the size differentials.

A beautiful, very small dog breed, Maltipoos have a lot in common with the Cavapoo but are even smaller and not as colorful. They have the appearance of a Maltese, with the curly hair and longer limbs commonly associated with a Poodle.

Part of what distinguishes a Maltipoo is its very small size and stature. They’re highly intelligent and active for a small dog, ideal for a family with time to play and train their new pet. Even though they’re often called a designer breed, there are still many available through community-based rescues and shelters.

Cavapoo vs Maltipoo Size: Which is Bigger? 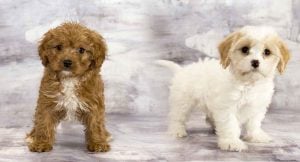 They’re about the same height and weight, making them very similar, but the Cavalier is definitely a stouter breed than the Maltese. Cavapoos will weigh between 9 to 25 pounds and a Maltipoo will weigh between 5 to 20 pounds. As a hybrid, adopters are less likely to know exactly how tall and large their puppies will grow up to become adults.

Cavapoo vs Maltipoo Temperament: How do they behave?

Both of these doodle breeds have outgoing and friendly temperaments. They enjoy spending ample time with their owners and don’t do very well at home for extended periods of time. Loud by nature, these breeds offer guard-dog characteristics that are outsized for their stature.

The Maltipoo is quite a small dog which can be a problem if you have small children. If they’re stepped on, sadly that can result in damage to the spine that can be life-threatening. If you’re concerned about the safety of such a small dog, then it’s important to consider other breeds with greater size and durability.

Maltipoos, as a result of their Maltese genes, also tend to be loud and can make it a challenge if they’re not given enough attention. Both of these are aspects to consider since a large number of Maltese dogs and mixes end up in shelters and rescues because proper research isn’t done beforehand. Understanding the breed, and all its potential flaws, is important to ensure they’re treated ethically with the absolute best chance for success in their new home.

The Maltipoo wants to be by your side at all times, while the Cavapoo is slightly more independent. The Poodle in both the breeds translates to energetic tendencies, as well as intelligence that will surprise many owners. In fact, they’re a good fit for agility classes and other endeavors to train and engage them mentally. 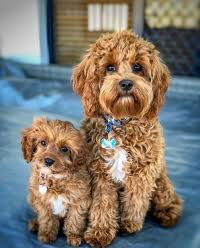 Cavapoos have a life expectancy of about 10 – 13 years, whereas the Maltipoos live to be around 13 – 15. The Maltese is a breed with lots of longevity, and from what we know, this hybrid benefits from this characteristic on both sides. Crossbreed dogs inherit a genetic trait known as Hybrid Vigor. This essentially means that a hybrid dog will be healthy than any purebred dog. This is due to the fact that purebred dogs are constantly bred with the same bloodlines and pass on the same genetic diseases.

True life expectancy should be anticipated to differ more significantly as a result of being a hybrid rather than a purebred. There is a greater chance of variability with these crosses, but dog lovers are finding their canines of both hybrids to live fairly long lives.

Cavapoo vs Maltipoo Health: Are They Prone to Health Conditions?

The Cavalier Spaniel has some eye problems and skin conditions that are not as typical for other breeds, and this applies to the Cavapoo as well. Like most smaller dogs, they don’t have too many joint issues that bigger dogs have. The Cavapoo has mild issues with their skin and eyes, however, this is often avoided with preventative care.

The Maltese can also suffer from eye and skin issues, although less severely than purebred Cavalier King Charles Spaniel. Along with regular issues that affect all Cavaliers and Maltese, there’s an additional risk of neurological disorders and hip dysplasia apparently as a result of the hybridization. These issues can often be avoided by talking with your dog’s vet regularly, and ensuring you’re providing the right diet and exercise for your furry friend.

Maltipoo vs. Cavapoo Appearance: What do They Look Like? 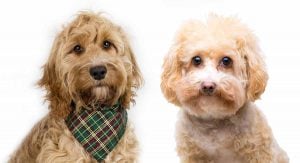 The Cavalier Spaniel is a cute brown, white, and black dog with big floppy ears. The Maltese is another cute breed, also small, with all-white fur and smaller ears similar to a Pomeranian. The Cavapoo and Maltipoo both have the Poodle genes, making their fur a different texture and color. These differences are what make these two breeds unique since each one is different, even if they’re from the same litter!

The Cavapoo is usually a similar color-pattern as a Cavalier, although the texture of fur tends to be more aligned with the Poodle. The Maltipoo, however, tends to be the color of whichever is dominant in the parentage of the Poodle. They have a less all-white coat than a pure Maltese, and their fur tends to favor the Poodle side with the actual color depending on the variety of Poodle in their lineage.

The Maltipoo and Cavapoo are both hybrids and relatively new breeds, thus your new puppy will have some combination of traits for the two breeds. You might have a dog which is much more Cavalier or Maltese, or with predominantly Poodle characteristics. This is always the risk that you have when getting a crossbreed dog.

Cavapoo vs Maltipoo Grooming: How Much do They Require?

The Maltese and Cavalier King Charles Spaniel are pretty similar in terms of how much grooming they require. They both have hair that needs to be cut regularly. However, the Maltese hair grows slower and needs less trimming on average. This can provide a better choice for owners with little experience raising dogs and caring for canine with this type of hair.

The Maltese actually has more skin issues, especially around the face and nose, which can fold, creating issues with skin folds that need maintenance especially in older age. If you’re willing to bathe and wash your Maltese regularly, this shouldn’t be an issue for a veteran dog owner.

These Cavapoo and Maltipoo are perfectly happy with short walks outside and can do well inside during the colder months, only leaving to use the bathroom, as long as the Poodle genes are recessive. Both the Maltipoo and Cavapoo need to have their nails trimmed like all dogs and develop long nails otherwise that can hurt them.

Cavapoo vs Maltipoo Training: Can They be Easily Trained? 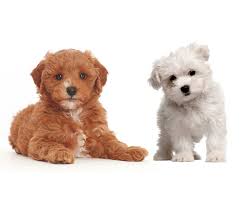 Yes, the Cavapoo or Maltipoo can be easily trained thanks to the intelligence of the Poodle. In fact, they need to be trained or else they can have serious behavioral issues due to a lack of proper mental stimulation. If you’re active, then you’ll have no problem keeping up with these dogs who love to play and fetch.

Unlike purebred Maltese or Cavalier Spaniels, the Maltipoo and Cavapoo need exercise, preferably outdoors, to satisfy their desire to run and retrieve. Whether you hire a trainer or do it yourself, having an active Maltipoo or Cavapoo ensures their health and longevity.

Cavapoo vs Maltipoo Costs: Are They Expensive to Look After?

As Poodle hybrids, the Maltipoo and Cavapoo will require regular haircuts and clippings at the groomer to ensure an even and tidy coat. They’re prone to matting and other issues without regular grooming, so as an owner you must either take them to the groomer or learn to do it yourself.

Both breeds, although small, are super intelligent and benefit from training and behavioral courses that may be expensive. Lastly, as previously mentioned, they’re prone to certain medical conditions that, if developed, could be costly and stressful for pet owners.

Conclusion for Cavapoo vs. Maltipoo

The Cavapoo and Maltipoo are both small Doodle breeders. However, they are several differences between them. First, Cavapoos have more colorful coat colors than a Maltipoo. Second, Maltipoos are generally smaller than a Cavapoo and live a longer lifespan. Third, Cavapoos are the more independent dog breed and don’t have to be by their owners for a while. We hoped you learned something about the Cavapoo vs. Maltipoo!