Cavapoo dogs are going to be extremely different based on the generation you pick. In terms of coat type, hypoallergenic features, and nonshedding features, almost all Cavapoo generations vary due to their genetic makeup.

The way in which dog breeders clarify the genetic make-up of a Cavapoo is via numbers and letters like F1 Cavapoo or F1B Cavapoo. It is essential that you entirely under what the letters and numbers like F1, F1B, F1BB, F2, F2B, F2BB, or F3 (multi-gen) Cavapoo mean. If you do not comprehend the numbers and letters, then you won’t know the kind of physical, personality, or temperament characteristics your Cavapoo will have.

In this article, we are going to describe exactly what the letters and also the numbers indicate so you can determine the Cavapoo generation that is right for you. 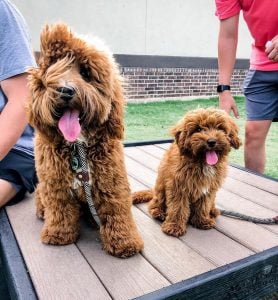 We will start with a quick introduction of the terms so you can understand the numbers and also letters that make up a Cavapoo generation. In this instance, we will discuss what F1B Cavapoo means.

What does the “F” represent?

In the word F1B Cavapoo the F stands for Filial Hybrid. This may seem difficult, but it just indicates that this is a crossbreed dog and not a purebred dog. All Cavapoo generations will start with the letter F because they are a crossbred pet between the Cavalier King Charles Spaniel and the Poodle.

What does the number mean?

What does the “B” stand for?

For an F1B Cavapoo, the B means Backcross. Backcross is a complicated term that means that it was bred back to a full-blooded purebred (either a 100% Cavalier King Charles or a 100% Poodle). Usually, an F1B Cavapoo is a backcross to a 100% Poodle due to the fact that they don’t shed and are great for people with pet allergies.

Genetic Breakdown for Each Cavapoo Generation 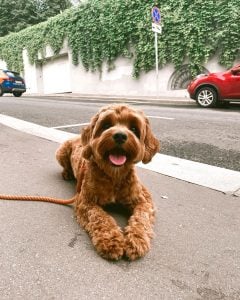 This is a quick reference to get a hereditary break down of each Cavapoo Generation. It saves you time from needing to calculate the hereditary makeup of a Cavapoo.

Cavapoos are usually backcrossed to the Poodle because Poodles are more hypoallergenic and nonshedding genetics. Nonetheless, it ought to be noted that there are some certain instances where a dog breeder may be backcross breeding with a Cavapoo with a Cavalier King Charles Spaniel in which an F1B Cavapoo will be 25% Poodle as well as 75% Cavalier King Charles Spaniel. These instances are rare, and if you’re concerned, you can check with your dog breeder to clarify. 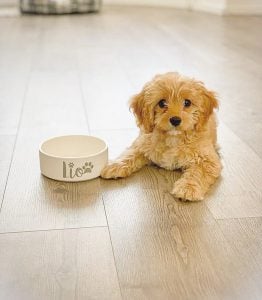 An F1 Cavapoo is one of the most common generations that are sold amongst dog breeders. However, F1 Cavapoo genes aren’t that terrific. This is because the genetics of an F1 Cavapoo can vary extensively which will affect how they look. They can have straight coats that will shed or wavy coats that don’t shed hair. Considering that it is 50% Cavalier King Charles Spaniel as well as 50% Poodle, it’s essentially going to be a coin flip on which genetics the Cavapoo gets. Many Cavapoo owners would prefer not to get an F1 because the genetics are too random.

However, the best part of an F1 Cavapoo is that it gets a health benefit that is called “Hybrid Vigor”. Hybrid Vigor simply means the initial cross between two full-blooded purebreds will be healthier than any of the parent purebred dogs. This is due to the fact that a purebred is essentially inbreeding of the very same genes that cause genetic diseases. Given that Cavapoos are a crossbred or hybrid dog, they will only inherit hereditary diseases that are common to both the Poodle and also Cavalier King Charles Spaniel. 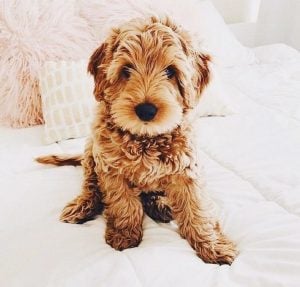 An F1B Cavapoo is 75% Poodle and 25% Cavalier King Charles Spaniel which means that it contains a majority of Poodle genetics. The F1B is one of the most popular generations of Cavapoo since they are just one of the most hypoallergenic and nonshedding. The majority of the dog breeders that breed “allergy-friendly” Cavapoos that do not shed and are allergy-friendly are most likely to be an F1B Cavapoo.

With an F1B Cavapoo, there are some unique features that you will observe in the dog. F1B Cavapoos will practically always have a wavy or curly coat that is acquired from the Poodle genetics. This indicates that it is extremely unlikely to shed any hair. When a dog doesn’t shed, it usually means they are a lot more hypoallergenic than a dog with a straight coat. This is because curly coats shed less dander in the air. The downside of a nonshedding Cavapoo is that you will have to consistently brush your dog, give them haircuts with pet clippers, or take them to the groomers.

F1B Cavapoos are most likely to acquire the personality and characteristics of a Poodle. It’s most likely that they will have taller legs, have lots of energy, and will require physical exercise. If an F1B Cavapoo doesn’t get regular exercise or mental stimulation, they will usually start chewing things around your house and finding alternate ways to release their energy.

F1B Cavapoos additionally obtain a little bit of the health advantages of being Hybrid Vigor. This means that this generation of Cavapoo is likely to be much healthier than the full-blooded parent dogs. An F1B is technically the “2nd” generation Cavapoo so it does not get the full characteristics of Hybrid Vitality. With each passing generation, the amount of hybrid vitality drops. 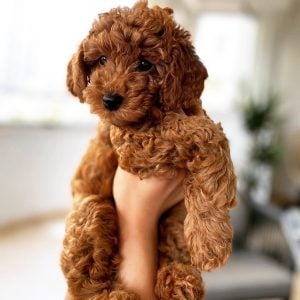 The F1BB Cavapoo is one of the most hypoallergenic and non-shedding dogs of all the first generation Cavapoos because of the large quantity of Poodle genes. This Cavapoo will have a very curly coat that will need to be groomed virtually everyday to prevent tangles. They will also need to be groomed with dog clippers every 6 to 12 weeks. This Cavapoo generation is the best for individuals with pet allergic reactions and also don’t want dog hair all over their floors.

An F1BB Cavapoo is the “3rd” generation of dog so it will certainly have much less Hybrid Vigor qualities as compared to the F1 Cavapoo or F1B Cavapoo. Breeders may likewise categorize the F1BB Cavapoos as a Multi-generation Cavapoo because they are past the 2nd generation. 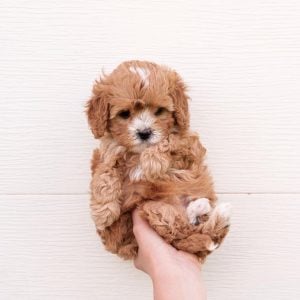 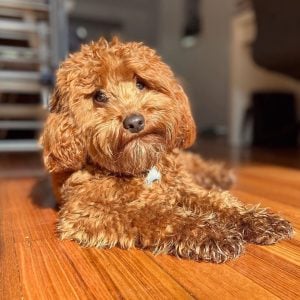 The F2B Cavapoo generation has substantial Poodle genes which creates a wavy or curly coat. This indicates the F2B Cavapoo will usually not shed and also be hypoallergenic. Like most crossbred dogs there are always exemptions to the genetic lottery. A F2B Cavapoo will also need to be regularly groomed with dog clippers. Consider buying a dog grooming kit to do the grooming in your own house.

The F2B Cavapoo generation is usually referred to as a Multi-generation Cavapoo because they are the third generation of offspring. 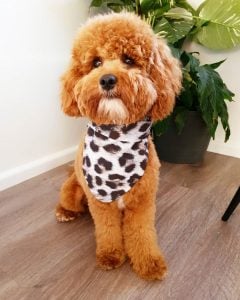 An F2BB Cavapoo is the most hypoallergenic and also non-shedding of all the 2nd generation Cavapoos due to the amount of Poodle genes. This Cavapoo also has the 2nd most Poodle genes, only behind the F1BB Cavapoo (87.5% Poodle & 12.5% Cavalier King Charles Spaniel). It is extremely likely an F2BB Cavapoo will inherit a curly coat that will require to be brushed daily and groomed with dog clippers to prevent the fur from matting. Nonetheless, this Cavapoo generation is wonderful for individuals with dog allergies and do not want to have to have pet hair everywhere. 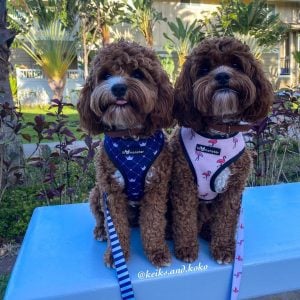 The F3 Cavapoo is also called the Multi-generation Cavapoo. This is the 3rd generation or higher of Cavapoo.

Is F1 or F1B Cavapoo Better?

In the process of researching a new potential canine companion, many prospective owners find themselves pondering which F-type will best suit their home environment and expectations.

With Cavapoos, one of the most common dilemmas involves choosing between an F1 or F1b Cavapoo.

Cavapoos of both F1 and F1b types have their advantages, so it’s up to you to decide which type you would best be able to care for and would best meet your own needs.

If you’re purely concerned with breed pedigree and lineage, you’ll probably automatically gravitate towards F1 Cavapoos. An F1 Cavapoo is a balanced, 50/50 cross between the Poodle and the Cavalier King Charles Spaniel.

The main issue with F1 Cavapoos is that they often shed quite significantly, making them incompatible with owners who have allergies.

From an aesthetic perspective, the F1b Cavapoo coat is often preferred. However, the major difference between the two F-types is that the F1b Cavapoo is more allergy-friendly. F1b Cavapoos may also be less prone to health issues down the line.

Is F1 or F2 Cavapoo Better?

An F2 Cavapoo is the product of breeding two F1 Cavapoos together, whereas an F1 Cavapoo has both a Poodle and Cavalier King Charles Spaniel parent.

The main thing to remember about F2 Cavapoos compared to F1 Cavapoos is the fact that the former is less predictable in terms of the appearance and traits that it will inherit.

The one thing that is relatively predictable about F2 Cavapoos is that they tend to take after the Poodle in a physical sense rather than the Cavalier King Charles Spaniel.

This means that with an F2 Cavapoo, it’s more difficult to predict coat type and you’re less likely to end up with a dog that resembles the typical profile of a first-generation Cavapoo.

Temperament is not likely to vary significantly between these two F-types, but if you’re primarily interested in Cavapoos for the classic 50/50 aesthetic split, then you are likely to prefer an F1 to an F2.

However, if you have allergies, an F2 Cavapoo will definitely be the better choice for you because F2 Cavapoos have shorter, curlier coats that don’t shed as much.

There are several generations of Cavapoo and most dog owners would prefer one with more Poodle genetics. This means that they will be more hypoallergenic and nonshedding than a dog more Cavalier King Charles genetics. The top 3 choices for the Cavapoo Generations with the most Poodle genetics are:

If you don’t care about your dog being hypoallergenic and nonshedding, you should base your opinion more on the coat color and coat type. If you want a more curly coat that calls for a substantial amount of dog grooming choose a Cavapoo that has a more Poodle genes. If you desire a Cavapoo with a much more straight or flat coat that will often tend to shed, choose a Cavapoo generation that has more Cavalier King Charles Spaniel genetics like an F1 Cavapoo or F2 Cavapoo.