Are you searching for interesting facts about the brown Cockapoo? Cockapoos are one of the most adorable, friendly breeds of dogs out there. There’s nothing more satisfying than letting one of these playful little puppies into your family as they’re as sweet and great as children.

Did you know that Cockapoos are extremely intelligent? They’re a cross between a Cocker Spaniel and a Poodle, two of the most intelligent breeds. Once you learn about the Cockapoo, you’ll want to adopt one yourself. If you’re itching to learn about this fantastic puppy, then strap in because we’ve got these exciting facts about the Brown Cockapoo right here.

Before you scroll down this list of interesting facts about the brown Cockapoo, you can check out these other recommendations from our team at We Love Doodles: 100 Best Black and Brown Dog Names and Best Brown Dog Names.

1. Brown Cockapoos Aren’t the Only Color Out There, And Their Coats Can Change Over Time 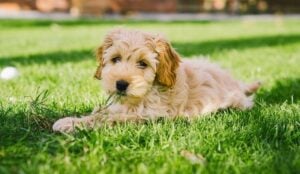 Cockapoos can come in various colors, such as brown, black, or a mix. There are so many combinations you’ll likely see many distinct types. There’s also something known as the “fade gene,” which they get from their Poodle parents. This gene may cause their coat to change throughout life and shift from one color to another as they age.

This usually is just a fade from a dark color to a lighter one. For example, a dark brown one may develop a cafe coat over time, while a black one might transition into a grayish one. This also can lead to spotting unique patterns on each puppy.

2. Brown Cockapoos Are Hypoallergenic And Don’t Shed Very Much 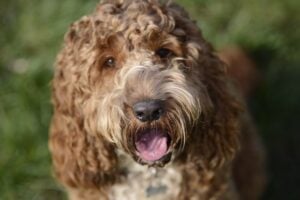 If you’re looking for a Cockapoo, you’ll be happy to know that they don’t shed much. Due to their Poodle and cocker spaniel parents (who aren’t known for shedding), their coats stay smooth and fresh without making a huge mess. This means that neat freaks and people who don’t like hair all over their house can rejoice as Cockapoos are one of the cleanest puppies.

3. Brown Cockapoos Have Tons of Energy, Which Means Tons of Fun

Cocker Spaniels are pretty well-known for being energetic, and it seems that the beloved Cockapoo brown-colored has inherited this trait. Despite their small size, you’ll be ecstatic to know they’re more than just lap dogs; you can expect long periods of play every day. The little balls of energy don’t tire easily, which makes them go so well with kids. Besides that, the Cockapoo can be found lazing around at night after a long day of play, getting ready for the next day.

Related: Do Cockapoos Need a Lot of Exercises? 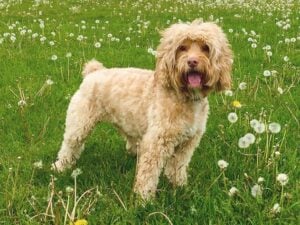 Unfortunately, like many other small dogs, Cockapoos are prone to getting a case of nasty dog breath. This is simply because little dogs have higher buildups of bacteria and plaque than larger dogs, resulting in slightly more stinky breath. Still, don’t let this deter you, as getting your dog’s teeth cleaned regularly can prevent buildups and give your dog the chance to give you plenty of kisses. 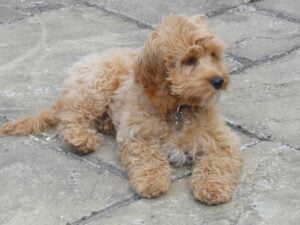 Unlike many large breeds of dogs, Cockapoos have a pretty long lifespan. If you factor out any potential health conditions or ailments, you can expect the average Cockapoo to live anywhere between 14 and 16 years. And that’s not to say they can’t live long, either. So if you want a little companion that will be around for a long time, you might consider getting yourself a Cockapoo.

Related: How Big Do Cockapoos Get?

6. While a Brown Cockapoo’s Breathe Might Smell, Their Bodies Don’t 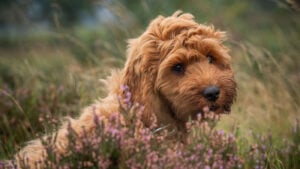 As we mentioned, Cockapoos have notoriously bad breath, but that’s the extent of their stinkiness. Their bodies are generally odorless, so you never have to worry about them stinking up your house with an unruly smell. Just as long as you clean your puppy regularly and brush them every once in a while, you shouldn’t expect to smell them once in their lifetimes. Well, except for right after a bath. Wet dogs are pretty universal, after all.

7. A Brown Cockapoo Can Weigh Up to 19 Pounds Heavy 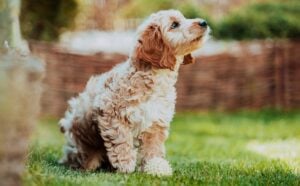 The size and weight of a Cockapoo can vary greatly and depends on its genetic makeup. They can weigh as little as six pounds or as much as 19 pounds. To be specific, there are three main classifications of Cockapoo: maxi ones (around 19 pounds or more), miniature (between 10 and 18 pounds), and toys (under 10 pounds). Other than their size, there isn’t much difference between the varieties, so which one you decide to get is just a matter of preference. 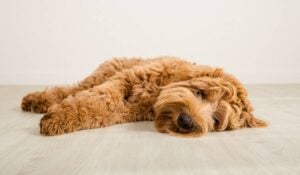 Unlike some noisy dog varieties, the Cockapoo brown variety doesn’t snore or bark all that much. They’re not entirely silent beings, though. A Cockapoo will bark when you have visitors or if they get spooked, so keep that in mind.

Still, you can at least expect to get a good night’s rest most of the time and not have your pet constantly barking at nothing. Well, we can’t promise that as all dogs have different personalities and behaviors, but in general, Cockapoos are one of the quieter breeds. At the very least, they’re no Chihuahua.

Related: How to Stop Your Cockapoo Barking.

9. Brown Cockapoos Are Easily Trainable and Quite Clever 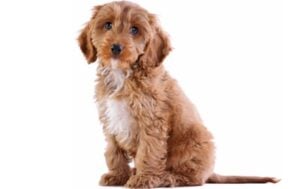 Being outsmarted by your dog isn’t something you can often expect, but the Cockapoo is one of the exceptions. Not only are they exceedingly intelligent, but they’re also very curious and enjoy learning new things every day. Their high intelligence also makes them easy to train and, in turn, pretty manageable when first introducing them to your house.

The wit of the Cockapoo isn’t astonishing, considering that their parents are a Cocker Spaniel and a Poodle, two already-intelligent breeds. Combining them gives you a puppy with almost human intelligence levels. Well, almost. They won’t be ready to talk about fine literature soon, that’s for sure.

10. Brown Cockapoos Are One of the Oldest Modern Crossbreeds 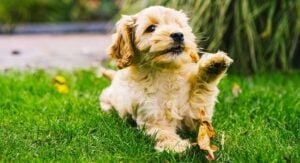 Cockapoos seem like the perfect dog, so they must result from more recent breeding methods, right? Well, the Cockapoo originated in the 1960s and has become a common breed worldwide. They’re most popular in the United States and Europe but can sometimes be found in Asian countries.

The price of this bread will vary depending on the country. In the US and the UK, it’s upwards of USD 1,000. But the Cockapoo price in the Philippines, for example, is around PHP12,000 (~USD 215). If anything, these pooches worldwide wonder that they tend to spread their cuteness wherever they are. 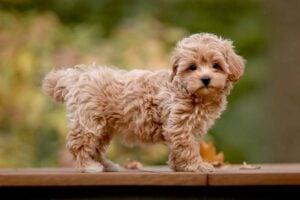 The UK Kennel Club is among the world’s oldest and most recognized kennel clubs. This club is responsible for many dog-related activities such as care, dog shows, and general dog-related information. Despite this, it still doesn’t acknowledge the Cockapoo as a legitimate dog breed despite how long they’ve been around.

This is because the Cockapoo is a crossbreed, and this specific club doesn’t acknowledge crossbred dogs. This doesn’t mean anything more or less for the Cockapoo, so don’t get cold feet when considering whether or not to adopt one.

12. Brown Cockapoos’ Personalities Don’t Vary All That Much 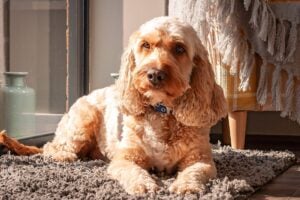 What’s interesting is that Cockapoo breeders focus mainly on the dog’s appearance, so much of their personalities are more or less the same. That doesn’t mean all Cockapoos will act exactly like each other per se, but you should expect them to behave widely differently, too. 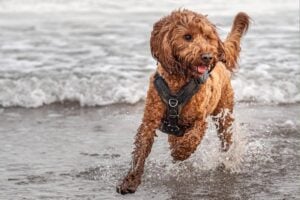 Remember when we said that maxi Cockapoos could grow over 20 pounds? Well, it gets crazier than that. The maxi Cockapoo can grow up to 65 pounds, which is monumentally bigger than the average version of the breed.

This is interesting considering that Cockapoos are generally regarded as small lap dogs, and while, for the most part, they are, the maxi is the exception. Still, whether you’re holding your Cockapoo in your hand or lifting them with a forklift, you can expect tremendous love from them all the less.

14. The First Cockapoo Was Created By Pure Accident 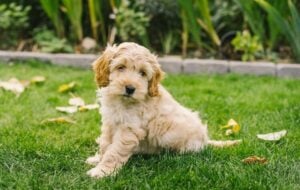 When Cockapoos were first introduced into the world in the 60s, they resulted from an accident. They first came into existence when breeders were experimenting by breeding a Cocker Spaniel and a Poodle, which resulted in the Cockapoo. Since then, the Cockapoo has become a treasured mascot in countries globally.

15. The Hair on the Cockapoo Can be Either Curly or Wavy 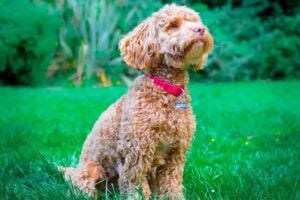 Depending on your Cockapoo’s dominant and recessive genes, the fur on its coat can turn out to be curly or wavy. Regardless of your type, you can still expect minimal shedding and varying coat colors; it changes their outward appearance a little.

Conclusion For “Interesting Facts About The Brown Cockapoo”

With so many intriguing and perplexing aspects of the Cockapoo, there’s no reason not to get them. Not only are they the ideal family dog, but there are so many different aesthetic options you’ll have a hard time choosing what you want.

If anything more can be said about the Cockapoo brown variety, they are amazing and some of the cutest creatures you’ll ever lay eyes on. Plus, they’re around for a long time, and a good time, so they have no downsides.

If you find this guide, “Interesting Facts About The Brown Cockapoo,” informative, you can check out these other related guides from our team at We Love Doodles:

If you think you learned a lot about the brown Cockapoo, you should watch “10 Important Facts About Cockapoo Every New Mom Should Know” down below: