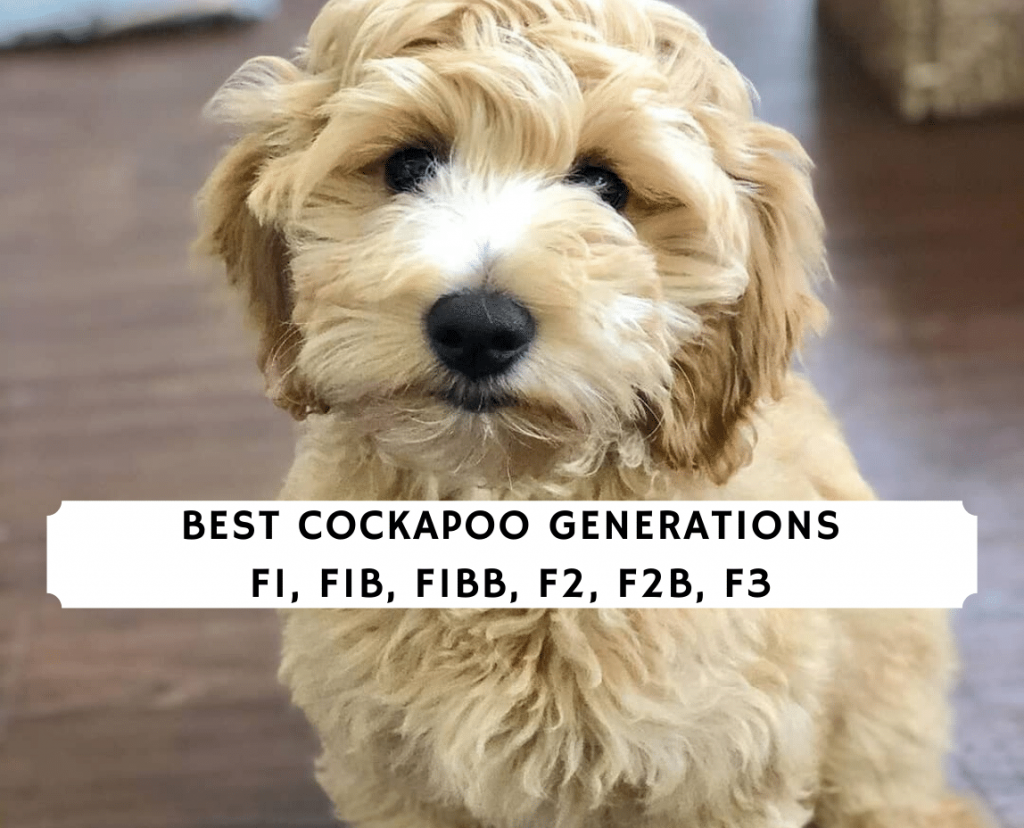 In this article, we are going to explain each Cockapoo generation and give you the genetic makeup of each generation so you can decide which one is right for you.

If you have a Cockapoo, check out our Cockapoo Grooming Guide. 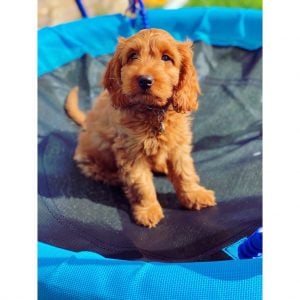 Let’s review the numbers and letters that make up each Cockapoo generation. For example, we will explain what an “F1B Cockapoo” means.

What does the “F” represent?

In the word “F1B Cockapoo” the F stands for Filial. It’s short for a word meaning Filial Hybrid which simply means this is a hybrid dog. All Cockapoo generations will always begin with the letter F because they are a crossbred dog between the Cocker Spaniel and the Poodle. This simply helps to distinguish that it isn’t a purebred dog.

What does the number represent?

For an F1B Cockapoo, the 1 represents the generation of the Cockapoo. In our example, the number is 1 which means that the dog is a first-generation Cockapoo. This is the offspring between a Cocker Spaniel and a Poodle.

What does the “B” stand for?

In our F1B Cockapoo example, the B stands for Backcross. Backcross is a complex term that means that means was bred back to a purebred dog (either to a 100% Cocker Spaniel or a 100% Poodle). Almost always, an F1B Cockapoo is a backcross to a 100% Poodle because they don’t shed and are more hypoallergenic than the Cocker Spaniel. You can also have multiple B’s in a name like the F1BB or F2BB. This just implies the Cockapoo was backcrossed twice.

Genetic Breakdown for Each Cockapoo Generation

Cockapoos are almost always backcross bred to the Poodle for the hypoallergenic and nonshedding genetic makeup. However, it should be noted that there could be a case where a breeder may be backcross breed with a purebred Cocker Spaniel in which case an F1B Cockapoo will be 25% Poodle and 75% Cocker Spaniel. However, this is very unlikely. Check with your breeder if you’re unsure. 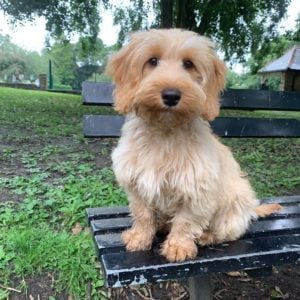 An F1 Cockapoo is popular amongst breeders who have a purebred Cocker Spaniel and purebred Poodle. However, F1 Cockapoo genetics aren’t considered highly desired. This is because the F1 Cockapoo has a wide range of looks. For instance, an F1 Cockapoo can have a straight coat that will shed like crazy or wavy coats that are non-shedding. Since it is 50% Cocker Spaniel and 50% Poodle, it’s basically going to be a coin flip on which genetics the dog receives (or it may receive a combination of both genetics). Most dog owners would not prefer an F1 Cockapoo for this reason.

The F1 Cockapoos coats can be smooth and look like the Cocker Spaniel or curlier and look like the Poodle. One good aspect of F1 Cockapoos is that they gain the most health benefits of a term called “Hybrid Vigor”. Hybrid Vigor means the first generation between two purebred dogs will be more healthy than the parent purebred dogs. This is due to the fact that purebreds are basically inbreeding of the same genes which causes hereditary defects to be passed down to each generation. Since Cockapoos are a hybrid dog, they will only inherit genetic problems that are common to both the Poodle and Cocker Spaniel. 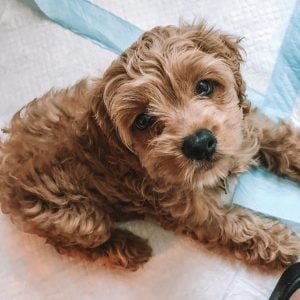 An F1B Cockapoo is 75% Poodle and 25% Cocker Spaniel by genetic makeup. The F1B is one of the most popular generations of Cockapoo because they are mostly hypoallergenic and nonshedding. Most of the breeders that claim to breed Cockapoos that don’t shed and are allergy-friendly are going to be F1B Cockapoos.

With the F1B Cockapoo, there are some distinct genetic traits that you will notice in your dog. First, F1B Cockapoos will almost always have a wavy or curly coat that is inherited from the Poodle. This means that it is very unlikely to shed fur all over the place. This also implies that your dog is going to be more hypoallergenic than a Cockapoo with a straight coat. The downside of a nonshedding coat is that you will have to regularly groom your Cockapoo with dog clippers or take them to the groomers every 6 to 12 weeks.

Lastly, F1B Cockapoos gain a little bit of the health benefits from being Hybrid Vigor. This generation of Cockapoo is usually going to be healthier than any of the purebred parent dogs. An F1B is technically the “2nd” generation Cockapoo so it does lose some characteristics of Hybrid Vigor. With each passing generation of offspring, the amount of hybrid vigor decreases. 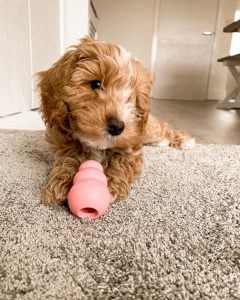 The F1BB Cockapoo is the most hypoallergenic and non-shedding of all the first generation Cockapoos due to a large amount of Poodle hereditary qualities. This Cockapoo will come with an extremely curly coat that doesn’t shed and will need to be brushed every day and groomed with dog clippers every 6 to 12 weeks to prevent the fur from tangling and matting. This Cockapoo generation is the best for people with pet allergies and don’t want fur all over the place. 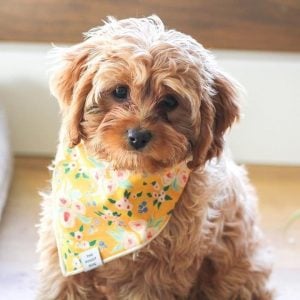 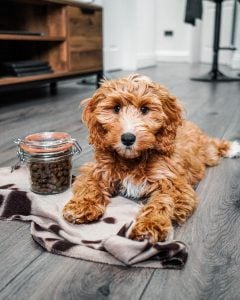 The F2B Cockapoo generation has significant Poodle hereditary qualities which usually results in a wavy or curly coat. This means that it’s likely the Cockapoo will not shed and be hypoallergenic. However, like most hybrid dogs there are always exceptions to the genetic rules and this might not be true.

The F2B Cockapoo generation is sometimes referred to as a Multi-generation Cockapoo since they are the 3rd generation of offspring. 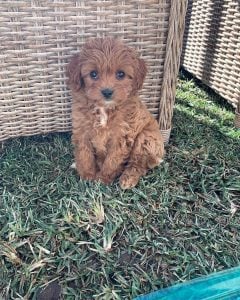 F2BB Cockapoo is 81.25% Poodle & 18.75% Cocker Spaniel and is a cross between the F2B Cockapoo (62.5% Poodle, 37.5% Cocker Spaniel) and usually an original purebred 100% Poodle. Since this is at least the second Backcross with a purebred Poodle, it gets a second “B” in its name and is referred to as the F2BB Cockapoo.

An F2BB Cockapoo is the most hypoallergenic and non-shedding of all the second generation Cockapoos due to the large amount of Poodle genetics it inherits. This Cockapoo also has the 2nd most Poodle genetics, only behind the F1BB Cockapoo (87.5% Poodle & 12.5% Cocker Spaniel). It is very common the F2BB Cockapoo will a curly coat that will need to be brushed every day and groomed with dog clippers every couple of months to prevent the fur from matting. However, this Cockapoo generation is great for people with pet allergies and don’t want to have to pick up dog fur around the house and car.

The F2BB Cockapoo generation is usually going to be referred to as a multi-generation Cockapoo since they are the 4th generation of offspring. Many breeders won’t use the term F2BB but call this dog a multi-gen Cockapoo. 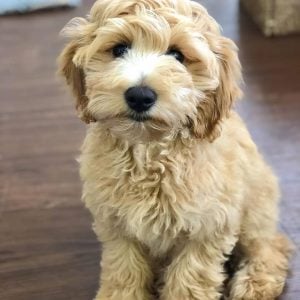 The F3 Cockapoo is also called the multi-generation Cockapoo. This is the 3rd generation or greater of Cockapoo. 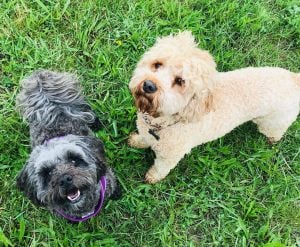 Usually dog owners like a Cockapoo that has a significant amount of Poodle genetics because they are nonshedding and hypoallergenic. If you want a dog with more Poodle genetics, you should look for the following generations of Cockapoo:

However, if you like the look of a Cocker Spaniel, you may opt for a generation of dog that has more Cocker Spaniel genetics. If you want a Cockapoo with a more straight coat like the Cocker Spaniel pick the F1 Cockapoo or F2 Cockapoo. However, just know that it likely these dogs will shed. We hope that you enjoyed our guide!

For more information about Cockapoos, you can visit the American Cockapoo Association.