The Bernedoodle is a mix between the Bernese Mountain Dog and a Poodle, while the Goldendoodle is a Golden Retriever mixed with a Poodle. Both are intended to be low-shedding and hypoallergenic dogs that are both playful and loving creatures for families.

These two hybrid dog breeds might be best known for their lack of shedding, but true lovers of these crosses consider their most wonderful characteristics to be their friendly demeanor and beautiful coat appearance. They’re both big, but the Bernedoodle is definitely the larger of the two, both in height and weight.

They’re popular choices for lovers of medium to large-sized dogs, especially within households where family members are sensitive to pet dander. Both of these hybrid breeds are wonderful pets, known for their warm and energetic personalities, as well as intelligence and playfulness. In this article, we will compare the Bernedoodle vs Goldendoodle and go into an in-depth analysis.

Here are some of the major differences between the dog breeds that we will talk more about throughout the article:

What is the Bernedoodle? 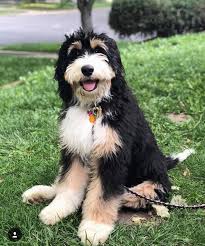 The Bernedoodle is a mixed breed, combining the traits and best characteristics of a Bernese Mountain Dog and a Standard Poodle. Bernese Mountain Dogs are known for their exceptionally large size and luxurious coats of fur, making them appear even larger.

On the other side of the mix, a Standard Poodle is another large breed of dog that’s the second most intelligent of all dog breeds. The Poodle can come in several different colors, with white, black, and brown being some of the most recognizable and gorgeous. In fact, they come in over 10 different standard coat colors so you will see all types of color variations.

They’re extremely intelligent dogs that tend to shed minimally, need haircuts regularly, and love to fetch. They’re a special dog breed with a long history, originally bred with long hair to protect their organs, as well as a tall stature and strong build overall.

The Bernedoodle is a large dog without as much size or the shedding of a Bernese Mountain Dog. Many breeders use a toy or miniature Poodle to create the famous tiny Bernedoodle or mini Bernedoodle breeds. These are a smaller sized dog that fits well in smaller living spaces.

What is the Goldendoodle? 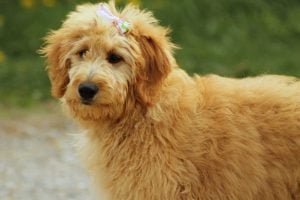 The Goldendoodle is a hybrid breed known for its loving personality and mixture of Golden and Poodle traits. Their fur can be either straight, curly, or wavy, depending on how much of the Poodle genetics they receive. This breed is a mix between a Golden Retriever, and the Standard Poodle.

The Golden Retriever is one of the most popular breeds for all kinds of families and homes. In fact, according to the American Kennel Club, they are the #2 most popular purebred dog breed. Their gentle presence and traditional beauty make them a top choice for many families with small children and other pets.

The Standard Poodle adds height to the Goldendoodle and more lanky limbs than a Golden Retriever. These dogs, just like the Bernedoodle, have an affectionate and loving temperament, as well as a large size compared with other dog breeds and crosses.

The Goldendoodle is one of the most well-researched Poodle hybrids, and many breeders have several generations of experience breeding the dog. Goldendoodles are popular for their moderate size, with most of them being about 22-24 inches tall.

In between a Poodle and a Golden in height, a Goldendoodle is manageable for someone with a large home or fenced yard for them to play in. As a hybrid with a beautiful appearance and hypoallergenic qualities, this breed is a very active breed and loves to play and swim which is a characteristic common among Golden Retrievers.

In addition, Goldendoodles are always willing to run and walk with their loving owners, even for several miles at a time. The Goldendoodle is a breed that typically gets along well with other dogs and protects their owner’s house with loud barks but quickly warms up to strangers and other dogs.

The Poodle genes make the Goldendoodle more reserved, but the Golden Retriever friendliness shines through in many puppies and adult dogs of this breed. Goldendoodles are arguably the most popular hybrid dog breed in the entire world.

Bernedoodle vs Goldendoodle Size: Which is Bigger? 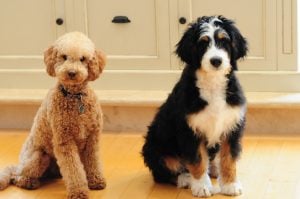 Both of these hybrid breeds are considered large breeds, however, the Bernedoodle is slightly larger. This is due to the very large size of the Bernese Mountain Dog which can weigh up to 115 pounds on average. This is almost double the size of a Golden Retriever, which typically weighs 55 to 65 pounds. Although both of these hybrids are quite large, the Bernedoodle is both taller and heavier as a general rule. Standard Bernedoodles are often taller than 25 inches which most Goldendoodles are 23 inches.

Like any hybrid breed, the exact size of your puppy will be somewhat of a surprise, due to the variety within a hybrid breed. It’s impossible to speculate exactly how much genetically the puppy will receive from each side of its mix.

However, each breeder will be able to tell you which size of Goldendoodle or Bernedoodle the litter will be. This helps determine how much variability there will be within the litter, including the different sizes, the coloration of the individuals within the litter.

In general, there are three main sizes for a Bernedoodle:

Also, there are three main sizes for a Goldendoodle:

Goldendoodle vs Bernedoodle Temperament: How do they behave?

Both the Bernedoodle and the Goldendoodle have incredibly social and friendly personalities. Their demeanor is characterized by cuddling frequently with their owners, as well as enjoying spending time with other dogs. The Goldendoodle is slightly more friendly, however, both breeds are considered loving and friendly dog breeds for all families with children.

Both of these hybrids dogs are considered good companion pets, with happy and loving personalities. In fact, the Goldendoodle has even been used as guide dogs and therapy dogs in the past, a testament to their relaxed and friendly personalities.

The Bernedoodle is known as a truly happy and friendly dog, although their very large size can be dangerous for those who are physically vulnerable, like the elderly. However, Bernedoodles are definitely more calm than a Goldendoodle. 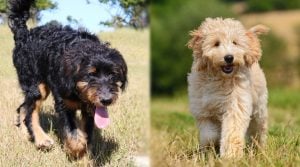 This is a fairly long life span, considering that some large breeds like mastiffs online live about 8 years on average. In fact, both the Goldendoodle and the Bernedoodle have the potential to live over 15 years if given the proper care and preventative treatment over their lifetimes.

In general, small breed dogs tend to live longer than larger breed dogs. So if you end up getting a mini Goldendoodle or a mini Bernedoodle, I would expect them to live significantly longer than a standard size.

Bernedoodle vs Goldendoodle Health: Are They Prone to Health Conditions?

Both these hybrid breeds have some predispositions to health issues, although neither one is significantly worse than the other. The Goldendoodle is predisposed to such ailments as heart stenosis, glaucoma of the eyes, and sebaceous adenitis, a skin disorder. Although this may sound scary, it’s important to realize that every breed of dog will have certain medical predispositions, not just this breed.

The Bernedoodle, as a general rule, is prone to developing allergies, hip dysplasia, and eye problems. Although both these hybrids have some potential health concerns, they’re both considered healthy breeds with good life expectancies. The Bernedoodle has the potential to become a very large dog, which leads to issues with joints like the hip and elbow becoming displaced over time.

In general, hybrid dog breeds are more healthy than purebred dog breeds. This is because they inherit a trait known as “Hybrid Vigor”. Typically, purebred dogs are interbred with the same genes and are exposed to the same genetic diseases. By crossbreeding a dog, you introduce to new and healthier genetics so they aren’t interbred between the same bloodlines. A crossbred dog will always be genetically healthier than any of the purebred parent dogs. 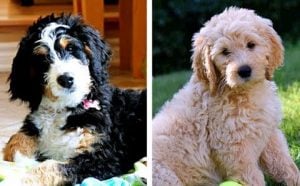 Both of these breeds can vary in their appearance and coloration. As mixes with Poodles, both breeds can have fur that’s straight, curly, or wavy. This depends on the genes they receive from both of the original breeds. The Goldendoodle has beautiful golden coloring, similar to the Golden Retriever coat, which usually doesn’t vary.

The Bernedoodle, on the other hand, can vary greatly in their coloration. The most common coloring is called the Traditional Tricolor, which is mostly dark brown, along with accents of white and golden brown. They also come in Sable coloration, which is more of a chocolatey brown with minimal white accent colors. Bernedoodles are more varied, while Goldendoodles are typically only available in one color: golden.

The Bernedoodle requires more grooming than the average dog, starting with brushing at least twice weekly to prevent mats and tangles. Due to the nature of their fur, matting can occur if they’re not groomed with a specialized brush every week. Also, they have fur that needs to be cut on a semi-regular basis, usually by a groomer every three or four months. Both Bernese and Poodle dogs have fur that requires grooming, so be ready for a lot of hair with this one as your companion.

Goldendoodles need to be groomed almost as often, usually requiring professional grooming services every two months. At the groomer, they need to be given a haircut that can vary in length between short and long. They also need to be brushed by their owner between groomer visits, although not quite as often as the Bernedoodle – once or twice a week is plenty.

Bernedoodle vs Goldendoodle Training: Can They be Easily Trained? 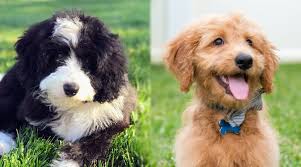 Goldendoodles and Bernedoodles are both very trainable and intelligent dogs. Known as clever breeds, they can be potty-trained without issue and respond well to other commands by owners and professionals. According to the experts, Bernedoodles tend to be slightly more stubborn than Goldendoodles, especially as puppies.

However, both of these dogs are bred for their intelligence and trainability, making them great for learning commands and other tricks for their humans. If Bernedoodles aren’t trained properly, they’re more likely than Goldendoodles to develop behavior problems that owners may find difficult to manage: training and crating is a must!

Bernedoodle vs Goldendoodle Costs: Are They Expensive to Look After?

The Bernedoodle and Goldendoodle are both fairly expensive to purchase and look after, which is due to similar potential health problems. The Bernedoodle has more issues because of its size, including more dysplasia in the joints, but the differences are nominal.

In fact, both require a similar amount of grooming, including regular haircuts other very typical veterinary care. They both have certain medical risks, which may or may not lead to more frequent visits to the veterinarian. Like many hybrid breeds, there is great variability between one litter, and even one puppy, to the next.

The cost of a Bernedoodle and Goldendoodle is relatively the same. However, you will definitely pay more upfront money if you are looking for a tri-color Bernedoodle. Generally, the more coat colors a dog has, the more money you will pay.

Conclusion for Bernedoodle vs. Labradoodle

We have tons of information on our site where you can learn about the Berendoodle or Goldendoodle. We also have several breeder recommendations that you search or contact us to ask!