If you live in an area with tons of wild animals, one question you’d probably ask yourself is: “Will a groundhog attack a dog?” If you are a hunting enthusiast, you may have considered hunting groundhogs with your dog on your next trip. You may also live in a wooded area where groundhogs are known to live. These animals are herbivores who burrow into the ground as a means of surviving the many predators who hunt them.

It’s natural to want to know as much as you can about groundhogs if you’ll be hunting them or live near them. You would, of course, consider your dog’s welfare. It’s important to know if your dog might come into any harm if it comes to face to face with one. Are there any risks involved, and if there are, what are they? How can you prepare for them? Let’s take a closer look and find out.

Before scrolling down this article “Will a Groundhog Attack a Dog,” check out: Will a Fox Attack a Dog and Are Opossums Dangerous to Dogs?

A Bit About Groundhogs

Groundhogs — also known as woodchucks or by their scientific name Marmota monax — are giant ground squirrels and exceptional solitary marmots. They’ve made many parts of the United States their home while many homeowners regard them as nuisances because of their capacity for property destruction. They would make great neighbors if not because their burrows can damage the structural foundations of homes and buildings. Unfortunately, their penchant for constantly chewing everything around them, including plants and fruits, can also be destructive.

Do I Live Close to Groundhogs?

It isn’t hard to tell if you’re living close to one or two. They aren’t shy, so you’ll quickly see them getting some sun on your lawn or resting on top of the fences. You may also visit their handiwork in chewed-up plants and wood. Their teeth marks are similar to the ones rabbits leave behind but bigger. Groundhogs generally aren’t much of a threat to pets. Since they’re herbivores, they’re more attracted to what you’re growing in your garden.

If you want to keep them away from your pets and yard, erecting a fence they can’t climb over or dig under is the best way to do so. Woodchucks aren’t all bad, though. They are, in fact, the most famous marmot for being harbingers of spring. Hibernating from October to March, tens of thousands of people wait for Punxsutawney Phil to emerge from hibernation on Groundhog Day as a sign that spring is on its way.

Can a Groundhog Attack a Dog? 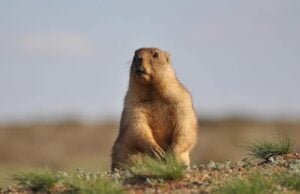 Groundhogs can attack a dog, but it isn’t something they’d do naturally. These animals are non-confrontational and are much more likely to burrow underground than initiate conflict with a dog. The only time a groundhog might attack a dog is for self-defense or to allow it to make a quick dash for its burrow. However, don’t underestimate groundhogs. Despite their tame and furry appearances, they can do some damage to your dog thanks to their sharp incisors, which are capable of piercing skin. In general, however, groundhogs will avoid physical confrontations as much as possible. Their primary instinct is avoidance for survival.

Can a Groundhog Hurt My Dog?

If a dog and a groundhog were to face off against each other, who would win? If you’re betting on the dog, you’re right, but that doesn’t mean the dog won’t come away unscathed. There are several factors you need to take into account, like your dog’s size. A large breed like a Golden Retriever or Labrador can easily overcome a groundhog. However, that isn’t the case for a Chihuahua, Pug, or Bichon Frise.

They don’t have the speed and size to overpower prey quickly. On the other hand, dogs are naturally curious, so even if your dog isn’t a strong hunter, it’s still likely to chase a groundhog to its burrow. You’ll know when it does this because you’ll find it yapping and growling at a hole. Many will make the mistake of putting their faces inside a burrow, while some will even dig at the hole to reach their prey.

Groundhogs Will Fight Back

When cornered like this, groundhogs can become fierce and forced to fight for their lives. Just like other animals, groundhogs gain an advantage when fighting from their homes. After all, it is their “turf,” and a nose-to-nose confrontation puts them on almost equal footing with a dog, especially a small one. From this vantage, they can bite and scratch fiercely to discourage predators. When dogs come up against a groundhog and get hurt, they usually walk away with wounds on their faces and ears. You may have utter confidence in your dog’s hunting capabilities, but if your dog is small, it’s better to exercise some caution and keep an eye on it, especially when outside.

Can a Dog Hurt a Groundhog? 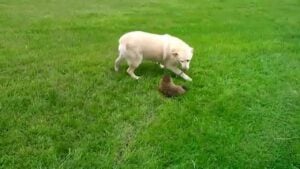 Dogs can hurt and kill groundhogs. Remember that dogs are natural predators and will give chase to prey. However, dogs can be part of the solution, whether hunting or dealing with groundhogs causing problems on your property. Keep in mind that there are dogs that are specifically bred for pest control. Yorkshire Terriers, Rat Terriers, and Jack Russell terriers all have the impressive stamina and drive to catch and kill rodents, including groundhogs. Large dogs with high prey drive will have little problem finding and attacking a groundhog. For dogs, hunting is part of the recreational play – an opportunity to follow their instinct. If your dog can handle groundhogs and hunting, it’s a great way to provide it with the physical and mental stimulation it needs.

Groundhogs have been known to scratch and bite, but they only do so to defend themselves, as we’ve stated before. Perhaps a bigger concern than their bites is the risk of getting infected with rabies. Groundhogs are carriers of the rabies virus. If your dog gets bitten by a woodchuck, your dog may experience flu-like symptoms that will eventually progress into insomnia, hallucinations, and delirium. Rabies can be fatal so if you notice that your dog has a bite, get your pet to the vet as soon as possible. Groundhog bites are also painful and can open up the skin. Open wounds need sanitation and disinfection of the affected area.

What Do I Do If a Groundhog Bites My Dog?

Check the wound site to see if the skin was broken. If the bite resulted in an open wound, clean the area and apply some antibacterial cream. Depending on the size of the wound, your dog may require stitching. If your dog is vaccinated and up to date with its booster shots, then your dog should be protected from rabies.

However, if the groundhog’s bite did not break your dog’s skin, all you need to do is clean the infected or bruised area with water and mild soap. If you’re still worried about your dog, you can always call your vet and explain what happened. Your animal doctor can provide you with a recommendation on whether to bring your dog in or not.

Other Groundhog-Related Risks to Your Dog 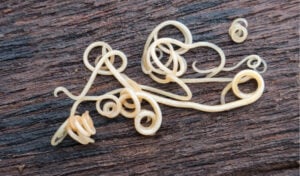 Apart from rabies and bites, there are other risks your pet encounters by being around groundhogs.

Conclusion For “Will a Groundhog Attack a Dog”

Overall, dogs — even small ones — will always have the upper hand with groundhogs. However, that doesn’t mean they can’t hurt them. If you have groundhogs living in or near your property, you may want to find ways to get rid of them to minimize the damage they’re known to cause homes and potential encounters with your dog. It’s also a great idea to make sure your dog is up to date with its rabies shots.

For more articles with dogs and other animals, check out:

To see a dog and a groundhog live in action, watch “Prairie Dog Plays with Bigger Dog” from ViralHog down below: