When does a Maltipoo stop growing? Before moving further on the topic, here are some important things you should know about the Maltipoo. A Maltipoo dog typically weighs between 5 and 20 pounds and stands between 8 and 14 inches tall. As a result, they also depend on their size, whether they are small, medium, or mini.

How big can Maltipoo become in its various and specific forms? Depending on the puppy’s breed size – tiny, toy, miniature, or medium – a Maltipoo can reach its full adult stage as a crossbreed between a Maltese and a Poodle (Mini or Toy).

Before scrolling down to the answer to this guide, “When Does a Maltipoo Stop Growing,” you can check out these other Maltipoo guides from our team at We Love Doodles: Maltipoo Pros and Cons and Male vs. Female Maltipoos.

How Big Do Maltipoos Grow?

Maltipoos are not predictable in size, but most will weigh 7 – 14 pounds as adults and stand between 8 – 12 inches tall at the withers. In the same way that genetics determine the potential size of people as adults, it is true for size in particular. Certain things determine a dog’s size.

A Maltipoo, a Maltese, and a Poodle cross is a small dog breed. The miniature Poodle is sometimes still part of the design of this designer breed even though its parent is usually a toy variety. Puppies tend to be bigger than their parents when they are larger, which is often true. This adorable designer breed comes in various sizes depending on the breed, which is why its size can fluctuate. 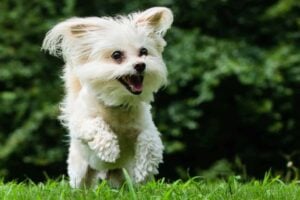 A purebred Maltese puppy bred with a purebred Poodle is considered an F1 puppy. Although they may look like one parent, these puppies inherit the personalities of their other parents. There is no guarantee that all puppies in an F1 litter will look the same. Certainly, some may, but others may look exactly like one parent and do not appear mixed.

In the F1B generation, the traits and features of the parent breed are intensified when an F1 is bred back to its parent. Breeding two F1s together results in the F2 generation. F2B puppies result from breeding an F2 with a parent breed or an F1B with an F1.

When two F2 generation dogs are bred together, F3 puppies are produced, which can be backcrossed to a parent breed to earn an F3B classification. Multigenerational is often used to refer to F3 generations and beyond. Having worked with multiple generations of Maltipoos, a breeder can more predict the puppies’ adult size. 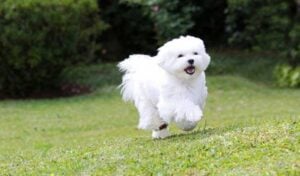 At different ages, we will reach maturity in three areas: physically, mentally, and sexually. Each of these aspects must be fully realized before a Maltipoo can be considered mature.

Many Maltipoos continue to gain fat and muscle until they reach 18 months, after which their skeletal system is complete. As soon as they have stopped growing, they should stop growing.

As a Maltipoo approaches adulthood, it gradually reaches mental maturity. Before one year, puppy-like behaviors usually begin to fade but may not subside permanently until several months later.

Dogs with poor discipline can continue to behave in puppy-like ways into adulthood, such as chewing remote controls or having accidents. Slow development isn’t indicative of the owner’s lack of training but rather slow development.

In general, small breeds mature a little faster, so Maltipoos can show sexual maturity by the time they are four months old. Males and females usually possess the ability to reproduce by six months of age. 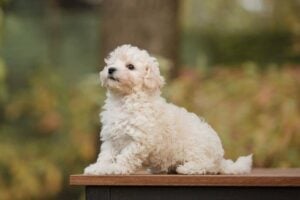 Maltese breeders use various weight limits when categorizing their Maltipoos’ size, and some breeders market their dogs as teacups, toys, or small. Often, teacups are tacked on to product descriptions as a marketing strategy, even though they can be misleading and even deceptive.

How do these terms apply to Maltipoos, and what is their true meaning?

You can understand your puppy’s adult size by examining the sire and dam of the litter you’re considering. Your new Maltipoo will be well under 20 pounds when fully grown, no matter what term the breeder chooses to use.

How to Make Sure That Your Maltipoo Grows Properly

The following steps may be taken if you believe your Maltipoo is not the right weight after consulting a weight chart or observing its physical appearance and feeling its ribs.

1. You Should Plan a Feeding Schedule

It is a common mistake for pet owners not to schedule their dog’s meals properly, which results in under- or overfeeding. So that your Maltipoo doesn’t gobble up too much food, it is important to set a schedule for when they will eat. Their bodies will adjust when you feed them at the right intervals, so they do not get hungry when it is near their mealtime.

This will result in a regularized digestive system. Your dog will remain healthy if you follow this scheduling habit. Frequently absent from home, they can rely on automatic feeders to feed their dogs at specific times throughout the day if they cannot supervise them. Some of them may even be possible to communicate with your dog using IP cameras.

2. You Should Ask Your Vet For Help With Meal Planning

Considering consulting your vet before feeding your Maltipoo to ensure that they get the right weight is a good idea if you’re not sure what to feed them. Depending on their recommendations, they may provide a balanced diet for your dog that consists of vitamins, minerals, and quality nutrients.

Some veterinarians recommend home-cooked meals and raw feeding. If that’s not possible, you can ask about commercial food suitable for your Maltipoo, formulated based on its breed size, diet plan, and health considerations.

Most pet owners and veterinarians tell you to avoid feeding your dog foods containing fillers such as corn and wheat since these ingredients aren’t easy for your dog to digest. You might consider foods with more balanced ingredients, such as chicken, lamb, venison, fish, and vegetables and fruits.

You might be able to save more money by buying commercial foods in the long run. It is possible, however, that if you feed your dog low-quality, cheap commercial foods excessively, they’ll get sick, and you’ll have to pay for more vet bills and medications.

4. You Should Make Sure Your Maltipoo Stays Active

Would your dog rather spend the day running or just lying at home? It would help if you fed your Maltipoo according to their activity level. The only way to prevent obesity in dogs is not to feed them too many calories because they won’t be active every day.

You may also find out whether your Maltipoo has a history of obesity and other weight-related problems from your breeder. Your vet is the best source of information if you do not have much detail. There are different types of metabolism in dogs, after all.

6. Add Fresh Fruits And Veggies For Your Maltipoo Companion

Your Maltipoo can maintain a healthy weight by eating certain vegetables and fruits. You can include vegetables as part of your Maltipoo’s daily meals since they are typically low in calories. In addition to providing your dog with nutrients, vitamins, and minerals, they also promote its health.

Related: How Much Does a Maltipoo Cost?

Conclusion For “When Does a Maltipoo Stop Growing”

If you’re like most Maltipoo owners, you hope that your little guy stays tiny forever.  It is unlikely that this breed will remain a puppy for very long, but it will stop growing fairly soon and remain a small breed. Approximately 6-7 months are required for Toy Poodles and Mini Poodles to reach their full growth potential.

There is a slight delay with Maltese.  It usually takes them 12-15 months to reach their full size. The average Maltipoo reaches full size in 8-10 months. Puppies bred with Miniature Poodles rather than Toy Poodles might take slightly longer to grow.

Due to their larger size and longer growing period than Toy Maltipoos, they take 10-12 months to finish growing. Keeping your dog healthy will ensure it stays on track with its growth expectations and lives a long life.

For more Maltipoo guides from our team at We Love Doodles, you can check out:

You can learn more about the sizes of a Maltipoo by watching “Everything You Need to Know About The Maltipoo” down below: