You’re probably searching for Samoyed breeders in California because you know how adorable and lovable this breed is. The dog’s smile often hooks Samoyed lovers, an upturned mouth that originated for a significant reason. The dogs, which were developed as sled dogs in the frigid Arctic country of Siberia, have that smile to prevent drooling, which would have allowed icicles to form on their lips.

It’s difficult not to grin back when presented with that sweet smile, no matter the practicality of the facial feature. There is so much more to these dogs, which bond strongly with their humans and are generally great with kids and other pets. Samoyeds are calm by nature, and with the proper training, one of these snow-white beauties may become the best dog ever to join your family. There are several respected kennels in California where you can find a show dog or loyal family fur baby with a pedigree, depending on your desire.

Samoyed Puppies For Sale in California 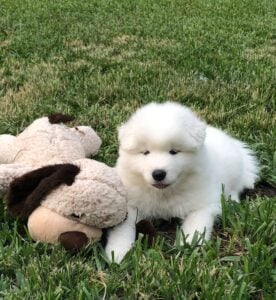 Whitecotton Samoyeds was founded in 1995 in Orange County, California, where they have raised champion show dogs who participate in a wide range of different activities that bring out the best qualities of their beautiful, ancient dogs. An AKC Breeder of Merit, Whitecotton Samoyeds focuses on producing dogs of exceptional temperament, which is one of the qualities that make Samoyeds so special. Samoyeds are playful and gentle, and those at Whitecotton work hard to make sure that the puppies that come out of their facility have the same great qualities.

They participate in many activities at the facility, including mushing, therapy – their dogs attend schools and nursing homes – and herding, which remains a natural ability for the dogs, who were originally bred to herd reindeer. The founders of Whitecotton Samoyeds are members of the Samoyed Club of America and the Samoyed Club of Orange County, and they recently celebrated some big wins for two of their beautiful Samoyeds, including Emersyn, who earned Grand Champion status, and Harry, who is now a Champion. 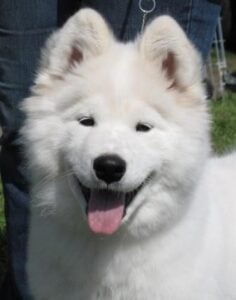 Firecloud Samoyeds was founded by Tami and Jim Lynch more than 30 years ago, and has since produced more than 40 champion dogs and many more with nearly as prestigious showings. Their dogs are carefully bred with respect to their ancient heritage and help prevent specific health problems typical for the dogs, particularly hip dysplasia and progressive retinal atrophy, an eye disease that mainly occurs in males Samoyeds.

For Jim and Tami Lynch, one of the most important missions of Firecloud is to ensure that their breeding practices maintain the Samoyed’s working heritage while maintaining the dog’s standards. Their dogs participate in conforming, herding, and obedience, which is a challenge for these willful puppies. Some of Firecloud’s dogs serve as therapy dogs, at which Samoyeds excel due to their gentle disposition, which suits children and senior citizens alike. Tami is one of the founding members of the Barbary Coast Samoyed Club, and served as president of the organization for six years.

Lake Hill Samoyeds was founded in 2004, when owner Cathy Hayes acquired her first Samoyed. Her dogs have a show kennel history, and come from champion stock. Her most recent litter was in April of 2021, but the puppies were quickly adopted. Because her dogs have such an illustrious history, Hayes’ goal is to maintain the qualities about Samoyeds that made them important parts of the Siberian experience and make them utterly irresistible today. She keeps her dogs in her home so that puppies are entirely acclimated to home life when they find their forever home, and she ensures that the puppies she adopts go to homes that understand how important it’s for them to maintain the same level of care for the newest member of their family. Lake Hill Samoyeds have placed high and won numerous shows, which absolutely should be reflected in the puppies that come from the facility. 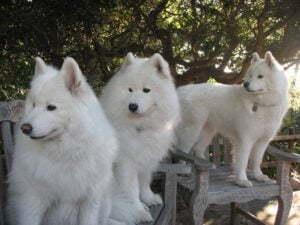 Patti and Michael Emmett have loved and worked with Samoyeds since 1979. It would be decades later before they entered the world of dog shows, when they acquired their first show dog from Firecloud Samoyeds, the Fairfield, California, facility that’s also on our list. In addition to dog shows, they also attend working events – dogs go on pack hikes, learn how to be therapy dogs for children and seniors, they get back to their working roots by sheep herding, and they work in the snow pulling heavy things, which harkens back to their sled dog days and keeps them true to their ancient roots.

While the Emmetts don’t always breed – when they breed, they do so carefully – puppies from their beautiful pack are occasionally available. If they don’t have puppies, they’re happy to refer you to nearby kennels that do have Samoyed puppies available for adoption. They are also interested in placing adult dogs, and can refer potential adopters to nearby rescues. Patti and Michael Emmett are members of numerous groups including the American Kennel Club, the Samoyed Club of America, and the Barbary Coast Samoyed Club.

Conclusion For The “Best Samoyed Breeders in the California”

Samoyeds are a great dog for the right person. They are gentle, loyal, and enjoy being part of the family. With the right care and training, they can easily become therapy dogs, show dogs, or amazing family dogs. The choice is yours.

We have other guides with mentions of the Samoyed dog breed that you can check out:

If you’re interested in bringing home a companion from our list of Samoyed breeders in California, watch “The Samoyed Dog” from Animal Watch to learn more: