Sammypoo’s are a medium to large dog breed that is a mix between a Samoyed and Poodle.  This is an extremely fluffy haired dog breed that is easy to train, loyal, and fun loving dogs.  This Samoyed Poodle mix has been increasing in popularity due to the hypoallergenic features and ability to always “smile” and look happy.  You’ll almost always see this dog with their tongue out and a smile on their face due to their loving personality. The problem with Samoyed dogs was that they shed a lot of hair everywhere around the house and on your clothes.  Breeding a Poodle and Samoyed dog together to create the Sammypoo eliminates a lot of the shedding issues because the Poodle doesn’t shed hair.

If you’re interested in getting a Sammypoo, you’ll need to make sure that you can care for both the Samoyed and Poodle personalities.  Since the Sammypoo is not a purebred dog, they can range in a variety of genetics that is inherited from both the Samoyed and Poodle breeds.  Sammypoo’s have a high level of intelligence and relatively high levels of energy so it is critical you understand every aspect of this breed before purchasing. 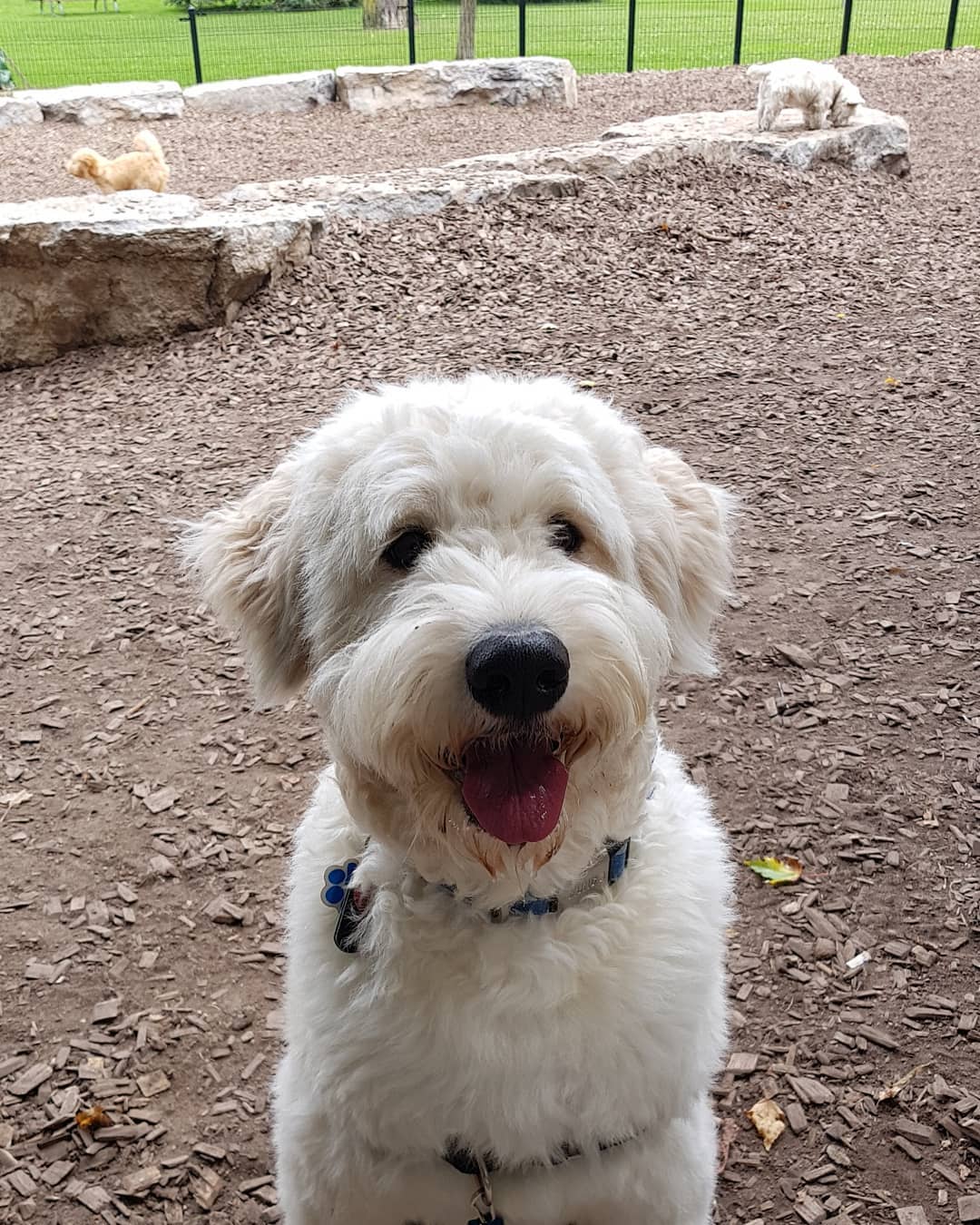 Sammypoo’s have many different nicknames, but the most common names are the Samoyed Poodle mix, Samoyed Hypoallergenic, and Pamoyed.  Sammypoo’s are a giant ball of fluff created from breeding the Samoyed and Poodle together.

When you first think of the Sammypoo, mixing the Samoyed and Poodle together doesn’t make much sense since they came from different climate types and have different personalities.  However, the Samoyed Poodle mix brings the best genetic traits together to create a hypoallergenic Samoyed with low shedding, low drooling, and easy to train features. In addition, the Sammypoo has a wonderful personality of high intelligence, family friendly, and fun.

Sammypoo’s have actually been around for quite some time as breeders have been experimenting with Samoyed’s to create an ultimate dog breed.  It’s believed that the Samoyed Poodle mix dates back approximately 30 years ago when breeders started crossing purebred dogs that carried desirable personality and genetic traits.

The Samoyed originates in the 19th century and gets its name from the people of Siberia. Originally used as a large herding dog, the Samoyed has a thick white coat that consists of two layers for additional warmth.  As the Samoyed became more popular they started being used for a variety of other purposes like hunting, guarding, and sled pulling. Pet owner’s quickly realized that the Samoyed makes a poor guard dog since their personality is way too friendly.  These dogs are extremely fluffy and appear quite large. However, Samoyed’s typically only get around 22 inches in height and weigh a maximum of around 65 pounds. Female Samoyed’s are often a lot smaller and used to breed miniature Sammypoo’s.

The Poodle is one of the most popular dogs (7th most popular breed according to AKC) in the world because they don’t shed fur and are highly intelligent.  The history of the Poodle is often widely debated on whether or not they originated from Germany or France.  However, we do know that the Poodle was used extensively for water sports, herding, and several other agility exercises.  As the Poodle became popular, they started being bred in several different sizes and colors. Since the Poodle is one of the most intelligent and high energy dogs in the world, they can virtually be used in any type of activity.  The best quality about the Poodle is that they are non shedding and hypoallergenic. Pet owners that have allergies and don’t want to vacuum hair will always prefer to get a dog with at least some Poodle genetics.

Both the Samoyed and Poodle have become extremely popular dogs which causes them to be bred in several different sizes and colors.  Today, you can find the Poodle in several standard sizes including the Toy Poodle, Miniature Poodle, and Standard Poodle. Poodles also come in several standard colors: white, black, brown, blue, gray, silver, cafe au lait, silver beige, cream, apricot, and red.  As you can imagine, the Sammypoo will have several different sizes and color variants depending on the Poodle breed.

The Sammypoo most commonly appears in a white coat color, but they can be a variation of colors including muli-color.  Since Poodles come in 11 standard colors, it’s impossible to determine what color the Poodle Samoyed mix will be because it’s difficult to predict dominant and recessive genes.  You can typically get a good understanding of what color your Sammypoo will be based on the colors of the parent Samoyed and parent Poodle. However, Samoyed Poodle mixes can turn out to be multi-color or a coat color that neither parent had.  However, most Sammypoos are usually white since the Samoyed color is relatively the same. Most breeders will breed the Samoyed with a lighter colored Poodle white makes white the common color for Sammypoos. The Samoyed Poodle mix typically comes in two different sizes which is the mini Sammypoo and standard Sammypoo.

The standard Sammypoo is usually a dog that weighs over 30 pounds.  The most common weight for a Poodle Samoyed mix would be around 50 to 60 pounds and about 21 inches in height.  The weight and size can often vary a lot because this isn’t a purebred dog. The larger the Sammypoo gets, the more exercise that they will need.

The Sammypoo has a non-aggressive temperament that makes for the perfect household pet.  This Poodle Samoyed mix is always happy, easy to train, and good with kids. With proper socialization, the Sammypoo will also be great with any type of strangers.  On the downside, Sammypoos require a lot of attention in terms of physical activity as well as mental stimulation. You’ll have to regularly exercise your dog and constantly keep their mind occupied like giving them a horn to chew on.  They enjoy constantly being pet, walking around, and keeping busy.  Without proper exercise and training, this Samoyed Poodle mix can be destructive and mischievous.  Overall, this hypoallergenic Samoyed is the perfect family dog.

Is a Sammypoo the Right Dog for Me?

If you aren’t worried about having the perfect purebred dog, then the Sammypoo is a great candidate for you.  The Samoyed Poodle mix has great personal and physical characteristics that would make it superior to most other dog breeds.  They are fluffy, affectionate, intelligent, and great with families.

In addition, the Poodle genetics provide the Sammypoo with hypoallergenic and non shedding features.  The main problem with the Sammypoo is that they shed tons of hair all around the house, car, or on your clothes.  Crossbreeding the Samoyed and Poodle together should help to severely limit the amount of hair that the Sammypoo sheds.  In addition, if you suffer from various types of pet allergies the Samoyed Poodle mix is a great type of dog to consider since both breeds are considered hypoallergenic.  On the downside, you’re likely going to have to regularly groom your Sammypoo which includes regular types of dog haircuts and daily brushing.

Both the Poodle and Samoyed are also considered healthy dog breeds that should have a lifespan of 10+ years.  The benefit of getting a non-purebred dog like the Sammypoo is that it inherits genetic traits called Hybrid Vigor.  This means that the Samoyed Poodle mix has superior genetic qualities than either a purebred Samoyed or a purebred Poodle.  This is because Hybrid Vigor masks various underlying health issues that you see in purebred dogs.

At the end of the day, only you can choose whether or not the Sammypoo is going to be the right dog for you.  This Samoyed Poodle mix is surging in popularity for good reasons: they are mostly non-shedding, hypoallergenic, always happy, and loving.  The combination of good physical and personality traits make this dog special. Lastly, if you have a family, this Poodle Samoyed mix is a good option for you.

What do you call a Samoyed Poodle mix?

The most common nickname is the Sammypoo.  However, they are also referred to as the Poodle Samoyed mix, Samoyed Hypoallergenic, and Pamoyed.  This relatively new dog breed is trending and becoming popular amongst breeders.

The most common Sammypoo mix is white.  However, since the Poodle comes in 11 different colors the Sammypoo can come in several different combinations including black, multi-color, off white, etc.