While it was initially bred for tracking and baying animals like lions, bears, and boars in the wild, they now enjoy a more independent lifestyle—one that allows these fast and powerful athletes to live life king size.

The breed’s hallmark is the “ridge” —a stripe of hair growing in the opposite direction to the rest of its hair—on its back and imposing stature. They weigh anywhere between 70 to 85 pounds and come in only one color—wheaten.

They sport one of the two nose colors characteristic of their make—black and brown. Despite years of domestication, the Rhodesian Ridgeback has still managed to retain its strong prey drive and strong-willed nature.

While they certainly make faithful friends, show excellent compatibility with young children, and make fierce family guardians, this independent breed requires a lot of training to become calm and quiet.

Rhodesian Ridgebacks Puppies For Sale in the United Kingdom

Colkeririn Rhodesian Ridgebacks strive to give their puppies the best start in life they can afford. This is why they only breed their dogs when they’re ready to add another puppy to their caring home.

They have interested puppy owners fill out a questionnaire before visiting their home to ensure compatibility and endorse their puppies as “progeny, not for registration” and “not for export.”

All their puppies are registered with The Kennel Club, UK, wormed, microchipped, and inspected by at least two independent Rhodesian Ridgeback breeders and veterinary surgeons before they’re sent to their new homes with 4-weeks insurance.

New owners are also given puppy food, a goody bag full of information on care and maintenance, and a piece of bedding full of familiar smells that will help the puppies settle in their new homes without much fuss.

They’re also appropriately socialized to help them ease into the new family and grow up to be well-mannered and valued family members.

Kazembe Rhodesian Ridgeback breeders breed excellent temperament, health, and quality dogs. Their parent dogs are frequently tested and bred only when the circumstances are right.

The litters are infrequent and few and far between. So, if you’re interested in purchasing one of their puppies, contact them as soon as possible to be included in the waiting list.

Prospective owners should preferably own (or have owned) a Ridgeback, should be willing to educate themselves about this breed and should have ideally read The Imbali Way of Raising and Training your Ridgeback Puppy.

The owners consider the puppies lifelong members of their family and are willing to guide and help puppies as and when required—anything that gives them a better quality of life.

Kiromol Ridgebacks are bred for type and temperament. They’re also “Fit for Function” and have gone ahead to win many competitions.

As the parent dogs’ qualities, behavior, and temperament drizzle down to their offspring, the breeders carefully select the right stud to complement the dogs. They only choose dogs with sound conformation, ones that excel in free movements and have the soundest of temperaments.

Should you wish to own a Kiromol Ridgeback puppy, you must familiarize yourself with the characteristics of this breed and find out if the breed will suit your family and living conditions.

Their puppies are advertised as “progeny not eligible for registration,” but if you want to breed them at any point, you must discuss the matter with the breeder to lift the endorsement. 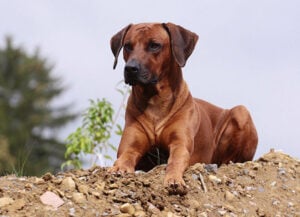 One of the UK’s top kennels, Gunthwaite & Burncoat Rhodesian Ridgebacks, is backed by over 50 years of experience both in breeding and showing.

They selectively line breed their litters for optimal quality, type, temperament, and soundness to maintain breed characteristics. To enhance the quality of their hounds, they also import new bloodlines from kennels in Australia and Finland.

In addition to standard health tests, the breeders also test their dogs for Juvenile Myoclonic Epilepsy (JME) to ensure optimal health and breed maintenance. Their puppies are true to type and exhibit wonderful temperaments.

They prioritize prospective puppy owners who can give their puppies the attention they need to thrive. Overseas prospects who must buy puppies unseen are given all the help and assistance required to raise a Ridgeback.

Specializing in Rhodesian Ridgebacks and Pointers, the Sonstraal breeders have bred many United Kingdom champions over the years.

They import their dogs from selected bloodlines across the globe to maintain genetic diversity. Their dogs and litters are well known for their sound temperaments and correct movement and are thoroughly health tested to ensure optimal health standards.

The puppies are sold with a contract and a puppy pack to quickly help new pet parents ease into their roles. Their puppies are also microchipped and come with 4-weeks insurance and pedigrees, which will be endorsed to protect both the puppy and the breed.

They breed dogs only when they intend to keep a puppy, so if you’re interested in purchasing a Sonstraal puppy, contact them to be put on the waiting list.

The parent dogs are frequently tested to maintain breed standards and avoid any unpleasant hand-me-down characteristics that can be passed on to the litter. If you’re interested in purchasing one of their gorgeous hounds, you can contact them via call, email, or text to be considered.

Diamonridge Breeders breed lovely ridgebacks for the show, but they sometimes have ridgebacks that will make great pets for family homes. They aim to breed dogs that are sound in mind and body.

They are Kennel Club Accredited Breeders and adhere to Kennel Club’s recommendations. Their puppies stay with their mother until they are at least seven weeks old, after which the puppies are only frequented by the mama dog, who teaches them their manners.

Their puppies are checked for physical defects and dermoid sinus before they’re sold. Then, they come to you dewormed, with an information pack and diet sheet.

They only breed when they want to add another member to their Ridgeback family, so if you’re interested in purchasing a puppy from them, you must make yourself known as a prospect early on.

Their puppies are health tested, microchipped, go through an early neurological stimulation test, and socialized appropriately to make them great family dogs.

Once sold, they’re sent to their new homes with a puppy pack that contains two weeks of food, a blanket with their mum’s scent to make easing into a new surrounding easy, and endorsements on their registration documents.

But with proper and persistent training with a firm and fair hand and loads of positive motivation, you can tame their domineering nature. It would be wise to remember, however, that this intelligent breed is not for everyone.

To become loyal, lifelong companions, they require a pet parent who can consistently indulge them in training and exercise. If you’re someone who cannot allocate your time and resources toward training them, they may not be the best match for you.

Conclusion For The “Best Rhodesian Ridgeback Breeders in the UK”

Rhodesian Ridgebacks can make for great house dogs with proper training. They exhibit unwavering loyalty and dedication to their human families and are generally “people” dogs who’ll follow you around on your morning jogs.

If you’re someone who has an active lifestyle and has time to spare, consider bringing a puppy home from any of the breeders listed above.

The best Rhodesian Ridgeback Breeders UK offers to take extreme care and caution to keep their puppies healthy, make sure they’re free of genetic diseases, and constantly groom them to keep them in their prime.

By linking with these breeders, you can rest easy knowing you won’t be contributing to the puppy mill industry. Isn’t that what every pet lover wants to achieve at the end of the day?

For more guides similar to this list of Rhodesian Ridgeback breeders in the UK, you can check out: