Here’s a question we have for you if you’re searching for F1Bb Labradoodle breeders. Have you ever seen an F1b Labradoodle for sale or adoption and wondered what the extra letters mean?

In F1b Labradoodles, a purebred Poodle is crossed with a first-generation Labradoodle. These dogs look and act more like Poodles than Labradors on average.

Physical and temperament differences between purebred Labs and F1b Labradoodles are more apparent when using Miniature Poodles than Standard Poodles.

Labradoodle Puppies For Sale in the United States

The best route to puppy satisfaction is to choose an F1b Labradoodle puppy from health-tested parents who you like. Keep reading to learn more about the top F1b Labradoodle breeders in the country.

All F1b Labradoodle breeders with puppies on PuppySpot are strictly screened, so you can rest assured knowing that your companion will be safely shipped to your home anywhere in the United States. Before you continue on your search for an F1b Labradoodle puppy for sale, check out the link to the marketplace below. 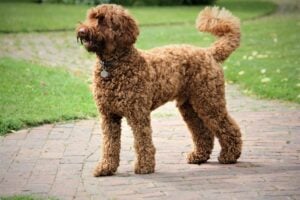 After studying this breed, they developed a great love for the Labradoodle. As a result, they decided to switch from breeding Labs to breeding Labradoodles exclusively. Their first pairing resulted in chocolate-colored standard Labradoodle puppies.

Afterward, they decided to try breeding small F1 and F1B Labradoodles. This led to their miniature Poodle, Gus. Having him bred with their labs led to a litter of medium Labradoodle puppies that weighed from 30 to 45 pounds.

They love big dogs but were more satisfied with the medium Labradoodle puppies since they found them more suited to living inside the home. In addition, the Labradoodle has a low to no shed coat, contributing to a cleaner home.

At Brown’sBrown’s Labradoodles, proper nutrition is essential for adult dogs and puppies. In addition, in determining whether a dog is suitable for breeding, genetic testing, OFA, PENN hip certification, and temperament are all very important.

Taking proper care of the dog and paying attention to it are equally essential. Dogs require attention and time. As a result, they place their breeding dogs in Guardian homes. Using this method, their dogs are not kept in kennels but are placed in homes where they receive their time and attention.

Since 2003, Doodle Dog Pups has been breeding Goldendoodles and Labradoodles. Despite breeding a few litters over the past few years, they are fortunate to receive repeat customers and referrals. Doodles are their favorite.

Any Doodle. Families love these crosses because they are intelligent, gentle, and devoted to children. These dogs were not raised in kennels; they were raised in family homes with children and other pets. This breeder truly enjoys providing great family pets for loving families.

Located in the stunning state of Washington, in the SW region of the Pacific Northwest and the Cascade mountain range, ForeverGreen Farm is a family-run farm. Mt. St. Helens is visible from their 60-acre farm.

After years of working outside the home, they became passionate about the animals they raise and care for at their farm. Aside from their dogs, they also have eight chickens, two sheep, one goat, and four highly prized horses.

It’s never dull around here. Only F1b, F2, and multigeneration Labradoodles are bred and raised there. The owners pride themselves on fantastic care and hold themselves to high standards with each puppy.

They work hard to meet those standards by performing health tests and obtaining certificates on their Doodles, performing puppy vet exams, providing hands-on love, and keeping a limited breeding schedule.

In the Pacific Northwest, Dreamydoodles is a reputable and professional breeder of Labradoodles and Ausiedoodles. They have bred the same Doodle bloodline for over a decade now. All their parents are healthy, happy, and thoroughly tested.

All of their puppies are covered by a two-year genetic health guarantee, and you can return them within seven days. So it’s safe to say their puppies are among the best Labradoodles and Aussiedoodles available in the country.

Their puppies are from a long line of exceptional genetics, non-shedding coats, and robust and proportional bone structures. Their doodles are not only beautiful to look at, but they also have friendly temperaments and intelligent minds. 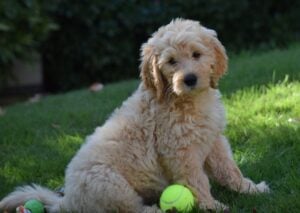 Crockett Doodles specializes in F1b Doodles, first-generation dogs bred with standard poodles. People who have allergies to dogs will generally benefit from their non-shedding coats. Although they cannot guarantee that their dogs will be 100% allergy-free, they can confidently report that it will be less likely to affect allergy sufferers.

It took the owners quite a while to type in the names of 400 people who’d asked to be on the waiting list when their Goldendoodle had her first litter. There was no way they could meet the demand for home-raised puppies from a quality breeder.

Instead of opening their kennel, they became partner homes with friends. In addition to offering the stud poodle, the Crocketts bought Goldendoodle puppies for friends and sent them to extraordinary forever homes.

It was a great way to have actual family-raised puppies yet provide more than one litter per year. During the second year, chocolate Labradoodles were added. Crockett Doodles has gained a reputation as a premier breeder of Goldendoodles and Labradoodles over the past several years.

With its gorgeous Labradoodle puppies, the Doodles Sanctuary has brought happiness to so many families. A wonderful place full of love and fluffy Labradoodle puppies in Hernando, Florida, just north of Inverness and close to Ocala, Florida.

All Labradoodle puppies are socialized with children in their homes. A new dog will even have been litter trained, which is a big step towards housetraining.

Your puppy will come with a Florida Certified Health Certificate, a blanket with the scent of mom and siblings, collar, leash, puppy food starter kit, as well as shots. Look at Google Reviews and see why this is one of Florida’sFlorida’s most popular Labradoodles.

F1B Labradoodles are the offspring of a Labradoodle and a Standard Poodle. Therefore, their non-shedding coat comes from the Poodle parent, inheriting more desirable traits. These dogs are not guaranteed to be completely non-shedding, however.

Their goal is to raise high-quality Labradoodles. A large portion of the litter consists of puppies from show-quality dogs. Each dog’s health has been examined and documented. Their parents were tested for hips, elbows, and the prcd mutation for PRA as well.

Their Labradoodles will all be medium-sized. Online applications can be filled out to wait for a puppy. As well as your personal information, you will be asked about your experience owning dogs. Each Labradoodle puppy costs $1,500. 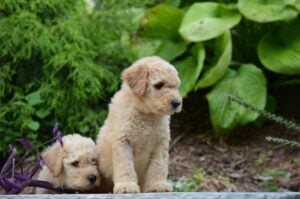 A Labradoodle of an F1b generation can also have very Labrador- or Poodle-like personalities. However, for standard Labradoodles, this might not be much of a flaw. A Labrador and a Poodle were originally gundogs, and both breeds are active, clever, friendly, open to meeting new people, and responsive to training.

However, the Poodle is slightly less inclined to socialize with other dogs and somewhat more prone to display guard dog behaviors (for example, barking at visitors and passersby). Nevertheless, Miniature Poodles are very different in temperament from Labradors and Standard Poodles in many ways.

Their main personality characteristics include:

In other words, creating an F1b generation of Mini Labradoodle puppies increases the chance of getting dogs with these traits. A good breeder will carefully choose their breeding dogs and be truthful about their puppies’ sire and dam’s temperaments to avoid breeding problem dogs.

Related: What is an English Labradoodle and What is the Micro Labradoodle?

How to Choose an F1b Labradoodle Breeder 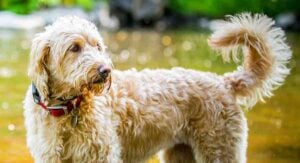 Finding a responsible, reputable breeder is essential when buying a puppy. Unfortunately, many unscrupulous breeders jump on the Labradoodle bandwagon when a new hybrid breed like this becomes popular. Responsible breeders have decades of experience, test their breeding dogs for health, and raise their puppies with utmost care.

Where Do You Find an F1b Labradoodle Breeder? 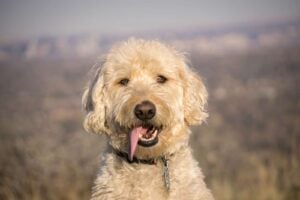 F1b Labradoodles and other designer dogs are often victims of their success for breeding. For example, hereditary diseases are commonly found in puppies raised on puppy farms, which could have been prevented with genetic testing.

In addition, they may also come home infected with parasites and may display behavioral problems due to not being socialized by the breeder or having been sold too young. Look for a breeder recommended by a friend or references from previous puppy buyers.

Conclusion For The “Best F1b Labradoodle Breeders in the USA.”

Labradoodles make excellent family, service, and therapy dogs. However, it is best to get a puppy from a reputable breeder who strives for healthy and amazing puppies.

For more guides similar to this list of F1b Labradoodle breeders in the United States, you can check out:

Before you purchase an F1b Labradoodle from a breeder, you can learn more about the breed by watching “What’s The Difference in Labradoodle Generations” down below: