The Cavalier King Charles Spaniel has big ears and even bigger personalities for their small size. They’re awesome pets that are great with children and other dogs when they are properly socialized. They can hear from a mile away and will remind you of a puppy even when they’re all grown up. You can definitely expect some barking.

Golden Retrievers are another great dog breed, both in terms of popularity and family-friendliness. Golden Retrievers bred with Poodles make unparalleled companions for families and almost all households. They get their energy from the Poodle side and their more relaxed easygoing personality from the Golden Retriever. At this point, the Goldendoodle is basically a household name as they are one of the most popular crossbreed dogs in the world.

Here’s a quick summary of the Cavapoo vs Goldendoodle. Please read more in-depth details below.

Other articles you will like: Best Puppy Food for a Goldendoodle and Cavapoo Rescues for Adoption.

What is the Goldendoodle? 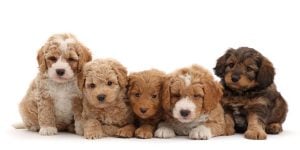 Goldendoodles are blends of Poodles and Golden Retrievers but are distinctly their own hybrid breed. Their silky fur can’t be compared to any other breed, and they inherit superior genetic qualities from both parent dogs. They typically look like teddy bears with their nonshedding and hypoallergenic coats.

Their silky fur and lovable personalities have made them a widely-known and lovable breed for decades. When bred with a  Standard Poodle, the result is a tall but lanky Goldendoodle that just wants to please and spend time with their owners.

This classic crossbreed dog already has classification in several organizations after being bred for utility and as a companion pet. The Goldendoodle makes every home or condo seem perfect for a dog, even if its inhabitants are allergic to dander. They come in multiple sizes and coat colors!

Cavalier Saint Charles Spaniels are small dogs that pack a punch in terms of vocalness and energy. They’re surprisingly good at fetching and come with tons of energy for such a small dog. In addition, they’re also loyal and eventually settle into a much more “couch potato” rhythm as they age.

The Cavapoo is energetic for a small dog because they come from two working dog breeds. They perform basic commands with ease and get their high intelligence from the Poodle. If you’re looking for a dog without as much intelligence or one that can be left alone often, this may not be the choice for you.

With the right amount of attention and physical exercise, this is a perfect breed for the whole family. It’s one of the smallest hybrids Doodle breeds meaning you can still have the benefits of a small dog with Poodle characteristics.

Cavapoo vs Goldendoodle Size: Which is Bigger?

Cavapoo dogs have a short overall stature and only stand 9 to 14 inches. This large gap means that they truly depend on the genetic traits they receive from each side of their mix. In general, if they inherit more Poodle genetics, they will stand taller which is why there is such a wide variation of heights. They also have a large weight range of between 9 and 25 pounds in adulthood, a reflection of the vast differences between the parent breeds.

Goldendoodles are much larger animals with an average height of 20 – 26 inches. Their average weight is also much bigger at 30-45 pounds, assuming they don’t have any weight problems. This cross-breed looks even bigger because of their hair, which can be long and fluffy depending on the hairstyle. Since Goldendoodles are such a popular dog breed though, there are three standard sizes:

In terms of size, a Cavapoo will be similar in size to a miniature Goldendoodle. However, a medium and standard Goldendoodle will be much bigger than a Cavapoo.

The Goldendoodle has tons of energy which is illustrated by their willingness to go on runs and walks. If they aren’t properly exercised then they will potentially wreak havoc if they’re not walked regularly. However, Goldendoodles are friendly and confident meaning that no dogs or humans in the park will be off-limits. Also, this breed is very smart and can become needy if they don’t feel properly engaged mentally.

Cavapoos, also known as a Cavoodle, are slightly less energetic, preferring the couch potato life to running around excessively. However, as puppies, they may have a ton of energy and should calm down as they age. They’re even more attached to one or two of their most beloved humans and show their affectionate side with cuddles and snuggles. Lastly, the Cavapoo is very sociable with other dogs and is most happy in a house with other pet friends. When socialized, they get along well with children, strangers, and almost all humans. 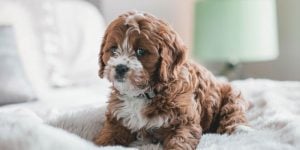 The Cavapoo, a blend of Cavalier Spaniels and Miniature Poodles, will live about 12-15+ years on average. They live longer than most other hybrids and Doodles, and benefit from longevity from both sides of the genetic makeup of this hybrid.

On the other hand, the Goldendoodle has a wider average lifespan of between 10 and 15 years. They can live more than 15 years, but also have a larger variability due to Golden Retrievers’ shorter lifespan of 10-12 years. Typically, mini Goldendoodles will live a lot longer than standard Goldendoodles.

Goldendoodles suffer from Hip Dysplasia at high rates, which can cause slipping joints that worsen over time. In addition, Goldendoodles can suffer from a specific heart disorder, Subvalvular Aortic Stenosis, which can also cause problems later in life for these pups. Lastly, their eyesight may be impaired by cataracts that cloud their vision and tinge their eyes a cloudy blue.

Cavapoos have heart issues, as well, specifically mitral valve disease. In addition to cardiovascular issues, these dogs can suffer from brain-related diseases like cerebellar biotrophy, which is a very serious ailment. Their joints are prone to dislocation and slipping, especially in the kneecap and the hip.

However, we will say that crossbreed dogs are generally very healthy due to a genetic trait called hybrid vigor. This means that they will usually be healthier than any of their purebred parent dogs. This is because purebred dogs breeds with the same bloodlines and continually pass down genetic diseases. By crossbreeding to a Cavapoo or Goldendoodle, you mix genetic traits and prevent genetic diseases unless both parents are carriers.

Cavapoos have floppy ears like the Cavalier Spaniel, but thanks to the Poodle genes they’re much larger and have beautiful wavy or curly coats. The coloration can differ from pup to pup and litter to litter, however they tend to be brown or golden, apricot, or red with white on the chest. Their face definitely favors the Cavalier side, with a shorter snout and floppy ears.

Goldendoodles are bigger than Cavapoos in every way: height, weight, and limb length. Their legs are very long, perfect for running around and fetching. Goldendoodles have shorter ears and a shorter snout than Cavapoos. Also, these hybrids tend to have a steadier coloration with less variation from dog to dog. Goldendoodles come in several colors including golden, apricot, red, cream, chocolate, and parti. 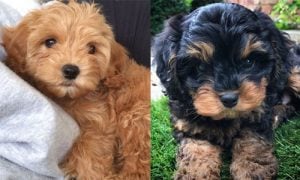 The Cavapoo needs grooming on a regular basis, usually haircuts every other month, in order to avoid excessively long and tangled hair. Just like the Cavapoo, the Goldendoodle can’t go without haircuts for any significant amount of time. Remember, these dogs typically don’t shed so you will have to groom them often.

As friendly dogs, they’re usually well-behaved at the groomer and can be trained to endure grooming for long periods of time. Both the Cavapoo and Goldendoodle can also be groomed at home, as long as you possess the exact tools and skills needed for this delicate process. 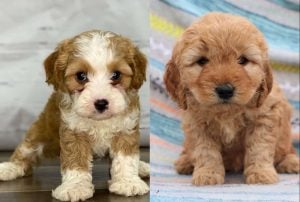 Goldendoodles are extremely smart and easy to train with basic commands and even advanced tasks. This quality of intelligence is a product of both the Poodle as well as the Golden heritage of the breed. These two purebred dogs train well and will learn almost any command if you take the time to teach them. It’s worthwhile to train your Goldendoodle because they can listen to you in emergency situations.

Training is also necessary for the Cavapoo, although they’re not quite as intelligent as the Goldendoodle. Cavalier Spaniels are known as only moderately intelligent, which means they can learn to follow basic commands. The Cavapoo is semi-smart and can definitely be potty trained and taught to sit and stay, although more advanced commands are tougher.

The Cavapoo is a moderately expensive dog to look after, with certain requirements related to grooming and haircuts. Also, this breed is prone to health risks, but there’s no guarantee your Cavapoo will suffer from any of these ailments. General veterinarian care and regular grooming are the most likely expenses for owners to incur.

The Goldendoodle requires regular grooming to take care of their unique fur coat. They also need vet care that can be expensive due to the health risks from both breeds in their lineage. Lastly, Goldendoodles are large breeds, which makes their care more expensive overall.

The Cavapoo and Goldendoodle will also cost between $2,000 and $4,000 to initially purchase. I would plan on spending an average of $1,000 per year to maintain your dog with food, toys, veterinarian costs, and general living.

Conclusion for Cavapoo or Goldendoodle

The Goldendoodle or Cavpoo will make great family dogs. However, there are several differences between the two dog breeds – most notably size. Cavapoos are going to be a lot smaller than the average size Goldendoodle. Thus, since they are smaller dogs they will typically live longer. Moreover, the Goldendoodle comes in a variety of coat colors but the Cavapoo is typically a bi-color coat. We hope that you learned something today! Will you choose the Cavapoo or Goldendoodle?