You can also read our full Goldendoodle Guide to learn more about this breed. In addition, we created a video for you on all the different types of Goldendoodle sizes. Watch it below!

If you’re looking to purchase a Goldendoodle puppy, we highly recommend that you check out Premier Pups or PuppySpot. Both are reputable breeders that can deliver all around the United States. 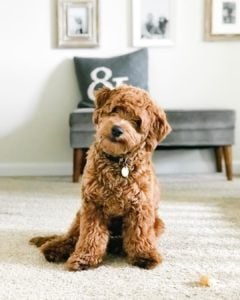 These adorable furballs can be the perfect decision for individuals who live in smaller living spaces such as a condo, apartment, or RV.  Generally speaking, the smaller the dog is the less exercise they will need.  Don’t get me wrong, Goldendoodles are a very active dog breed and will still need lots of exercise outside, but the living space doesn’t need to be as big.

Within the mini Goldendoodle size bracket, there are two “smaller” versions that are becoming extremely popular.  These two sizes are called the Teacup Goldendoodle and Toy Goldendoodle. 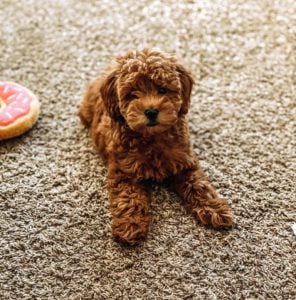 Teacup Goldendoodles can be held in one hand or under one arm.  They are becoming more common, but there are some genetic downsides of a Teacup Goldendoodle.  Since this Goldendoodle size is extremely small, they do suffer from more genetic defects like hypoglycemia, patella luxation, heart defects, and many more issues.  Basically, a Teacup Goldendoodle is originally bred from a Toy Poodle and small Golden Retriever.  The runt is then selected and bred with other runts to create this tiny dog. 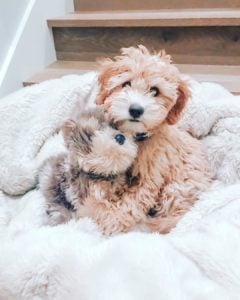 People that live in smaller living spaces like an RV or apartment would be able to accommodate a Toy Goldendoodle pretty easily assuming you are able to walk a dog outside.  This small size of Goldendoodle is great because you’ll still be able to pick them up, and they won’t get extremely big. 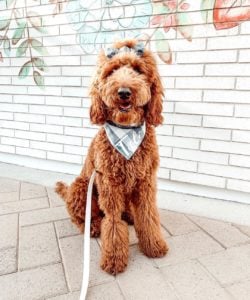 Medium Goldendoodles are small enough that they are easy to control, and great partners to exercise with. However, they aren’t too big that people will be scared of the size of your dog and the medium-sized Goldendoodle could even work if you live in an apartment or condo.  The medium Goldendoodle is also one of the more common sizes amongst breeders so you won’t be paying an arm and a leg for your dog. 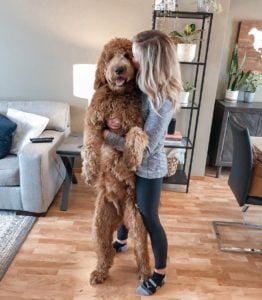 How big will a Goldendoodle get?

What size Goldendoodle should I get? 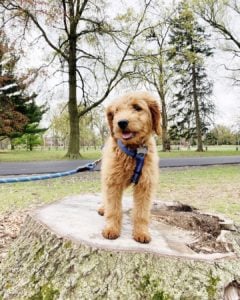 In general, you should realistically evaluate how much space you have for a dog.  Also, you should gauge the type of lifestyle that you live.  In general, Goldendoodles are a very active dog breed since they come from a working dog background.  If you own or rent a house with a large yard, you can likely get a standard Goldendoodle size. However, if you live in a small apartment or condo, the largest-sized Goldendoodle that you should get would be a mini Goldendoodle.

What is the average size of a Goldendoodle?

What is a Goldendoodle’s full size?

A Goldendoodle is generally 95% of its full size by around months 10 to 11. After that, these dogs grow exponentially fast, and they will reach approximately 50% of their size by month 3.  A Goldendoodle’s full size can be gauged based on the weight of the parent dogs.

Can you get smaller than a Teacup Goldendoodle?

I wouldn’t go smaller than a Teacup Goldendoodle because of the significant health issues of the Teacup size.  While it’s certainly possible to repeatedly breed the runts of each litter together to get smaller dogs, it’s not recommended.
Want to learn more information about the “Which Goldendoodle Size”, then check out the video below: