These adorable puppies can make incredible companions, whether you call them Newfypoos or Newfiedoodles. The affectionate and playful Newfydoodle is an increasingly popular breed, especially among families.

Before your family settles on a Newfypoo, you probably have some key questions to help you determine if they are a good fit for your household.

When is a Newfiedoodle full grown? How big will they be when my Newfydoodle is full-grown? At what age will they stop growing? Read on to learn everything you need to know about the Newfydoodle full-grown sizes.

Before you continue down this guide “When is a Newfiedoodle Full Grown,” check out these other guides with mentions of the Newfypoo: Best Giant Doodle Breeders and Best Large Doodle Breeds.

What Age Are Newfypoos Fully Grown?

Before talking about sizes and weights, it helps to know at what age Newfypoos reach their full growth potential. Think about it. You bring home a tiny, clumsy furball who can’t get far without tripping over its own feet.

Then all of a sudden, you notice that the furball is twice the size, and you don’t know how (or when) it happened. This is because dogs grow at different rates, depending heavily on their size. Smaller dogs typically reach full size by 12 months, while larger breeds take 18 months.

Of course, some dogs keep growing until their second birthday. Deciphering when your Newfypoo puppy will stop growing depends heavily on their size, but you can get a pretty good idea by the time they are six months old. Most dogs reach at least half their expected size by six months, and then the growth tapers off a bit.

Let’s talk about Newfypoo sizing and what the different names mean. Typically, dogs are classified by weight, but some people like to know what to expect with height.

Weight is easy to measure with a scale unless your puppy doesn’t sit still. Based on weight, dogs fall into one of three categories:

Of course, some people use additional categories, but these are the three most common weight categories.

Figuring out how tall a dog is can be more challenging, especially for active breeds. You might need somebody to help you keep your pet still enough to get a measurement. However, knowing a dog’s height enables you to figure out a proper kennel size, among other things.

To determine your dog’s height:

What to Expect With a Newfypoo

So, how big do Newfiedoodles get? It depends. You can typically find standard and mini Newfypoos, though miniature is a misnomer when it comes to this particular breed.

There is some variation depending on which parent is the Poodle and the Newfoundland, given that males tend to be larger than females.

How Big Do Mini Newfiedoodles Get Compared to Standard Newfypoos? 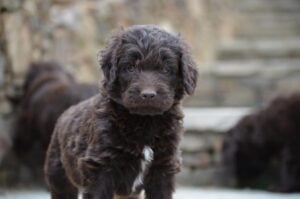 Remember that Standard Newfiedoodles come from two larger breeds, so a Mini version is not the same as miniatures of other breeds. Also, mini Newfypoos are closer to medium-sized dogs, so don’t expect to fit one in your purse.

Typically, “mini” Newfypoos end up around 18 to 21 inches tall and weigh in at 35 to 65 pounds. It’s a wide range because the breed is relatively new and not yet standardized.

In comparison, Standard Newfypoos are undeniably large dogs. Even if a puppy favors the Poodle parent more, they can reach up to 28 inches tall and tip the scales at 80 to 130 pounds.

It’s important to understand that a so-called “teacup” Newfiedoodle does not exist. Even though breeders have attempted to create “teacup” versions of most breeds, it’s often seen as unethical, especially with larger dogs, like Newfeypoos.

Attempting to create “teacup” versions typically involves pairing the litter’s smallest dogs to make even tinier puppies. This approach doesn’t always work, and with it does, it often results in health issues, including heart defects.

If you encounter any breeders attempting to sell “toy” or “teacup” Newfiedoodles, it’s best to move on to a different source. Either they aren’t completely honest about the puppy’s pedigree, the dogs are unhealthy, or the breeder did something unethical to achieve the “toy” size.

The Generation Effect on Newfiedoodle Size

Genetics plays a huge role in determining a dog’s size. The generational effect can have a more significant impact on mixed breeds than pure breeds. Let’s see if we can simplify things a little.

Breeders pair one Poodle parent with one Newfoundland parent to create a Newfypoo. Basic genetics tells us that the puppy is half of each parent and a first-generation Newfiedoodle. You get a large, fluffy, affectionate dog.

Beyond those pairings, things get muddier. When you start mixing and matching generations or pairing the first generation with a purebred Poodle or Newfoundland, all bets are off, and ratios get messy.

For example, if you pair a first-generation Newfiedoodle with a pure Poodle, the puppies would still be Newfoundland and Poodle mixes, but they would have more Poodle genes. You would likely get a slightly smaller dog with more Poodle characteristics because it would be 75% Poodle and only 25% Newfoundland.

That said, genetics are curious factors, and even if you use a purebred Poodle parent with a purebred Newfoundland parent, you can’t control which characteristics the puppies take on. Just like human kids, puppies can favor one parent over the other. 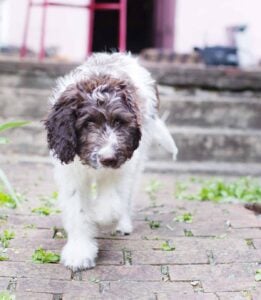 You might hear many comments about ear size and paw size, but they are not reliable indicators of a puppy’s adult size. Scientists discovered years ago that dog size relates to a particular gene, explaining why Newfiedoodles take after their parents.

Knowing something about your furry companion’s parents can provide insight into how big your puppy will end up. While there are exceptions to every rule, typically, you can expect a standard Poodle and Newfoundland to produce a large Newfypoo.

Several factors can impact a dog’s size, including gender, diet, and health issues during the puppy years.

Finally, puppies must have dog food made for younger dogs. A nutrient-insufficient diet can impact more than a puppy’s health. It can keep them from reaching their full growth potential.

It’s important to note that many puppy growth charts and weight prediction calculators exclude crossbreeds, like Newfiedoodles. Some smaller custom sites by breeders might offer guidance based on experience, but it’s always an estimate.

If you get your puppy from a breeder, you should get information from the parents. With that information, you can make a fair estimate.

However, it might be more challenging to estimate adult size if you adopt your Newfypoo from an animal shelter. That said, you can apply some standard calculations to find your estimates on your own.

For medium-sized dogs, take your dog’s weight at 18 weeks old and multiply it by two to get an estimate. If you have a large Newfypoo, use their weight at 23 weeks and double it to get your full-size estimate.

When Do Newfiedoodles Stop Growing?

It depends on whether you have a standard or mini Newfypoo. Standard Newfypoos are typically large dogs that can take up to two years to reach their full size. The “mini” Newfiedoodles stop growing a little sooner and reach full size in 12 to 18 months.

There is no hard and fast rule about when dogs stop growing, only estimates. If you’re considering a Newfypoo, it’s best to expect a larger dog with plenty of energy and affection for everyone in the household.

For more guides similar to “When is a Newfypoo Full Grown,” you can check out:

You can learn more about the Newfypoo by watching “Newfypoo Dog Breed Information” down below: