Our team compiled a list of the best dog rescues in Eugene, Oregon. Before getting started, here’s what you need to know. First, it would seem that dog rescues are operated by angels. The work is immense, but the rewards are unconditional love. Second, around the picturesque city of Eugene, Oregon, their dog rescue business is sizeable, and there is a lot about the region that’s perfect for the challenge. Finally, perhaps inspired by the city’s open spaces and walking trails, Nike started in Eugene.

The landscape, a mix of rivers, mountains, and bright city lights, inspires many artists who help give the city a modern vibe. In addition, there are plenty of museums worth checking out. Thanks to the blended mix of wild nature and city elements, Eugene could be one of the best places for a rescue dog to wind up. Even better, in and around the Eugene, Oregon, area – where dogs have plenty of room to run – there are plenty of generous people who are doing much more than their part to rescue pets in need.

Before scrolling down this list of dog rescues in Eugene, Oregon, check out these other rescues: Best Doodle Rescues in California and Best Dog Rescues in the Bay Area.

The first on the list of the best dog rescues in Eugene, Oregon, is “Greenhill Humane Society.” Founded in 1944, Greenhill Humane Society is the only animal shelter in the Eugene area. Last year, 3,630 pets were either reunited with their families or adopted by forever families. In addition, 1,341 community cats were spayed or neutered to control the feral cat population. Their facility is newly remodeled, and the state-of-the-art structure is warm and welcoming.

Greenhill offers tours as a way to help educate visitors about humane animal and pet care practices. They also give presentations regularly, sometimes introducing visitors to Greenhill’s most delightful pet residents. Greenhill is a non-profit that relies primarily on community donations to care for temporary residents while making their surroundings comfortable. The shelter cares for dogs, cats, and other animals.

2. A New Leash on Life Pet Rescue and Transport

The staff at A New Leash on Life developed a significant passion for pet rescue and transport – one of the biggest obstacles to many adoptions – as well as troubling issues such as pet overpopulation, animal abuse, neglect, and abandonment. Rescue is its true mission. Dogs that find themselves at high kill shelters are lucky to be encountered by A New Leash, which transports the dogs to rescues that the facility partners with as part of its network, an area that covers the 1-4 Corridor from the Mexican to the Canadian borders.

Through transport, many animals are saved from euthanasia. For example, one employee has transferred more than 10,000 dogs – from puppies to senior pets – to rescue facilities where they can find their forever homes. A New Leash on Life Pet Rescue also works with pet food suppliers to gather donated food, supplies and treats distributed to various places and populations in need.

A New Leash on Life Pet Rescue and Transport Details

If you love a little dog or long for a new puppy to join the family, Wiggly Tails in Eugene is the place for you. They specialize in small dogs and take in both rescues from California-based high kill shelters and local dogs that have been owner surrendered. Many volunteers keep the rescue’s many wheels rolling smoothly, and they rely on fosters to help them save more dogs. Adoption is, of course, the mission.

They’ve taken in chihuahuas that must realize their best lives are right ahead of them, based on their giant smiles, puppy siblings who relax and snuggle together cheerful little Terriers, even depressed little dogs that have not yet realized what lucky dogs they finally have become. Each dog rescued by Wiggly Tails is evaluated, given vet care, including vaccines as well as a spay or neuter. Dogs are matched with a foster, and Wiggly Tails holds regular adoption events to help dogs find the right forever home. A six-person board leads the non-profit, which welcomes donations to continue its rescue efforts.

S.A.R.A’s Treasures Gift, Thrift, and Cat Adoption Center is operated by the Shelter Animal Resource Alliance (S.A.R.A) and works to rescue dogs from high-kill shelters. They raise money through a thrift shop, S.A.R.A.’s Treasures, which features a wide range of one-of-kind items, including the shelter’s adoptable cats, which roam freely, allowing prospective parents a better way to meet and fall in love with their new fur baby. (Go in for something vintage; come out with a calico that will become your best friend).

They also have pet food and other items available for sale, either by other rescues or pet owners. S.A.R.A.’s Treasures was founded in 2001 to rescue animals at high-kill shelters in danger of euthanasia. Dogs and cats that come through the rescue’s doors are given vet attention, quality food and treats, and lots of love until a foster – and forever homes – are found. From the beginning, local artist Alix Mosieur has been who donates the proceeds from her pet-based work to the shelter. Other donations are also welcome, including AmazonSmile proceeds, which donate a percentage of each purchase to various rescue facilities and humane societies.

SévaDog Family Rescue is located in the countryside outside of Eugene, where rescued animals can train in paradise, surrounded by fabulous views and comfortable places to rest and sleep. Dogs come from regional human societies, other rescues that might be too crowded or have a dog with special training needs, owner surrenders, and rescue partners in Washington and California.

Dogs live with the family – and at their facilities are loved by volunteers, staff, and founding families – so they are rarely alone and are constantly being socialized with other dogs and human friends. They also have playgroups and boarding so that dogs can make new friends in numerous ways. In addition, the family does rehabilitation and life immersion therapy, with programs adapted specially for each dog. Volunteers are always welcome to participate in socialization, training, and other areas of the family program. 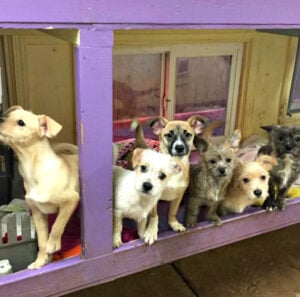 The last list of the best dog rescues in Eugene, Oregon, is “Luvable Dog Rescue.” Luvable Dog Rescue is operated on 55 acres outside of Eugene, owned by the founder of Luvable Dog Rescue, Liesl Wilhardt. Wilhardt created a paradise for dogs in need – dogs from high kill shelters, pregnant dogs, and especially Pitbulls, the breed that has the hardest time surviving in an animal shelter. Originally, Luvable Dog Rescue only took in Pitbulls but realized that many more dog breeds need emergency help over the years.

The rescue forests create a welcoming open space that gives dogs room to run while providing healthy, terpene-spiked air that helps keep dogs emotionally healthy and happy. The group’s motto is “Place, Pack, and Purpose,” which refers to the lovely landscapes where dogs are rehabilitated through hikes and outdoor play, the socialization that happens when dogs work with humans and other animals, all of which gives them their purpose, which is to be a loving family member and close companion to its new pack.

The staff works hard getting to know each dog, ensuring that they know enough about them to find the best, most compatible family. Potential adopters take home their dog for a week to test out how well it melds in its new home because finding the right home is key to a dog’s well-being. Luvable Dog Rescue raises money by selling swag, including T-shirts, hoodies, long-sleeved shirts, and tanks on the rescue’s Etsy site.

Conclusion For The “Best Dog Rescues in Eugene, Oregon”

We hope this list of dog rescues in Eugene, Oregon, will help you find a puppy in need. We like to thank you for making a difference by helping these dogs in need. If you have any questions, feel free to reach out to the details below each listed place.

For more dog rescues in other locations, you can check out:

To learn more about bringing your puppy home from a rescue, watch “How to Prep For a Rescue Dog” from In Ruff Company down below: