Due to the genes that they were given from Poodles and Maltese, Maltipoos are intelligent dogs. In other words, they won’t just bark for no reason, so if you notice that they have a lot of barking, you have to find out why, or if they have been trained, it will be easier.

Before scrolling down this guide, “Do Maltipoos Bark a Lot,” you can check out these other guides from our team at We Love Doodles: Best Bark Collars For Small Dogs and Best Shock Collars For Dogs Barking. 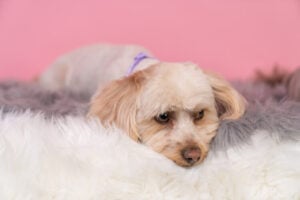 You can understand your Maltipoo faster if you find out what triggers their barking. In the following paragraphs, we will discuss the most common reasons that could be causing your Maltipoo to bark more than usual. 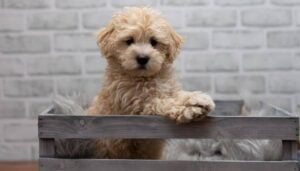 It’s easy for them to get accustomed to being around someone always since Maltipoos are so obsessed with their owners and families. Loneliness and the need for attention will develop when they are left alone. They bark and make a whining noise when trying to get your attention.

It’s very easy to train Maltipoos to be affectionate, making them great family dogs. People in general and their owners in particular love to be with them. They won’t be aggressive with your new guests as long as they get some attention. Since Maltipoos are smaller dogs, they enjoy being petted frequently and held.

You might not be able to give them the attention they crave if they carry on like this, even though it might seem like an amazing thing to have as a companion. Your Maltipoo will bark to get your attention if you don’t give it the attention it wants right away. Putting them on a schedule for activities will prevent them from barking for attention.

Schedule time for your Maltipoo to walk, play, or be trained. You should train your Maltipoo to know that it will get attention at certain times of the day.  Maltipoos with more experience will be great at knowing what’s going to happen, but puppies won’t understand routines yet, so if you want them to stop barking, you’ll need to establish a routine first.

Your Maltipoo will know that all they need to do to get what they want is bark if you give them the attention they want whenever they want it. As a result, your Maltipoo will bark at inconvenient times to make sure it gets what it wants. To encourage a Maltipoo’s independence, you should allow it to be more independent.

Keep toys and areas available in the house so you can be happy even if you’re home giving them attention. It is important to have an independent dog, as you don’t want to worry about them keeping themselves occupied if you can’t live at home. Ensure your Maltipoo gets as much attention as possible daily, but do not overdo it.

Related: Do Dogs Get Tired of Barking?

The same goes for dogs if they are not entertained or kept active. As Maltipoos have an abundance of energy, they will try to amuse themselves by barking if they aren’t exercised or stimulated mentally. Usually, when boredom causes them to bark, they will bark sitting or lying down, and it will be a constant bark that is not directed at anything in particular.

Because Maltipoos are high-energy dogs, they will get bored if they don’t have an outlet for their energy. If no outlet is provided, they will bark, especially if there is nothing they can do. Your pet should be available as many toys as possible to solve this problem. 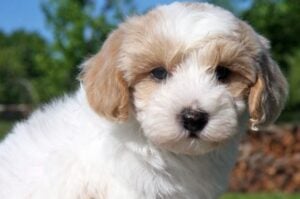 It’s not uncommon for Maltipoos to bark at strangers to alert you that they are around. As well as warning their owners of potential dangers, they want to ensure they are safe. You can reward your dog when it behaves correctly with secure solutions.

The Maltipoo remains loyal to its owners regardless of its size, just as other dogs do. To protect their owner and territory, they bark if they see or hear strangers nearby. Their normal response to this is to bark and growl aggressively. 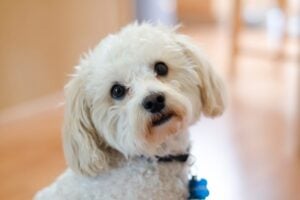 When their environment changes, many dogs experience fear and anxiety. Their reaction to hearing a new sound is usually to bark if they get scared. Cornered animals may also become aggressive and bark if they feel threatened. When there is someone they do not know around, they might bark in protection mode.

In cases of anxiety or fear, they may bark loudly. Dogs with anxiety and fear bark this way, and you shouldn’t ignore them. When you don’t make your dog’s environment safer, they’ll be stressed and depressed, so it’s important that your dog feels safe. Make sure you remove whatever scares them from their environment if you know what it is.

There are two kinds of loud sounds: those caused by construction outside or those that a new person causes in the house, which has to be socialized and acclimated to. Even though your dog might seem to be barking excessively, he believes there is now a fear present, and you will need to solve the problem.

It might be necessary for you to comfort them in the case of factors outside the environment scaring them, such as construction outside. There is likely no danger to your dog. It just needs to be reassured. You can also distract them by doing something else.

Taking them out to play fetch with their favorite toy is a great way to keep them entertained. To drown out the sound, you can turn on the TV for some dogs who enjoy watching TV. It doesn’t matter what the situation is. You can do things to make your dog less anxious and fearful.

Taking your dog to the vet might be a good idea if your dog is generally very anxious. There may be medication involved in treating their anxiety, which your vet can determine. Medications will be prescribed if your dog has chronic anxiety, and you should ensure they take them daily. As an alternative, you can comfort them if their anxiety is circumstantial. 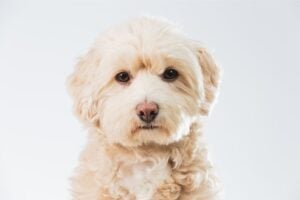 A Maltipoo may bark if it feels left alone because it suffers from separation anxiety. A natural way to solve this problem would be to let them stay inside the window, listen to calming music, and always leave a light on. To reduce anxiety, they need to be able to see the outside world.

Related: What Does It Mean When a Dog is Barking in its Sleep?

6. Maltipoos Bark If They Get Excited

These dogs are known for getting very excited very quickly, which is one of their primary triggers. As a result, barking occurs. It takes a lot of patience to find a solution to this problem. Your pet must learn not to demand attention from you.

7. The Arrival Of An Unexpected Guest

When your Maltipoo encounters someone unexpectedly, especially in an environment they consider their own; they will bark. Getting your pet socialized correctly is the easiest way to fix this, and provide them with treats when they behave appropriately.

8. Loud Noises Such As Thunder

9. Protect What They Consider Theirs

The Maltipoo is no different and will also have its territory like most dog breeds. You can expect them to bark when they feel that their water dishes or the area around their food are being invaded. Respecting their neighborhoods and letting them eat and drink peacefully is the easiest thing to do. You should only alter this behavior if your children are young and might accidentally trigger it.

How to Train Your Maltipoo Not to Bark When Triggered 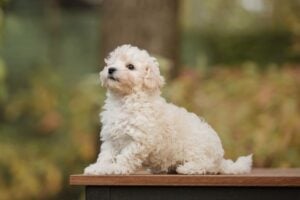 Training your dog to control itself even when triggered can be done in various ways. For instance – ignoring your dog’s barks. This method is used with babies to stop them from crying, which works for most dogs and babies.

It requires a lot of patience and control to accomplish this. Ignore them while in sight to give them a clear message that barking is not rewarded. The key is to remain focused and not to look in their direction as much as they bark.

Conclusion For “Do Maltipoos Bark a Lot”

Although Maltipoo dogs love barking, they get tired after barking their energy out. Your attention and treats will be given to them once they get tired and calm down to show that this is the behavior that gets rewarded. As Maltipoos are smart dogs, repeating these steps until they understand what they’re doing wrong shouldn’t take long.

For more similar guides from our team at We Love Doodles, you can check out:

You can learn more about the Maltipoo by watching “Maltipoo Pros and Cons” down below: