The interest in raising this Doodle breed comes from the United States and the United Kingdom. At the moment, this breed isn’t recognized by any country’s kennel associations since it isn’t a purebred dog. If you’re in the process of choosing a companion or you’re simply curious, this Cavapoochon dog breed guide will help you understand the responsibilities and the possible challenges of having this dog as your companion.

We also made a video on the Cavapoochon dog breed if you prefer it watch it below:

The Cavapoochon’s origin is still quite new, and the history is relatively unknown. We know that this Doodle breed’s origin is traced back to the 1990s when Steve and Linder Rogers of Timshell Farms conducted the first of its kind in Texas, United States. Even though it was originated decades ago in the United States, there weren’t many people interested in this Doodle breed. 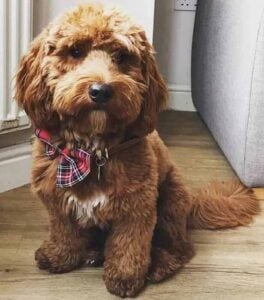 The Cavapoochon is described as a small miniature Doodle dog because of its puppy-like stature. Across the community, some people describe this dog as the “dog that doesn’t age” because its appearance doesn’t change much even when it becomes older and they constantly look like a teddy bear. Cavapoochon’s can grow between 12 to 13 inches tall by the time it’s an adult. As for its weight, this Doodle breed can weigh between 10 to 16 pounds depending on the size of the Poodle that was bred. Keep in mind that male Cavapoochons are slightly bigger in size. An important thing to keep in mind about the Cavapoochons is that their pedigree plays a significant influence in dictating their appearances and traits.

While Cavapoochons have a general description when it comes to their characteristics, checking their parent breeds’ history will help potential owners understand the possible outcome by the time they’re adults. This hybrid breed’s body type has a thick fleece coat that can be curly or wavy. Not only that, but they come in various shades of colors. If your Cavapoochon companion has a wavy or curly coat, then they’re most likely hypoallergenic. This means that they’ll be perfect around dog lovers that are allergy-sensitive. Since the Cavapoochon can have a curly or wavy coat, coat maintenance and grooming is required on a regular basis. 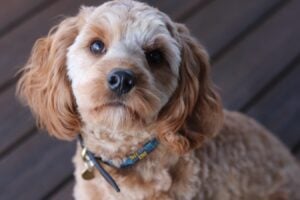 The Cavapoochon tends to have a strong immune system because of its hybrid vigor and mixed dog genes. This dog sheds very little and is mostly hypoallergenic. This feature makes the breed a perfect choice for individuals with allergies who desire to own pets. The downside is that Cavapoochon needs to be regularly groomed since it doesn’t shed hair.

Keeping your Cavapoochon in good health is relatively easy as long you take them for frequent walks. They don’t need a large living space and you could even raise them in an apartment or since they are small dogs. They are a highly adaptive dog breed and settle in a new environment easily.

Common health conditions known to affect the Cavapoochon are skin and ear infections. Though the breed has a robust immune system, its Poodle parent is known to suffer the risk of skin infections which also transcends to its offspring. They are also known to get ear infections since their hair will grow inside their ear, cultivating bacteria. Other than that, the Cavapoochon is a relatively healthy dog breed.

The most notable traits of the Cavapoochon are its high intelligence and friendliness which is a big plus to those with kids. They are a very active dog breed for being a small dog. However, they are easy to train due to the high Poodle intelligence. Thus, they respond well to commands and can easily be trained with a  little positive reinforcement.

Cost of Adoption and Breeding 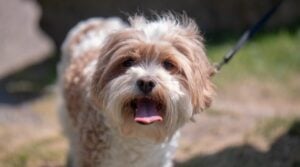 The Cavapoochon has wonderful personality traits and robust health features, which gives them the ability to adapt and thrive in most environments. If you happen to be allergic to pet allergies, the Cavapoochon may be a good choice for you!