Here’s an important question we have for you if you’re in search of Australian Labradoodle breeders in California. Have you settled on the following four-legged canine companion you’ve been wanting to be a part of your family? Choosing the right breed that suits your family’s needs and complexity can be challenging. Here’s a free tip, go for the magnificent Australian Labradoodles. The dogs are renowned for their high level of intelligence, agility, and playfulness. It’s one Poodle mix that’s easy to train, and they show a great deal of respect to their owners. You cannot, however, lose guard and adopt these vulnerable beauties from an inexperienced breeder.

First on the list of Australian Labradoodle breeders in California is “Rosebud Labradoodles.” Rosebud Labradoodles is our first breeder. It’s a small-sized family-run breeder in Carlsbad. Rosebud serves the labradoodle needs of San Diego, Riverside, and LA. The breeder prices itself as the home of ethically bred Labradoodles with an original bloodline on California’s west coast. All the magnificent breeding on Rosebud are health tested according to the Gold Paw standard of the breed.

The dogs on the ranch are treated like family members and live inside the owners’ homes. A stand-out feature of Rosebud Labradoodles is in the early stimulation of the puppies at the breeder. This process aids their life-long health, temperament, and playfulness. Rosebud also adopts the famed and widely acclaimed Bio Sensor Stimulation Exercises in raising their puppies. Over the years, this process has been identified as the appropriate method to breed labradoodle puppies in their early life. Applications for puppy adoption typically begin every September. 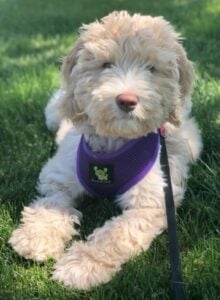 There they remain until they are adopted into their new homes. The puppies at the breeder are of different sizes and colors. They range from medium sizes to standard and large sizes. These include; 23 to 25 inches and 45 to 55 pounds. As is natural with all Australian Labradoodles, the puppies have adorable fleece coats. They are also non-shed and hypoallergenic. Claremont guarantees you the smartest, cutest, agile, friendliest Australian Labradoodle puppies.

At Elite Blend Labradoodles, the emphasis is on producing Labradoodle puppies loving, bonding, calm and playful. Their puppies are also easy to train and display incredible stamina such as fetching, jogging. They even swim. The breeder does not have kennels or cages but instead raises their puppies right inside their home. The puppies are domesticated from birth and quickly adapt to living and being around humans.

The breeding dogs of Elite Blend are kept in approved Guardian Homes where they live. This is to ensure they live a regular everyday life as much as possible. All dogs selected for the breeding program have the correct health clearances. This ensures that the breeding process produces healthy puppies free of defects. The breeder takes great care to vet the genetic traits of breeder studs and females. The result is a healthy no shed Australian Labradoodle that’s intelligent, mild-tempered, enthusiastic to please, and easy to train.

Brookside Labradoodles is a small, family-owned breeder in the outskirts of Sacramento. Their Australian Labradoodle breeds are gotten from healthy parents that have been extensively tested – the areas they take an interest in include; temperament, agility, and genetic purity. The dogs from the breeder are allergy-friendly and produce little to no shedding fleece coats. The breeder is certified by numerous organizations and groups.

Some of these groups include American Australian Labradoodle Association, ALCA, and WALA. The breeder says its puppies meet and exceed the health requirements of the three associations. Brookside Labradoodles offer a 2-year health warranty on all puppy adoptions from the breeder. The breeding studs and females from the breeder have been very selectively chosen. Brookside goes for the exclusively multi-generation breed of the canine. Among the awards, the breeder has won the prestigious WALA All-Star Breeder exclusive 8 Star award.

Premier Labradoodle breeder is a small unique breeder that produces and raises one litter at any particular time. This is so they can adequately cater to the needs of that particular litter. You can be sure that any labradoodle you adopt here has had plenty of contact with humans. Besides raising Australian Labradoodles, the ranch also has a small number of chickens, cats, and horses.

When the litters come of age, they are sent to a private trainer -Alyson Rodges, who runs Aly’s Puppy Boot Camp. This is so the puppies receive adequate training on fundamental skills and stamina. The Australian Labradoodles on the ranch may not be much, but they sure pack a punch. If you decide to adopt one of the puppies at the breeder, you can be assured they received adequate love and care. The Australian Labradoodles at the breeder are also affordable.

The breeder happily raises mini, medium, and standard Labradoodles. They also raise them in various red, caramel, cream, black, and apricot. Occasionally they produce Labradoodles in parti colors. Adopters are often spoilt for choice at the breeder. Having spent over 20 years in the business, Blossom Ranch approaches the breeding of Australian Labradoodle from a place of deep knowledge.

The breeding dogs are selected with great care and come from quality lines, superb genetic pedigrees. The selection process takes into cognizance the temperament and coat of the breeding parent so that they pass it on. Sutter Buttes Labradoodle breed is certified and recognized by the ALAA. They come in different sizes and colors, including Red, Chalk, Cream, and Parti.

Conclusion For The “Best Australian Labradoodle Breeders in California” 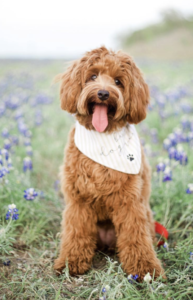 Australian Labradoodles are excellent pets to adopt, no doubt. Australian Labradoodles are perfect canines for California weather and topography. All that’s left is to decide on what breeder to adopt from, and this list has narrowed that down. The list contains the names of reliable and trusted breeders in California who have been in the business for a long. Hopefully, you find what you are looking for in one of them. Good luck, and we wish you all the best in your adoption journey.

For helpful Australian Labradoodle guides, feel free to check out: