By combining a Labrador Retriever and a Poodle, you opt for the best of both worlds. These puppies have the personality and energy to be a fun pet with the looks and elegance of a show dog. However, no dog breed combo is as foolproof as peanut butter and jelly. The Labradoodle breed does possess their own health issues. Knowing how to recognize them is an important step in early treatment and avoidance. Today, veterinarian Chryle Bonk tells us about 6 common Labradoodle health issues.

Most large dog breeds are prone to hip dysplasia. This is partially due to genetics and partly due to the environment. Environmental factors such as growth rate, diet, exercise, and hormones all play a role in whether or not your Labradoodle will get hip dysplasia. Large breed dogs, like standard Labradoodles, are more commonly affected than their smaller counterparts due to their more rapid growth rate. During this time, puppies need adequate, yet limited calcium and phosphorus levels to slow their bone growth, allowing muscles, ligaments, and tendons to keep up. They also need regular but not too strenuous of exercise.

Hip dysplasia has varying degrees, or grades. The treatment for it will depend on the grade of dysplasia and can consist of restricted exercise and anti-inflammatories to surgery. Signs of hip dysplasia include lameness or weakness in the hind legs and reluctance to get up or climb stairs. Young Labradoodle puppies can be suspected of hip dysplasia, but a definitive diagnosis shouldn’t be made until two years of age. Reputable Labradoodle breeders will have their breeding animals OFA screened prior to breeding. Hip dysplasia is one of the most common Labradoodle health issues for standard and medium-sized dogs.

Patellar luxation is a condition in which the kneecap dislocates or moves outside of its normal growth in the femur of the knee joint. Patellar luxation is also a graded condition where mild luxation usually doesn’t cause much trouble and dogs can live with it, to a very troublesome form where the pup can’t hardly tolerate to bear weight on the affected leg. It can affect one or both knees in Labradoodles.

It is very common in smaller breed dogs and Labradoodles coming from a smaller Poodle parent (i.e. Teacup, Micro, or Toy Labradoodles). A dog with patellar luxation may limp or kick the leg out behind them. Additionally, they may skip or choose not to run on the affected leg. The best treatment is surgery to either deepen the groove in the femur so that it’s harder for the kneecap to slide out or to tighten the kneecap attachments or the joint capsule itself to help force it to stay in the groove. Patellar luxation is a common Labradoodle health problem for smaller-sized doodles.

Even though a Labradoodles eyes are usually hidden behind a curly mop, they’re not without their own problems. Labradoodles are more prone to eye diseases such as progressive retinal atrophy, glaucoma, and cataracts. All of these diseases can lead to impaired vision and blindness. Catching the diseases early can provide some benefit, but treatment is usually complicated and lifelong. Your best bet is to use a reputable Labradoodle breeder that does pre-breeding screenings and to get your Labradoodle regular veterinary care to recognize any issues as soon as possible.

One of the main issues is atopic dermatitis or skin allergies. Atopic dermatitis is a hereditary condition where a dog’s skin becomes inflamed with it comes in contact with things in the environment. Similar to how your nose gets congested and your eyes get watery when the pollen count is high, dogs with atopic dermatitis experience sometimes extreme itchiness and a rash when environmental allergens are high.

The first sign you’ll probably notice in a Labradoodle is constant licking or scratching. You may also notice redness and swelling or a bumpy rash especially on the lighter haired parts of the body, like the belly, feet or face. For some dogs, this will only be a seasonal issue, while others may suffer year around.

The best treatment for atopic dermatitis is finding out exactly what a puppy is allergic to and then eliminating it from their surroundings. This is easier said than done most of the time. Allergy testing can be done and treatment with anti-inflammatories and antihistamines have varying results.

Just the name subvalvular aortic stenosis is frightening enough, but the actual process itself can be quite scary as well. Aortic stenosis refers to a heart condition in which the main artery leaving the heart that carries blood to the rest of the body, the aorta, is smaller than it should be. This causes blood to back up in the heart since it can’t all get through the tiny opening at once, similar to how the water in a river eddies behind a narrowing in a canyon. It’s a relatively common health issue in Labradoodles.

This makes it more difficult for the heart to pump enough blood to replenish the body and makes the heart pump harder to get more and more blood out. This disease is present at birth and dogs may not want to exercise or they will tire easily. Some may breathe heavy, be weak, or faint. Some dogs may die suddenly without any other symptoms.

Medications may help, depending on the severity. Really severe dogs may require surgery.

Addison’s disease, or hypoadrenocorticism, is the reverse of Cushing’s disease. It occurs when the body doesn’t produce enough of the hormones cortisol or aldosterone. Dogs with Addison’s will be hard to pin point as they will have varying symptoms that may come and go. However, they may have an Addisonian crisis without the dog owners ever knowing that they had Addison’s in the first place. Treatment usually involves hormonal supplementation. You’ll see this from time to time in Labradoodles. 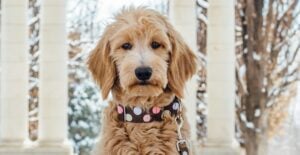 The Labradoodle combination makes for a great pet and companion. Even though this breed isn’t without its issues, your best bet to avoid these common health concerns is to use a reputable breeder that screens their animals prior to breeding. You should also avoid any breeder that says their Labradoodle puppies are 100% healthy because no one can ever make that claim. We hope that we shed some light on the common Labradoodle health problems.