Can a dog kill a lion or not? Here’s what you need to know. It is instantly funny to think that there could be any land-dwelling animal that could kill a lion apart from an elephant. But surprisingly enough, dogs have been known to hunt and kill lions in packs and perhaps even in one-on-one combat.

It is rare for a single dog to overtake a lion, but can a dog kill a lion? Dogs that travel in packs can kill a single lion if they can withstand a vicious fight. Lions are much stronger and more predatory than dogs, so there is a very slim chance that a single dog could kill a lion since the lion would fight the dog with all of its power. A Rhodesian Ridgeback dog would be a lion’s only firm competition.

Lions have long been known as the most ferocious animals on land, in direct contrast to a great white shark in the world’s oceans. But lions are certainly not invincible, and there are certain breeds of wild dogs and even domestic dogs that could take on a lion in the wild. In this guide, we will thoroughly explore if a dog can kill a lion.

Before scrolling down this guide, “Can a Dog Kill a Lion,” you can check out these other content from our team at We Love Doodles: How Many Eggs Can a Dog Eat in a Day and Can a Dog Mate With a Cat?

Have There Been Incidents of a Dog Killing a Lion? 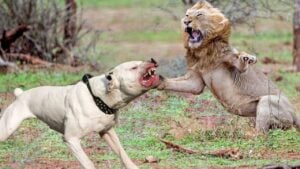 There have been reports of wild dogs (plural) killing a sole lion in the wild. Wildlife biologist George Schaller once noted in a 1972 report that he witnessed eight wild dogs hunt, fight, and eventually kill an adult male lion hunting outside his pride. The type of wild dogs wasn’t clear, but this is early evidence of dogs successfully killing lions.

The key point in the scientific literature related to this question points to packs of dogs killing lions and very few (if any) instances of one wild dog killing a lone lion. This is because lions are incredibly powerful and vicious animals when they search for prey or threaten their survival. A lion possesses powerful and thick, muscular legs that are used to trample animals much taller and bulkier than themselves.

A lion’s claws are razor sharp and grow to 1 and a half inches in length. Lions use their claws to their advantage, allowing them to rip into their prey with stunning accuracy in one fatal blow. A lion’s teeth are equally as sharp, but interestingly enough, a lion’s bite force is only about 650 PSI (pounds per square inch), which is only slightly stronger than a Rottweiler.

But the sharpness of their claws combined with their powerful legs, lunging behavior, and speed makes a lion virtually indestructible among today’s land animals. Most packs of dogs likely only ever hunt sole lions that are sickly, are physically hurt, or lion cubs. But packs of wild dogs could indeed kill a lion, but it would be a tiring and potentially dangerous fight for them.

Are Lions Afraid of Dogs? 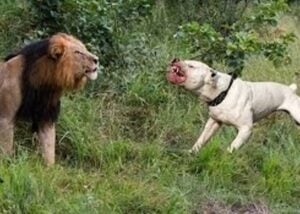 Lions are certainly not afraid of dogs. It could be the case that a lion cub would likely register fear of an approaching dog, but certainly not an adult lion. Lions would also likely not fear a pack of dogs either. It is not completely clear why lions fear very few (if any) land animals, but most of this has to do with the dominance of their ecosystem. Lions have such powerful legs and claws that this allows them to have virtually no land predators to fear.

Lions also likely know that they could easily kill a single dog, so this is also why lions are not afraid of dogs. Dogs are pack hunters, and when in a pack, dogs can be well-coordinated and synchronized in how they take turns attacking and exhausting their potential prey. On the other hand, if a pride of lions came upon a pack of wild dogs, the lions would easily tear through the pack.

More Dog Questions: Can a Dog Get Pregnant When Not in Heat and Can Dogs Eat Garlic Bread?

Can One Dog Kill a Lion? 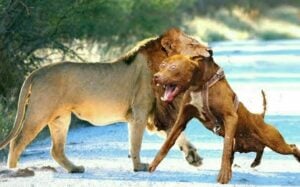 It is highly unlikely that any dog on the planet could kill a lion in a one-on-one fight for supremacy. Dogs are not well-equipped when fighting in one-on-one combat, which is true even when two dogs fight. Dogs take great care not to damage their teeth with too much force, and unlike lions, they have no claws to slash and rip an opponent’s throat or other sensitive areas on their body.

In this theoretical circumstance, a lion could easily kill a dog, no matter what breed the dog is, in practically no time. A dog is also nowhere near as quick as a lion, so moving out of the way of a lion’s claws would be impossible. This is why packs of dogs can sometimes kill a lion because they coordinate and take turns, tiring the lion out. Even a sickly or injured lion could kill a single dog in one-on-one combat.

What Dogs Can Kill a Lion? 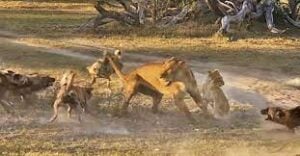 Grouping dogs all together as one species inside this question is misleading since it is obvious that small breeds of dogs, even most domestic breeds, could not kill a lion, even in packs. But some dog breeds could hold their own with a lion, but without a pack, the lion would easily overtake any of these dogs. But it is worth singling out some breeds that could, in some ways, match a lion based solely on some of their characteristics. 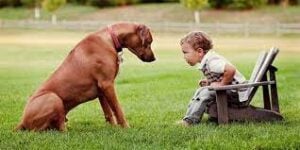 One of the most frequently asked questions on this topic is if a Ridgeback dog can kill a lion? Unfortunately for those seeking a viable answer, this scenario is largely based on a popular myth matching this dog breed against a lion. Again, it would take a pack, but the Rhodesian Ridgeback does mimic some of the lions’ territorial and hunting instincts.

Namely, the hunting, herding, and tiring out of various prey or animals they have been assigned to herd successfully. Towards the end of the nineteenth century, Rhodesian Ridgebacks were taken to Africa by various contingents who needed to herd lions and clear them off a patch of land. This breed did prove useful in giving lions a workout and driving them away, but it is unclear (and highly unlikely) that Rhodesian Ridgebacks killed any lions.

The American Bandogge Mastiff is interesting in this scenario since this breed has a bite force of about 100 PSI stronger than a lion’s. But again, the lion is too quick and powerful with its legs and claws to allow this breed to land a fatal bite.

The Boerboel is another breed that is a very large and very alert breed of dog. Due to their size and strength, this breed could last a while in a one-on-one fight with an adult lion. This breed can also ferociously attack prey if trained in this manner.

The Cane Corso is a dog breed sometimes mistaken for a Boxer dog. Although similar in appearance, the Cane Corso has a much more powerful bite, which is also stronger than a lion’s bite force. But this breed is quite small, and a lion would tower over this breed.

The Caucasian Shepherd is one of the strongest and largest breeds of dog. An adult Caucasian Shepherd could stand in similar stature to a lion when placed side-by-side. But this breed is largely trained as a guard dog and not necessarily an attack dog.

The Dogo Argentino breed is possibly one of the most alert and energetic dog breeds. This breed excels at hunting, and if combined with a pack of Dogo Argentinos, a lion would likely succumb to a pack of this dog breed.

The Rottweiler is a popular breed of dog. Thanks to their powerful front body, their agility as both a guard and attack dog and their hunting instincts, the Rottweiler could overtake a sole lion if it could dodge a lion’s claws.

When it comes to hunting dogs, the Fila Brasileiro is one of the most agile and remarkable breeds of hunting dogs. This breed has an excellent level of alertness, powerful strength, and fast running speeds. This is certainly a breed that, if combined in a pack, could tire a lion out in record time.

More Dog Questions: Can Dogs Get a Brain Freeze?

How Many Dogs Will it Take to Kill a Lion? 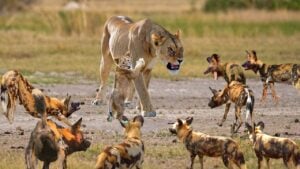 When it comes to packs of dogs attempting to kill a lion, it would depend on the type of dog to determine how many dogs it would take to kill a lion. But depending on the breed of dog, it would take anywhere from five to eight dogs coordinating their attacks on one lion to kill it. If it is a very large adult male lion, it could take even more than eight to kill a lion of this magnitude.

Conclusion For “Can a Dog Kill a Lion”

So, can a dog kill a lion? A single dog will likely not be able to kill a lion. A lion could likely kill a dog instantly with one blow to its head, thanks to a lion’s razor-sharp claws. A lion’s teeth are also much, much sharper than a dog’s teeth. A lion’s legs are incredibly powerful and possess very fast running speeds. It would take a pack of dogs to kill a lion, and even this is not certain since lions are agile, ferocious predators.

If you enjoyed reading this guide, “Can a Dog Kill a Lion,” you can check out: