Looking for Golden Retriever puppies in New Mexico can be overwhelming, but no worries, as We Love Doodles have created a list of breeders for you to look through. Often dubbed as America’s sweetheart, the Golden Retriever is one of the most popular dog breeds in the United States and, in 1999, was the second most popular AKC breed.

Even into adulthood, the breed’s cheerful, playful, and puppy-like nature makes them great family companions. Similarly, their intelligence drives them to be admiringly competent working dogs. The first breed of Golden Retrievers was in the early 1800s in Scotland, and they were engaged in hunting.

Although they still excel at retrieving games for hunters, they are also outstanding at tracking and sniffing contraband for law enforcement. They are innately athletic and do well in dog sports such as agility and competitive obedience, search and rescue jobs, and guide and therapy work.

Golden Retriever puppies are even-tempered, brilliant, affectionate, and gentle with children, and they tend to agree well with other puppies and strangers. They are a healthy breed with a deep chest and well-structured body that grows to about 21 to 24 inches tall, weighing about 55 to 75 pounds (25 to 32 kilograms). 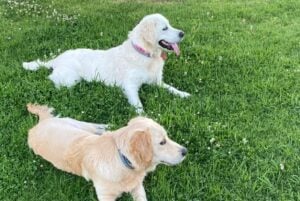 Determining to go through a breeder for your new golden retriever puppy is a subjective choice that requires extensive research for a liable breeder. One that offers sound, ethically-sourced golden retriever puppies. Responsible breeders would not shy away from being probed regarding a dog or puppy’s disposition, health conditions, and the dog or puppy behavior within the household. 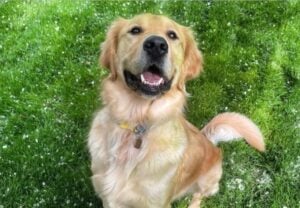 If you’re thinking of getting a Golden Retriever puppy but don’t exactly know where to go or what to do, going to PuppySpot is always a good option. They are famous for offering very high-quality puppies, and using their site is easy and convenient.

Their business model has proven quite successful, having sold more than 200,000 puppies (including Golden Retrievers). For their quality, they’ve received over 10,000 5-star reviews.

PuppySpot is committed to helping you get your hands on your dream puppy as easily as possible. They aim to deliver the happiest and healthiest version of that puppy you’ll ever find.

PuppySpot was founded by using the internet to offer a nationwide market where people from everywhere in the United States could log in and find their dream puppy from hundreds of choices in a matter of minutes. This completely changed the market, propelling PuppySpot to the forefront of the race.

Therefore, what you see is exactly what you’ll be getting. Heath is the most important of all the priorities when breeding. Breeders strive to take the very best care of the puppy. Even before sending it your way, it’ll go through a final check from nose to tail to see if the Golden Retriever puppy is fit to go. Additionally, the puppy will come with a 10-year health guarantee.

Having raised Golden Retrievers in her home for twenty-nine years, this breeder believes it has been the best judgment she has implemented regarding animals. The dogs are a vital part of her household now. The dogs bred emanate from diverse lines across the United States and even extended to Germany.

Windy Point Goldens is 45 miles south of Albuquerque, a smooth and easy drive without the traffic buzz of the city. This smooth and easy encompass loads of activities from camping, obedience training and competing in 4H, horseback riding, napping in the children’s bedrooms, and having fun with grandchildren.

These energize the puppies to be happier, healthier dogs, but the constant interaction with other puppies and stimulation within the environment also build up their confidence and socialization.

At Windy Point Goldens, they hold off breeding the dogs until they age at least two. The rationale behind this is to observe and confirm the health status and scan for the golden characteristics that are true to the breed.

They are keen on raising healthy family pets and carrying those true golden elements – playfulness, even-tempered, and affectionate – with the ideal minimum training needed. Healthwise, the puppies have their dew claws withdrawn, shots and visits to the vet are timely, and deworming is done regularly.

The breeders for Sweet Cream Goldens, the Orths, are family breeders with a huge love for Golden Retrievers, who they consider part of the household. Sweet Cream Goldens intend to breed and raise wholesome and remarkable AKC golden retriever puppies with their permanent homes.

For the Orths, growing up with dogs always in the home, it had always been love at first sight. And since the inception of breeding Goldens, the aim has been to groom puppies in ideal situations where they obtain lots of love, attention, and healthy stimulation.

Their deep-rooted love for these breeds wishes for families to experience the nature of their sweet companionship. In raising these dogs, the family has a lot of influence on the puppies’ upbringing, socialization, and happiness.

The Orths have three sons and a daughter participating in the Goldens’ growth. They are located on almost 2-acre land with plenty of room for the family and puppies to play. Their Golden Retriever puppies range in color from nearly white to a beautiful creamy white, and they emerge from dog parents with strong pedigrees and vet-approved health clearances.

Florence Josephs, the breeder for Mattiaci Goldens Retrievers, is a huge dog lover all-around. It was way back in 1987 that she bought her first AKC Golden, and it has been competitions, training, and wins since then.

To summarise her achievements, in 14 years, under the Mattiaci prefix, she bred 26 AKC Champion Goldens in the Western Region of the United States, was one of the top breeders of Kuvasz champions in the history of the breed and was cited Breeder of the Year during membership with Five Valley Kennel Club of Montana.

She is the recipient of the highest Award American Kennel Club gives and multiple Working Group winners. For years, she volunteered in conformation handling classes, hunt tests, working certificate tests, and field trials each year.

She relished training dogs in AKC obedience, Schutzhund, conformation, rally, agility, tracking, and weight pulled over the years and was a former member of Alaska’s Dog Obedience Training Club. Her passion is displaying dogs in her breeding program to their AKC championships and earning obedience and low-level hunting titles.

She builds dogs that can be conditioned as Service dogs, therapy dogs, and emotional support dogs. The character, health background, and how the dogs are raised prepare them for versatility in many training options. The dogs enjoy the daily exercise of running and swimming with their fellows.

They accomplish a daily 2-mile run through the 50-acre hayfield on her 207-acre ranch down to the creek (an hour-long run). They also run 2 miles up on the Sourdough Trail in Bozeman. These keep them in constant sound health, besides the regular vet visits and shots.

Kristopher & Kalyssa Creed formed Creed Goldens as a small, family-owned, operated breeding program. Their fondness for golden retrievers began in 2011 with their first golden puppy, who not only transformed their lives but nourished them with delight in the most content times and the harshest.

More research on better care for the puppy, Sadie, the breed standard, and communicating with Sadie’s breeder and other reputed breeders have shaped what is now Creed Goldens. Creed Goldens is nationwide, with puppies in most States in the US.

Their first litter was in 2017. Puppies from their litters are born and raised in Kalyssa’s home and are well socialized when they depart the kennel at the age minimum of 8 weeks. Kristopher and Kalyssa assess the puppies during their absolute time with them as they develop under close supervision.

They observe their social interactions, confidence, drive, and disposition. The deworming schedule for the puppies is bimonthly from 2weeks old to 8 weeks old. There is a planned first vet exam and vaccinations at six weeks old.

With the results from the puppy match survey responded by each prospective puppy owner on the waiting list, each puppy will be matched to the household that best aligns with their needs, considering family, lifestyle, training, and objective.

Since then, they have expanded into a lovely dwelling, five acres of land, a pond for the canine to have fun, and a kennel with indoor /outdoor runs. The twenty years had been just as happy for Crawford and the missus as it is for the Goldens. Golden Creek Kennels usually offer lifetime services to puppy owners before and after the puppy departs from the kennel.

Eventually, all their puppy owners turn to families returning for Open Houses, seeking a second or third golden puppy, or for other reasons. For this reason, Crawford and the missus pride themselves as breeders that deliver families with goldens of supreme quality, wholesome, clever, and temperament tested.

All their golden retrievers arrive from high-ranking championship lines, and every puppy goes home with a twenty-six-month guarantee against such genetic disorders as hip dysplasia or cataracts. After the puppies’ full series of immunizations against infectious diseases, they are allowed maximum interaction with people and other dogs and puppies.

This interaction builds their social skills and enables the puppy the liberty to perceive and form a match. Golden Creek Kennels knows the essence of beginning a golden puppy with appropriate training; hence their recommendation to their puppy owners is to go for either of two options: Puppy Head Start Program (8 weeks to 5 months) and Formal Obedience for (6 months and above).

Conclusion For Golden Retriever Puppies For Sale In New Mexico

If you intend to have a Golden Retriever in the home, it is best to mentally prepare for loads of energy, fun, and lively addition to your household. However, the first key ‘to do’ would be to find a responsible breeder.

For more guides similar to this list of breeders with Golden Retriever puppies in New Mexico, you can check out:

If you enjoyed this guide for breeders with Golden Retriever puppies in New Mexico for sale, you might want to take a look at the “9 Things You Must Know Before Getting A Golden Retriever” video down below: