A Chow Doodle is a mixed blend of two completely different dog breeds. First, the Chow Chow originates from China and is primarily known for their cute “lion dog” look and happy smile. Second, the Poodle is known to be hypoallergenic, have hair that doesn’t shed, agile, and extremely intelligent. However, mixing the Chow Chow and Poodle makes for an interesting combination of dog that has good genetics and personality traits.

The Chow Poodle is a relatively new type of canine, and on the off chance that you are thinking about purchasing one, you should make sure that you can care for a medium sized dog that requires physical exercise and mental stimulation. Your dog will have differing levels of attributes from both the Chow Chow and Poodle.

What Is A Chow Doodle?

A Chow Doodle is a type of dog with a ton of different nicknames including the Chow Poodle, Chowpoo, and Poochow.  This dog has several different names, yet they all come down to one dog: a Chow Chow and Poodle dog.

At first thought, the Chow Chow and Poodle shouldn’t be crossbred together. However, the Chow Chow dog breed sheds a lot of hair over the ground.  Crossbreeding the Chow Chow with a Poodle makes the Chow Doodle which sheds very little hair and is hypoallergenic. On the other hand, since this isn’t a purebred dog, the results of crossbreeding a Chow Chow Poodle mix means there will be lots of variety in coat color, personality, and size.

The Chow Doodle is a brand new type of dog breed without any known origins. Chances are that a breeder simply wanted to make a Chow Chow that doesn’t shed hair and doesn’t cause severe pet allergies. 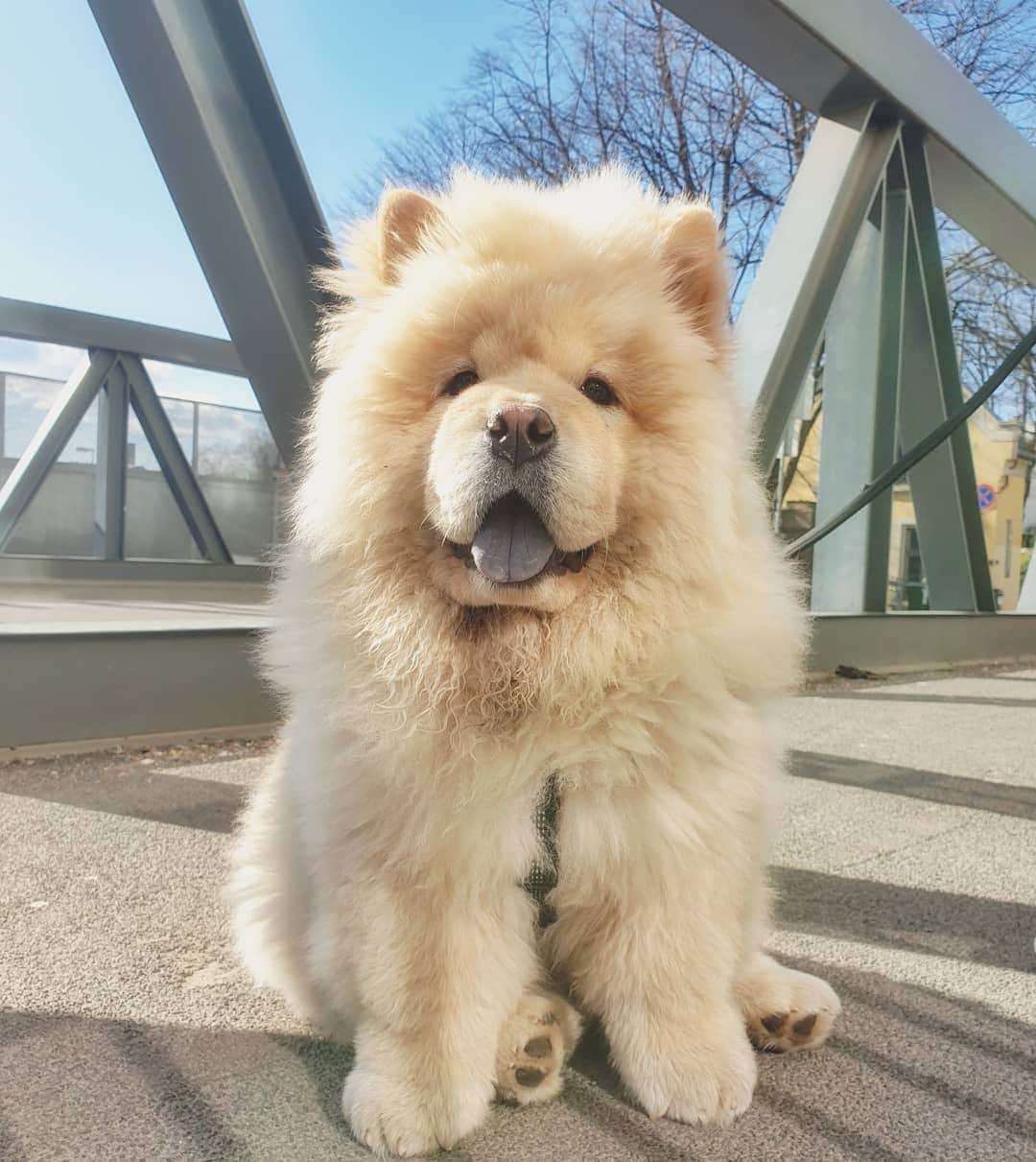 The Chow Chow that we know and love initially originated from Asia and is nicknamed the “puffy lion dog”.  This is an extremely old dog breed that is thought to have originated over 2,000 years ago from China to pull sleds.  Chow Chows are an extremely popular dog breed with over 10,000 registrations per year according to the AKC.

The Chow Chow is an extremely fluffy animal with erect ears and a smooth double coat.  The Chow Chow comes in a relatively standard red, tan, or light brown color. They get between 40 to 90 pounds and stand 17 to 22 inches tall.  In addition, the Chow Chow is extremely patient and an easy going dog that resembles the personality of a cat.

The Poodle breed started in Germany where they used to hunt and retrieve birds in the water. Remarkable swimmers with high intellect, the Poodle makes an incredible pet and is extremely popular around the world.  They have become so popular that there are numerous sizes of the Poodle including toy, miniature, and standard. The best highlights about the Poodle is that they don’t shed fur all over your clothes or house. In addition, they are considered hypoallergenic which is perfect for anyone who gets pet allergies. 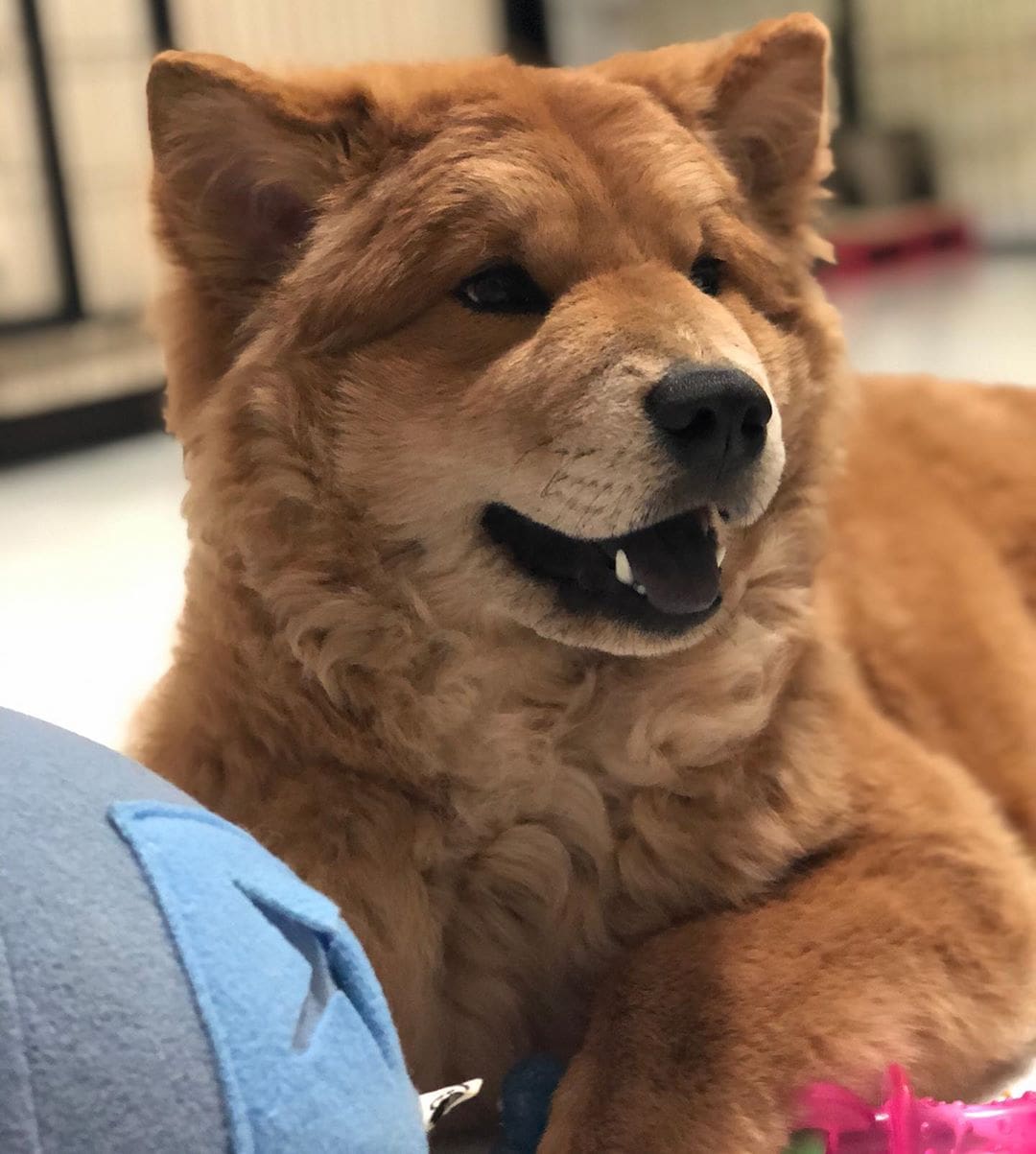 Since the Chow Chow Poodle mix is not a purebred dog, there are many different sizes and colors of this dog.  No Chow Doodle will have the same coat color, personality, temperament, and physical characteristics because they are a new dog breed — this is what makes them extra special and unique.  Chow Poodles are typically one solid color ranging from white to black with lighter shades of that same color throughout their body. The most common colors of this Chow Chow Poodle mix is going to be red, light brown, or white.  However, since the Poodle comes in over 10 colors that are standard to the breed, the colors of the Chow Doodle are basically endless.

In addition, since there are many different sizes of the Poodle and Chow Chow, a Poochow could technically range in weight anywhere between 25 pounds and over 80 pounds.  However, the most common weight of a Chowpoo is going to be around 40 to 60 pounds. Some breeders are making a “miniature Chow Doodle” which is basically a toy poodle that is bred with a smaller female Chow Chow.  This is why it is possible to get a Chow Doodle that is around 25 pounds or less.

The standard features of this Chow Chow Poodle mix will remain the same with the exception of the ears that stand straight up and are rounded.  For some reason, Chowpoo sometimes have floppy ears rather than ears that stand straight up. A Chow Doodle will have a thick two layer coat of hair that gives them a shaggy appearance.  Their hair is often slightly more wavvy like a Poodle, but they still have the same cute face of a Chow Chow.

The best way to predict the color, personality, and temperament of the Poodle Chow Chow mix is to look at the parents.  However, just be aware that there may be recessive genes that don’t show up in the parents that could be passed onto the offspring. 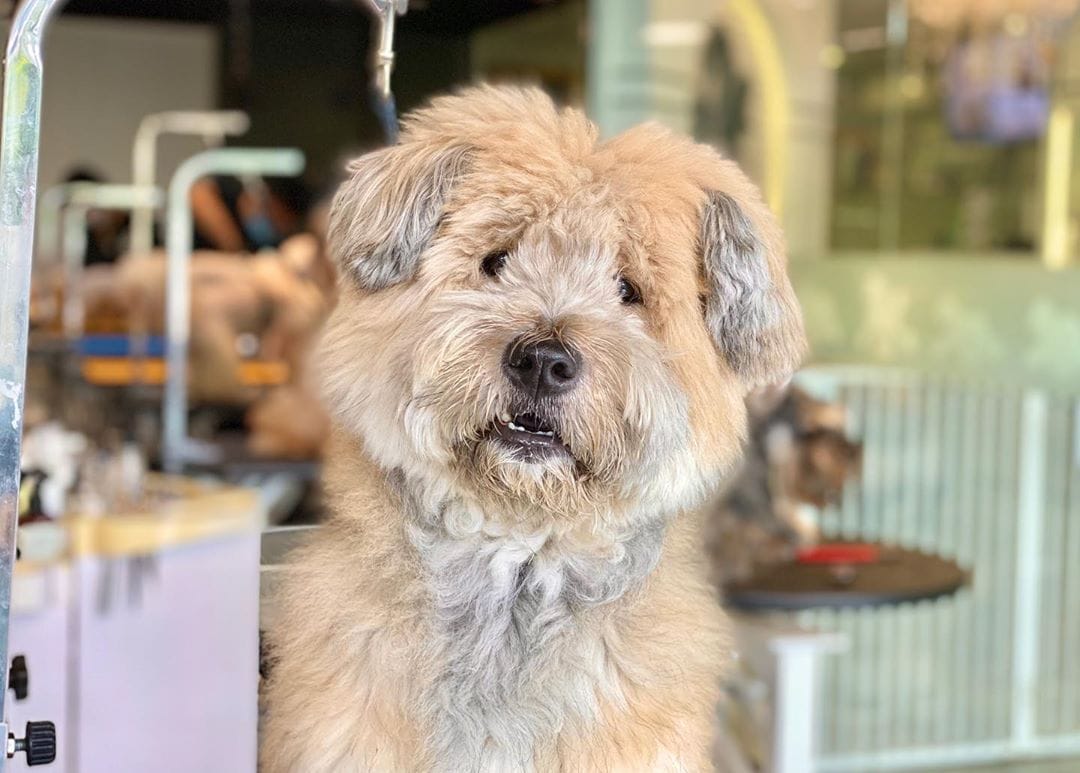 A Chowpoo has a great passive demeanor that makes for the ideal pet. Loving and brilliant, the Poochow is highly trainable and loves to satisfy their owners. Also, a Chow Doodle gets along well with other family members, strangers, and even kids.  Many people describe their personality as that of a cat — easygoing and keep to themselves. They are also extremely “derpy” dogs that just love to enjoy life.

However, the Chow Chow Poodle mix doesn’t get all the best hereditary qualities. This type of canine can be disobedient and bark at strangers if they are not properly socialized as a puppy. In addition, without at least some daily exercise and mental exercises the Poodle Chow Chow mix may chew on objects arounds the house due to their boredom. Fortunately this breed tends never to be forceful or aggressive when they aren’t happy.

Fortunately both the Poodle Chow Chow mix is generally a very healthy breed. Picking a reputable breeder will also help alleviate any fears of bad health. A good breeder should know and disclose to you the historical genetic tests of the parents. The Chowpoo should expect to have a normal life expectancy of 10 to 14 years.

With regards to general upkeep this breed will require a great deal of grooming in the form of daily brushing and regular haircuts in order to prevent their fur from tangling. On the upside, you won’t need to vacuum up a lot of dog hair regularly and you won’t suffer from bad pet allergies.

Is A Chow Doodle The Right Dog For Me?

Nothing is really certain in terms of a Chow Doodles personality, color, or temperament since this isn’t a purebred dog. However, we do know that Chow Doodles are loving, playful, knowledgeable, and extremely cute.  In addition, they are likely going to be an extremely furry pet that gets along great with others and even kids!

As long as you know that your dog can have a blend of attributes and qualities of a crossbreed dog then you should be well prepared. The Chow Chow Poodle mix will in general shed significantly less than a normal Chow Chow and is more hypoallergenic than a normal dog because of their Poodle qualities.

What do you call a Chow Chow Poodle mix?

A Chow Chow Poodle mix typically called the Chow Poodle, Chowpoo, and Poochow.  This dog breed is a mixed breed between a Chow Chow and a Poodle. They are an extra soft, fluffy, and cute dog breed.

What does a Chow Chow Poodle mix look like?

A Chow Chow Poodle mix is typically red, tan, or light brown in color.  However, since they are crossbred between two dog breeds with no standard colors, they could technically be any color.  You’ll want to look at the genetics of the parent Poodle and parent Chow Chow to get a better understanding of what color the Chow Doodle will look like.