A Bernedoodle is a dog that is going to need to be groomed regularly due to their nonshedding and hypoallergenic coat. Due to the Poodle genetics, the risk of not giving your Bernedoodle a haircut will result in matted, tangled, and pelted fur which ends up irritating your dog. These conditions are uncomfortable and harmful for your Bernedoodle long-term.

It can be overwhelming to understand the types of Bernedoodle haircuts or what to tell the groomer to do. There are a few common haircuts that you will see on a Bernedoodle, but when talking to a groomer you will have to be specific on how you want your dog’s hair cut. That means you need to know what a groomer is talking about and the features of the grooming style.

We are going to help you outline the main cuts and what they should look like on your Bernedoodle. In general, the main haircut styles on a Bernedoodle will be the Winter Cut, Summer Cut, Kennel Cut, and Poodle Cut. You’ll also sometimes hear groomers talk about the Teddy Bear Cut or Puppy Cut, the Lamb cut, and the Mohawk cut.

Other articles you might like: When is your Bernedoodle Full Grown and Best Brush for a Goldendoodle. 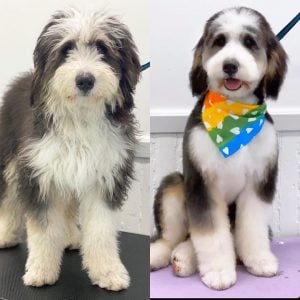 One of the most common Bernedoodle haircuts is the Winter Cut. This is really a generic term when it comes to grooming and can mean many things for professional groomers.

It’s actually unlikely that a groomer has heard of this term before if they have never groomed a Bernedoodle. Typically, the Winter Haitcut means longer hair all over their body. This is a cut that owners will get if they live in a cold climate or like their dog’s coat longer. We don’t recommend the Winter Cut for people who live in warmer climates and their Bernedoodle likes to run outside.

The Bernedoodle Winter Cut is a generic name for long hair and you will need to be very clear with the groomer about what you want. In general, the longer that you keep your doodle’s hair, the quicker it is going to matt or tangle. Getting the Bernedoodle Winter Haircut might look extremely cut, but you will end up back at the groomers quicker due to matts and tangles. Below are the features of a traditional Winter Cut for a Bernedoodle. 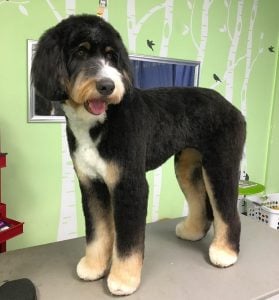 Bernedoodles are pretty basic when it comes to their grooming and this style proves it. The Bernedoodle Summer Cut is a common and very typical haircut to see of Bernedoodle, especially during the Summer. It isn’t a special or complicated haircut. In fact, it is quite simply the Winter Cut but a lot shorter. Instead of the body hair being 1.5 to 2 inches in length, the hair of a Bernedoodle Summer Cut is going to less than 1 inch.

When you are asking for this cut, make sure the groomer knows what you are asking. An inexperienced groomer that has not seen many Bernedoodles might simply shave your dog. 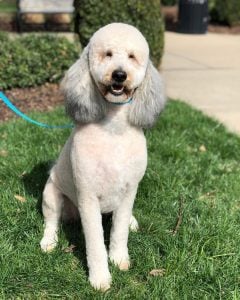 The Bernedoodle Kennel Cut is a type of haircut that you will have to be careful with when you request it. This will mean something different to almost every groomer that hears it. However, overall this is a common name for a very short haircut. In general, Bernedoodles only have to get a Kennel Cut if their hair is extremely matted and tangled. Otherwise, pet owners who don’t want to spend money at the groomers every couple of months will request a Bernedoodle Kennel Cut.

The idea behind the Bernedoodle Kennel Cut is to keep your dog clean and safe while they are kenneled. This is typically done when dogs will be boarding, hence the name Kennel Cut. This haircut prevents hair from getting matted or tangled.

This is also common with mother Bernedoodle dogs that are due to whelp. Puppies tend to mat the mother’s hair when they nurse so it is easier to have shorter hair.

If you don’t want a very short hair cut on your Bernedoodle then do not request a kennel cut unless you are going to be very clear and possibly have pictures. 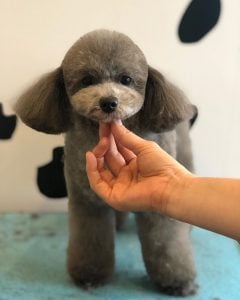 This type of Bernedoodle haircut is a nod to one side of the family – we’re looking at the Poodle. However, you have to be really specific because there are many different types of Bernedoodle Poodle Cuts. Typically when someone says they want a Poodle cut on their Bernedoodle this is more of a dog show haircut style.

If your dog is active outdoors or you are too busy to brush the long parts of the haircut daily then this may not be a good cut for your dog. A Poodle Cut makes your dog look extremely cute, but it’s also somewhat difficult to maintain.

We are going to give you the features of the standard Poodle cut that most groomers will think of when you ask for this. Make sure you take a picture of what you want as it will work better than trying to describe a Poodle haircut. 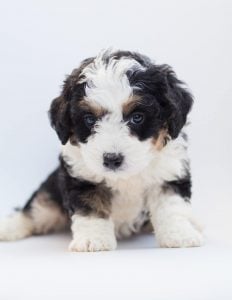 The best thing about Bernedoodles is that they can pull off almost any type of haircut style. They have amazing hair thanks to both sides of the genetic family and you can get creative when it comes to their grooming styles.

Because they are part Poodle you could have almost any Poodle style done on this dog. Here is a list of cuts you could try out for fun. 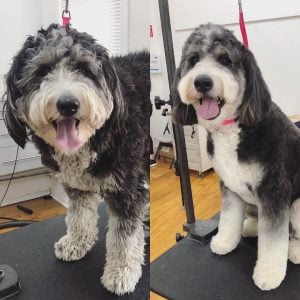 How to Avoid Confusion at The Groomer 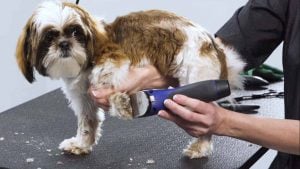 The worst thing that can happen with a grooming session is a miscommunication between the dog owner and the groomer. If you, as the owner, feel like you have communicated clearly what you want and leave confident that you will pick up a perfectly groomed Bernedoodle, but come back to a complete shave job then you will not be happy.

Unfortunately, things like this happen all when groomers give your Bernedoodle a haircut. What one person thinks is a Summer Cut will be something else to another groomer. Here are a few ways to prevent these mix-ups:

Why Groom a Bernedoodle

If you are new to Bernedoodles or are simply researching the breed and what they will need as far as hair care then you may wonder why someone would need to worry so much about grooming a Bernedoodle. Those are valid questions.

A Bernese Mountain dog is a very furry dog. They are bred to live in the cold mountains and have a long dual coat to prove it. While this purebred dog may not need a hair cut often, they do need to be brushed, bathed, and trimmed up to prevent issues.

The other part of the Bernese Mountain dog is a Poodle. They are water dogs and have tight curls all over their bodies. They don’t shed because they don’t have fur, but instead they have hair. This hair is very prone to matting and needs brushed daily and cut every six to eight weeks.

When you combine these two breeds together you get a dog that is high maintenance on the grooming front. Bernedoodles will need haircuts, and it’s up to you to decide how you want them to look. 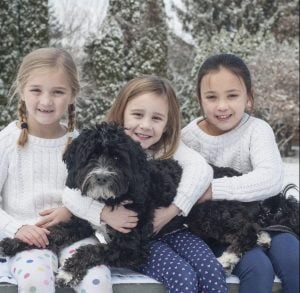 Really the sky’s the limit when you’re choosing the best types of Bernedoodles haircuts. You can be as creative or as conservative as you want and most Bernedoodles look good with any type of haircut. Also, since their hair grows quickly, it won’t be a big deal if one of your ideas doesn’t look great. Just try again in a month or two.

There are some staple Bernedoodle grooming styles but you don’t have to stick to those.  They are great go-to styles when you need something fast or you just don’t like stepping outside of the box. As long as your Bernedoodle is healthy, happy, and not matted you can’t go wrong. We hope you found some haircut styles that inspire your next grooming session!