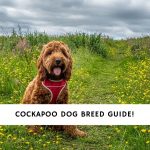 Mixed between a Cocker Spaniel and a Miniature Poodle, the Cockapoo was initially bred as a designer dog in the United States. When they were created in the 1960s, breeders were pushing for a companion dog with little to no genetic or health problems. Many dog enthusiasts around the world love Cockapoos! With the intelligence of a Poodle and the color/appearance of a Cocker … END_OF_DOCUMENT_TOKEN_TO_BE_REPLACED