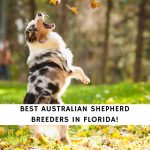 Let's go over the history of this breed before scrolling down this list of Australian Shepherd breeders in Florida. Identified as a breed in the early 20th century, the Australian Shepherd is a medium-sized dog developed in the United States. The breed's exact progenitors are still controversial because no one is sure of its association with Australia or the source of the … END_OF_DOCUMENT_TOKEN_TO_BE_REPLACED