Here’s what you need to know if you’re searching for breeders with Pointer puppies in Massachusetts for sale. The German Shorthaired Pointer is one of the most iconic hunting dogs. Originally bred to help Germans hunt all types of game in the terrain commonly found within the country, this breed gets its name from its role – remain on point while the hunter on foot has a chance to catch up.

However, these versatile puppies are capable of hunting and retrieving in addition to pointing. This is great for hunters, but it also makes them a challenging breed as house dogs due to their instinct to chase down prey and boundless energy reserves.

As a result, it is almost always recommended to take your GSP to a professional training class to ensure they don’t exercise this predatory instinct on your furniture – because they will.  Also, a word of caution – You must remain vigilant with your GSP around small children and animals.

They are great family dogs for their 12 to 14-year lifespan when trained, but it is important to remember that they are hunting dogs, and their instinct to hunt prey can result in them causing harm to children and other small animals. If you feel that you’re up to the task of looking after your very own Ponter puppy here in Massachusetts, check out these top breeders. 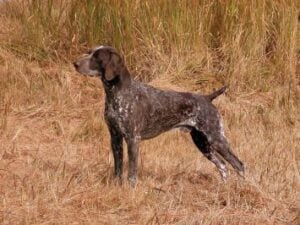 A German Shorthaired Pointer typically costs between $600 to $1,500 from a breeder. If you choose the adoption route, this price drops substantially, from $50 to $300.

With that said, there are instances where the price can exceed $1,500 if, for example, the parents of the puppy are champion show dogs or renowned in some way. 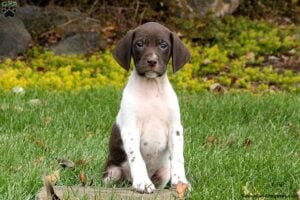 We’ve compiled a list of breeders dealing in Pointer puppies for sale in and around Massachusetts. If you feel you are ready for the responsibility of owning a hunting dog, then the German Shorthaired Pointer is an excellent choice. 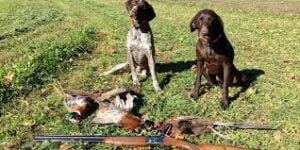 They even go so far as to state that hunting homes are preferred for their puppies. Regarding health checks, all of their dogs have undergone CERF eye testing, and have heart and HiP clearances. Huckle Hill GSP breeds 1-2 litters per year, and they are open to stud services.

Rhineland Acres, owned by Bill, is a farm, but they also breed Pointer puppies. Bill is an avid hunter, making the German Shorthaired Pointer a natural selection as a companion on his hunts.

At one to two litters per year, it can be a bit of a challenge to get a puppy from Rhineland Acres if you’re looking to bring one home with you the same day.

However, the same story applies to most smaller breeders who don’t have a habit of overbreeding their animals. Bill prides himself on having extremely gentle dogs, stating, “They are awesome with children, intelligent and loving.”

Despite this claim, we still urge caution with your Pointer puppies around children and encourage you to have your puppy professionally trained. Better to be safe than sorry, especially with how overwhelmed hospitals have been due to the pandemic.

Mariah Shorthairs, owned by Sandra Kretz, has been breeding Pointer puppies since 1974. They pride themselves on the fact that their German Shorthaired Pointers continue to look like the original German stock brought to the United States back in the 1930s. Sandra describes these puppies as being “solid, biddable, close working dogs for dense New England cover that is very much like that in Germany.”

With their history spanning 48+ years, Mariah Shorthairs has produced many:

Mariah shorthairs is also a part of the German Shorthaired Pointer Club of America, in which one of their dogs, Moraine’s Diamond Lil Mariah CD JH VC ROM, was awarded the highest honor of being added to the GSPCA Hall of Fame.

The dogs are held to the highest health standards and are registered with CHIC (Canine Health Information Center):

Last on the list of breeders with Pointer puppies in Massachusetts for sale is “New England Premier GSPs.” However, from what we can see on her Facebook page, Megan, her owner, is passionate and cares deeply for her GSP.

Many videos on her Facebook page show a very happy dog named Ruby that she intends to be the Dam of the puppies.

One such video shows her little tail wagging a mile a minute as she hunts for mice in the snow. It’s adorable. Ruby has just been certified as being an excellent candidate for breeding.

She was tested with:

Everything came back good, and so she selected the first stud, who resides in Maine. Both Ruby and her stud are AKC certified and have been trained like hunting dogs, with pheasant being the primary hunting game.

Conclusion For “Pointer Puppies in Massachusetts”

Pointer Puppies are a handful for new dog owners, at least until they are properly trained. If you have the time and temperament necessary to handle these dogs, they are your faithful companions and hunting partners.

The GSP is an incredibly loving dog to their owners, though, and if you can stick with them, they’ll make you laugh with all of the quirky ways they do things. It’s especially hilarious to see their tails wagging, making it clear they’re having a good time.

German Shorthaired Pointers want nothing more than to see you happy and be helpful to you as a partner on the hunt, and they’ll easily accomplish both. We’d like to make one final point before you go – this particular breed does best with a lot of lands to roam.

They have a ton of energy, and having the room just to run around helps keep their temperament under control. However, if you live in an area with only a small area for them, you’ll quickly find that they demand a lot more attention because they can’t run freely.

That, and they are a larger breed dog, so if you live in an apartment that prevents mid-sized or larger dogs, you’ll need to relocate before you can bring your Pointer puppy home.

For more guides similar to this list of breeders with Pointer puppies in Massachusetts for sale, you can check out:

Before you purchase a Pointer puppy from a breeder in Massachusetts, you can learn more about the breed by watching “Pointer Dog Breed – Everything You Need to Know” down below: