Warrior dogs are typically referenced as dogs that are used in warfare. A warrior dog isn’t a specific breed of dog, but rather, it is a collective name that has been given to dog breeds that have been purpose-bred for use during a war.

Warrior dogs have been trained in combat to be used as scouts, sentries, messengers, and mercy dogs (dogs that perform paramedic functions during wars). They are trained to guide medics to soldiers who required extensive care), and trackers, their uses have been different over time and some continue to exist in modern military usage. We have come up with a list of the best warrior dog names to help you choose a name for your next puppy!

Choosing a unique name for a warrior dog can be tricky as you don’t want to choose a name that will confuse the handler. Below are some names that you can choose from to name your canine.

Why were dogs used during the wars? 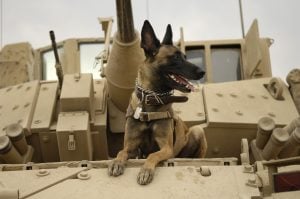 Dogs are special because their loyalty is second to none and their intelligence allows them to be trained to do anything as long as their physical features allow it.

Their senses are not only way ahead of that of humans (i.e. visual and smell sensory abilities), but they can easily gain access to areas where human soldiers cannot. They can also subdue or intimidate adversaries much more quickly with non-lethal force.

Because of these attributes, dogs have were often trained for military campaigns and conquests by military handlers during ancient times and even in modern armies. For instance, at the airport, it is not uncommon to see a police officer holding onto a dog.

The warrior dog serves as a sniffer for either drugs or bombs. These and other characteristics are why they are considered to be perfect soldiers to back up humans during war.

During world war II, when the US army initially kickstarted the K-9 corps, at least over 20 different breeds of dogs were accepted. Over time, the list was finetuned based on peculiar skills, and five (5) breeds were left. The breeds that were shortlisted are:

However, in recent times, the German and Dutch Shepherds and Belgian Malinois breeds have been chosen because they are very aggressive, smart, loyal, and also very athletic.

Also, according to AKC dogs were used “during the English War of the Roses (1455-85) – between the rival Plantagenet houses of Lancaster and York – the contending parties used mastiffs. Furthermore, it was said that English and European monarchs in the 16th, 17th, and 18th centuries brought dogs to the battlefields.

Another example is under the reign of King Henry VIII, over 200 mastiffs were said to have been shipped out to Spain, as the king’s gift to the Holy Roman Emperor Charles V to act as a support for him in his wars against France.

In conclusion, always remember that when choosing a warrior dog’s name, ensure that the name doesn’t conflict with other words and phrases of common usage during an action to avoid confusion which can potentially harm your dog. We hope that you found a name for your next puppy!