A Spoodle is a dog breed that is a mix between the Cocker Spaniel and the Poodle.  Throughout the world, they are commonly called the Cockapoo, Cockerpoo, Cockerdoodle, or Cocker Spaniel Poodle mix.  However, in Australia they are typically called the Spoodle.  The Spoodle is one of the top 5 Doodle dog breeds in the world because they are constantly happy, friendly, and great family members.  In addition, the Spoodle has fantastic genetic traits that make it nonshedding and hypoallergenic — this means that you’ll be vacuuming significantly less and sneezing a lot less.  Lastly, one of the most common reasons people buy a Spoodle is because they look like a little teddy bear.

Since the Spoodle is a crossbred dog, it will come in several different sizes and colors.  Their personalities tend to be highly sociable, energetic, but also very cuddly.  Because the Spoodle is a very friendly dog, they are incredibly easy to train, great with kids, and fun to be around.  We hope you learn something today about one of the most popular doodle dog breeds!

What is a Spoodle dog? 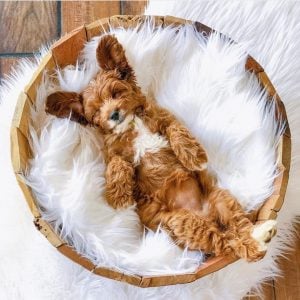 The Spoodle is a crossbred dog that is a mix of two extremely popular dog breeds: the Cocker Spaniel (either American Cocker Spaniel or English Cocker Spaniel) and the Poodle.  The Cocker Spaniel and Poodle are pretty different dogs in terms of personality and temperament, but they combine to make one of the cutest dog breeds in the world.  They are commonly known as the Cockapoo.

The Cockapoo is one of the smallest doodle breeds in the world, which makes them highly desirable for a lot of people who live in smaller living spaces.  Since they are also typically smaller in size, they have a lot less energy than some of the doodle dogs like the Goldendoodle and Labradoodle who will run around all day.  In addition, Spoodle dogs also come in several different desirable colors that people can choose from.

The exact origin of the Spoodle is really unknown, but they have started to become extremely popular over the last 15 years.  The idea of the “doodle” dog originated in the 1980s when Wally Conron tried to create a Labradoodle for a visually impaired pet owner who suffered from allergies.  The idea was a create a guide dog using the Labrador Retriever genes and combine them with a hypoallergenic Poodle!  Well, the idea worked, and today doodles are a very common dog breed.  This Cocker Spaniel and Poodle mix is simply one of the doodle dog breeds!  Let’s take a brief look at the history of the Cocker Spaniel and Poodle. 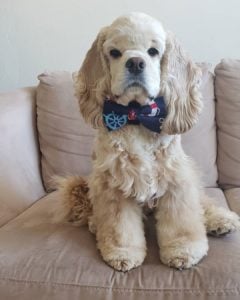 The Cocker Spaniel has a deep history dating back to the 16th century where they were frequently used for hunting birds like waterfowl.  Despite their small size, these dogs were outstanding bird hunters and would cause birds to “spring” out of their hiding places.  In 1935, the AKC officially recognized the English Cocker Spaniels as an official dog breed.  This small dog breed has evolved from being adept hunters to a gentle, smart, and happy dog breed.  They generally stand 15 inches at and weigh between 20 and 25 pounds. 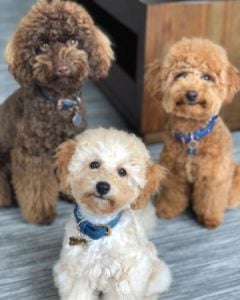 Poodles likely never existed in the wild by themselves but instead domesticated from various dog breeds including the wolf.  The earliest known beginnings of the Poodle was from a 15th century drawing from a German artist who tried painting the future of the world.  Since then, the Poodle has evolved from being a hunting, farming, and “guard” dog.  The Poodle is also a great swimming dog breed and would retrieve objects and animals from the water after being hunted.  Since the early roots of the Poodle, they have become the 7th most popular dog breed in the world because they are hypoallergenic and nonshedding dogs.  There are more than 10 official colors of the Poodle and several different sizes.

This Cocker Spaniel Poodle mix is an extremely popular doodle dog breed.  Like most doodle dogs, they aren’t officially recognized by the AKC because they are a crossbreed.  There are several different independent associations like the American Cockapoo Club, but there are no official establishments for the Spoodle.  Since the Cockapoo has become so well-known there are several different sizes and multiple different colors.  The three most popular sizes are below: 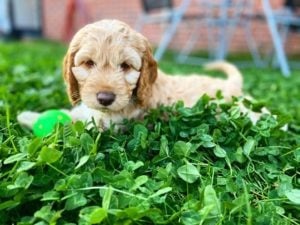 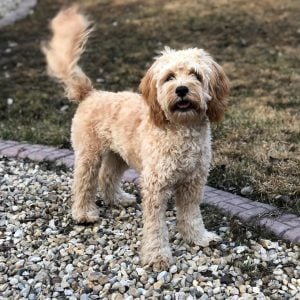 The Mini Spoodle size is the middle size of the breed.  Generally speaking, a Mini Spoodle will range in weight from 12 to 22 pounds and stand around 13 or so inches tall.  Since the Spoodle is one of the smallest doodle breeds, which means their miniature size is a lot smaller than a mini Goldendoodle or mini Huskydoodle.  There is no official or standardized size and weight, but instead is more of a rule of thumb.  The Mini Spoodle works great for people who want a dog that isn’t super small but also isn’t large enough to be intimidating. 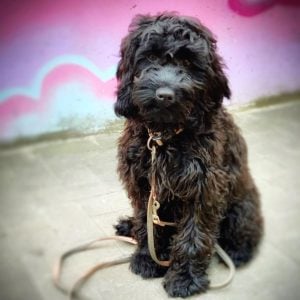 There are virtually infinitely many colors of the Spoodle since the Poodle has become so popular and has 10 different standard colors.  In addition, the Cocker Spaniel many different colors.  Some of the most common Spoodle coat colors are below: 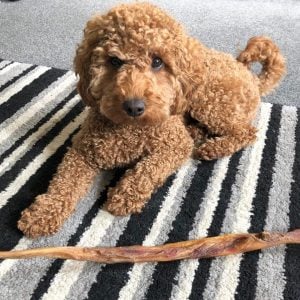 A golden Spoodle, also known as the apricot Spoodle, is probably the most sought after color because it reminds people of a teddy bear.  The AKC recognizes the Apricot Poodle color, but it is often mistaken for Golden Spoodle.  An apricot Spoodle will typically have black features like eyes, noses, and toenails.  The Golden Spoodle is one of my favorite colors because they sometimes have a white chest.  However, multi-colored Cockapoo’s are usually known as Parti Spoodles or Parti Cockapoos. 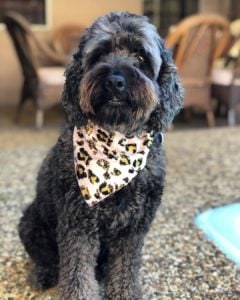 A black Spoodle is relatively popular, but black is a recessive gene so it is typically masked by other colors and is considered more “rare”.  Usually, pure black Spoodles are rarer than a multi-colored Spoodle.  When you get a black colored Spoodle, they will usually have some white mixed in on their chest.  The black color is usually bred from a black Poodle and darker colored Cocker Spaniel.  Black is common in a Parti Spoodle as well as all tri-color Cockapoos. 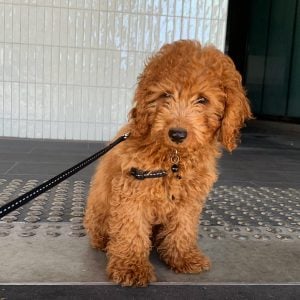 Red is the most vibrant Spoodle color because it is closest to the teddy bear and stands out amongst a crowd.  A red Spoodle isn’t a traditional bright red color, but more of a red-mahogany color.  A red Spoodle will be much brighter in color than a Golden Spoodle. 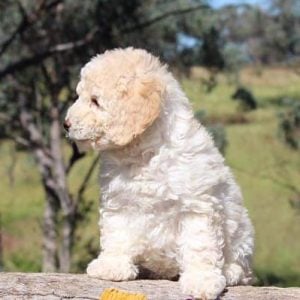 The chocolate Spoodle is like a darker colored teddy bear, and is sometimes called the brown Spoodle.  Typically, the chocolate Spoodle will have all chocolate or brown features including their noses and toes.  There eyes can typicaly range a variety of colors from green, blue, black, or brown which makes them so special.  Chocolate Spoodles are relatively rare since the darker brown color is usually a recessive gene that comes from the Cocker Spaniel.

Since the Spoodle typically doesn’t shed any hair, you will need to groom this dog every 6 to 12 weeks.  We have several grooming and shaving guides where you can try grooming your Spoodle dog yourself: Doodle Grooming Guide.  If your Cockapoo dog develops alot of mattes, you’ll have to shave your dog in which you can see our guide: Shave your Doodle.  Spoodle grooming isn’t too difficult once you practice and develop a process. 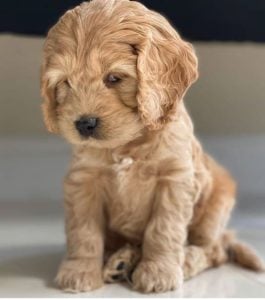 The average Cockapoo should live easier over 10 years as long as they are well-taken care both physically and mentally.  Since Spoodle dogs are a crossbred dog, they inherit a genetic called Hybrid Vigor which allows them to typically live longer than any of the parent purebreds.  Hybrid Vigor simply means that a crossbred dog will minimize the number of genetic defects and diseases that are passed along from a purebred dog.  This means that a mix of Cocker Spaniel and Poodle should have a long lifespan.

You’ve probably wondered what the terminology of the letters and numbers mean of a Spoodle when people say F1B Spoodle or F1 Spoodle.  The letter “F” stands for filial which just means the Cockapoo is a crossbred dog instead of a purebred.  The number (1 or 2 or 3) is the generation of the Spoodle.  The letter “B” stands for backcrossed, which means that it was breed with a 100% purebred dog, typically to the Poodle.  The genetic percentage of each Spoodle Generation is below:

Please reference our Best Doodle Generations article for all the details regarding generations of Doodle dogs.  In general, people typically want to purchase a Spoodle dog that has a significant amount of Poodle genetics because they are more nonshedding and hypoallergenic.

Should I get a Spoodle dog?

Spoodles are a perfect dog to get because they’re sweet, smart, and train really fast. They also inherit some pretty strong genetic characteristics because they don’t shed and are allergy-friendly.

There are other downsides to the Cocker Spaniel and Poodle mix, however. First, Spoodles require grooming every 6 to 12 weeks to prevent mattes and tangles in their fur. That includes daily brushing, regular haircuts, and regular trimming of nails. This will take up a significant amount of your time and is absolutely necessary to keep your dog healthy and happy. Second, the Cocker Spaniel Poodle mix has tons of energy and will run around a lot. If you don’t lead an active lifestyle then a Cockapoo might not be the right dog for you.  Overall, this crossbred is a pretty sweet dog though and is extra cute!

Spoodles not only look like sweet little teddy bears, but behave like them as well. The Cockapoo’s cuddly and sweet personality makes them the perfect dog for families and kids. Moreover, this type of dog is perfect for people with pet allergies and want a dog that doesn’t shed hair. Since this is not a purebred dog, however, it is nearly impossible to predict the Spoodle’s coat color, temperament, and personality. In general, these are very adorable dogs that are nonagressive and small in stature.  They would make a perfect addition for most households.

Other articles for you:

In general, Spoodles are very light shedders.  If you get a Cocker Spaniel and Poodle mix that has a significant amount of Poodle traits then it is likely that they won’t shed at all.  You can tell if your Spoodle has a lot of Poodle genetics because their coat will be wavy or curly.

Is a Spoodle dog hypoallergenic?

Spoodles are considered hypoallergenic because it inherits genetic traits from the Poodle.  However, no dog is 100% hypoallergenic, but the Spoodle is as close as you can get.  So if you have pet allergies and really want a dog then a Cockapoo might be the right dog for you.

Spoodles are extremely smart.  They get genes from two of the smartest dog breeds in the world (Poodle and Cocker Spaniel).  Thus, they are easy to train dogs.