If you’re in search of a beautiful pearly coat and affectionate companion to bring home to your family, then a White Labradoodle could be what you’re looking for. Labradoodles come in a variety of colors and white happens to be one of the most popular. Without a doubt, the White Labradoodle has a captivating coat that’ll catch the attention of numerous people and resemble a polar bear.

While they’re astonishing, white coats typically require more grooming maintenance than other coat colors. Before you make the decision of bringing home a Labradoodle with a white coat, there are several responsibilities and expectations to keep in mind. If you’re able to manage these responsibilities, then prepare for an avalanche of compliments from countless dog lovers.

How Do White Labradoodles Get Its Color?

When the genes of a Labrador Retriever and a Poodle are combined, it’ll result in a Labradoodle and the colors of its coat depend on the more dominant gene. Genetically, every dog’s complexion originates from two pigments within their skin cells:

Variations in either pigment supply during a Labradoodle’s growth will determine its final coat tone by the time they reach adulthood. However, what’s intriguing about this is how the snow-colored White Labradoodle gets its coat color. A white Labradoodle typically get’s its coat color from a lighter-colored Labrador Retriever like yellow, cream, or white. When mixed with a lighter colored Poodle like apricot, white, silver, or grey, you will usually get some Labradoodle puppies with a white coat.

It’s also worth noting that English Labrador Retrievers have become extremely popular and they have a cream-colored coat. These genetics are usually passed down to the offspring which results in a white-colored coat.

It’s also worth noting that if you have an albino Labradoodle, they would have white eyes and noses. Most Labradoodles with a white coat color are not albino and it’s just the color of their coat. The color of your Labradoodle’s coat also has no effect on their temperament or personality.

Does a White Labradoodle’s Color Fade?

One exceptional quality of White Labradoodles is that their furs colors generally remain the same from a newborn puppy to adulthood. Lighter-colored Labradoodle owners are lucky in this regard because other Doodle puppies have a high chance to transform into an entirely different color when fully grown. You generally see darker-colored Labradoodle coats fade a couple of shades.

White Labradoodles are just like regular Labradoodles. They don’t differ in behavior from others of their kind. However, most puppies will embody their parents’ dominant characteristics. Understanding the parent breeds’ behavior can help give you a hint of what to expect from your new White Labradoodle companion. Aside from specific genetic quirks deposited from parent genes, Labradoodles exude an affectionate aura.

Labradoodles don’t display aggressive tendencies compared to other dog breeds, and they’re usually warm and friendly towards strangers. With the proper guidance and training, your Labradoodle will do wonders because you’re building your companion’s habits into a submissive and obedient house companion. When your White Labradoodle has exposure to children, crowds, and other household pets – your companion will become more confident in its socialization skills.

Many people advise training dogs when they’re still a puppy because they don’t have any habits yet. If you wait for your White Labradoodle to become an adult, training it would be more difficult because they would have already developed habits by then. During your training session, try providing your Labradoodle companion with dog treats whenever you see any good behaviors. Use positive reinforcement training methods.

Owning a White Labradoodle comes with more grooming responsibilities because of their curvy and wavy coat. Imagine your puppy’s clear and milky coat being stained for days with dirt and mud. Of course, every owner wants their companion to have a clean appearance. These responsibilities include brushing, hair clipping, and finding any spots that require maintenance. You want to keep an eye out for tangles and mats.

White-colored Labradoodles owe their milky coats to the absence of two naturally occurring pigments in dogs—eumelanin and pheomelanin. Although rare, the lack of pigmentation can affect the auditory canal’s sensory nerves, leading to partial or total deafness.  Furthermore, if the cells responsible for pigmentation in a white-toned Labradoodles eyes are not available in adequate proportions, your puppy could possess a deteriorated vision.

The best way to avoid buying a Labradoodle with genetically-induced deafness is to ascertain it has no hearing disability before making any payments to a breeder. Apart from issues resulting from pigmentation deficiency, there isn’t any illness associated with the white Labradoodle that isn’t common in other breeds of its kind. Some of the common illnesses all-white Labradoodles have originates from the parent breeds. A good example of this is hip dysplasia, which is peculiar to Labrador Retrievers. Another illness Labradoodles are susceptible to is bloating, a typical problem associated with its parents. 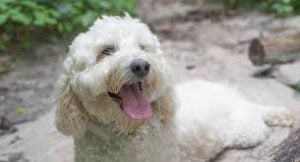 Many people view the White Labradoodle breed as a cute polar bear. The White Labradoodle’s coat requires proper maintenance to retain its appealing appearance. Apart from regular grooming and training, the rewarding experience of raising a companion will outweigh the responsibilities. Health issues to the Lab’s white no-pigment coat can be reduced by making sure your companion is healthy. Feeding your Labradoodle the property dietary needs and help them exercise will ensure a longer and healthier life.

If you’re planning to purchase a Labradoodle companion from a breeder and the cost seems too good to be true, it’s most likely is. As with all dog breeders, you should always do your due diligence before buying your Labradoodle. There are numerous puppy mills breeding Labradoodles for unethical purposes. For reliable breeders, check out our list of Mini Labradoodle breeders in the United States!

For more Labradoodle information, check out other articles from WeLoveDoodles:

To learn more about the Labradoodle, watch “Labradoodle Top Facts” from Dogs Wiz down below: